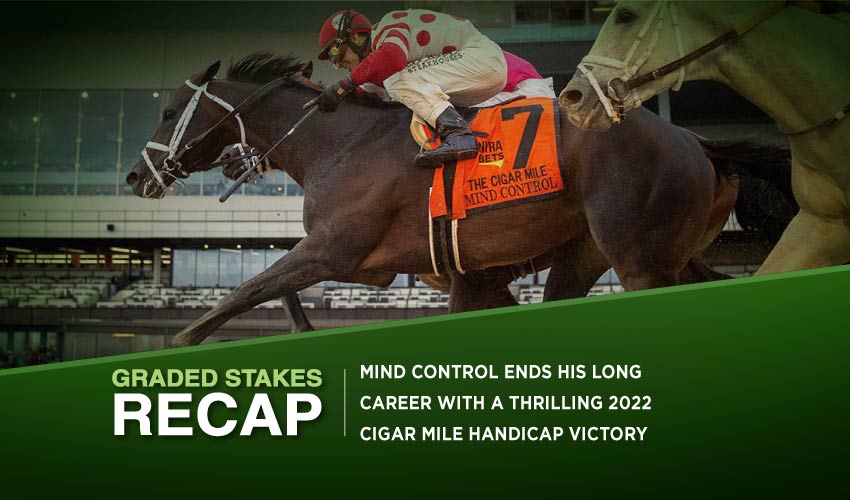 It was a day of ‘goodbye’ and ‘hello there’ at Aqueduct on Saturday, with pride of place belonging to Mind Control, who fought hard to win the feature G1 2022 Cigar Mile Handicap on his final start before retirement.

Two potential classic contenders announced their arrival on the scene, with Dubyuhnell (G2 Remsen) and Julia Shining (G2 Demoiselle) prevailing in tight finishes, while the victory of Dr B in the G3 Go For Wand was notable for it also being jockey Irad Ortiz’s 77th stakes win of 2022, a new single-season record.

That’s the way to do it. Like every veteran performer with a sense of time and place, Mind Control brought down the curtain on a fine career in the right way, with a thrilling victory in the Cigar Mile at a sloppy-track Aqueduct on Saturday.

It was the six-year-old’s final start before taking up stallion duties, and he advertised his potential to every mare owner out there with a typically gritty, game success. The 3-1 second-choice pressed the pace until the top of the lane and then went forward as challengers closed in on both sides.

“If you like horse racing, you’ve got to love this horse,” said trainer Todd Pletcher, winning his sixth Cigar Mile. “He’s done it consistently year after year at multiple distances, and is the type of horse that if you get into a battle with him, he’s going to fight.”

That fight took Mind Control through a 29-race career that brought 12 wins and more than $2.1 million in purses, with G1 success in the 2018 Hopeful and 2019 H Allen Jerkens to sit alongside this valedictory triumph.
“I’m a little sad to see him go,” said Velazquez. And so say all of us.

There was another spellbinding duel in the Remsen, in which Dubyuhnell and Arctic Arrogance drew well clear of the field as they chased the additional carrot of ten ‘Road to the Kentucky Derby points on offer to the winner.

The race was all about these two from as early as the clubhouse turn, with Arctic Arrogance in the lead and 4-1 third-choice Dubyuhnell at his girths all the way down the backstretch. They hooked up in the lane and for a moment there seemed absolutely nothing between them, but Dubyuhnell steadily asserted under Jose Ortiz in the last sixteenth and tightened his grip to win by a half-length, stopping the clock in 1:50 and four-fifths.

“He was drawing off and he wants this sort of distance,” said trainer Danny Gargan. “Now we just have to stay sound and stay lucky and keep picking the right races. Maybe we’ll be somewhere in May.”

The sloppy surface was no issue for Dubyuhnell, who had broken his maiden over a wet track here in October. He could return to the Big A for the G3 Withers on February 4.

Two years ago future champion Malathaat won the Demoiselle, and on Saturday her little sister Julia Shining followed suit in another stand-up finish on a day full of narrow margins.

That result didn’t look likely on the far turn, as the 1-2 favorite had only one horse behind her and was being driven hard by Luis Saez.

She came widest of all into the stretch and still had a lot to do, but as soon as they straightened up she was out of the kickback and put her best foot forward, grabbing the lead at the sixteenth pole and driving on to win by a neck from the maiden Affirmative Lady in 1:53 and change, with her barn mate Gambling Girl three-quarters of a length away in third.

“She has a ton of natural talent,” said trainer Todd Pletcher, signing for his eighth Demoiselle. “We knew from her debut that she didn’t like the kickback, and the only way to get her into the clear was to go wide, but she’s got so much stamina that we knew the mile-eighth would play to her strengths.”

Julia Shining is now unbeaten in two and earned ten ‘Road to the Kentucky Oaks’ points with this success. Big sister Malathaat won the Kentucky Oaks, and little sis is now a leading contender to maintain the family honor.

Dr B was very impressive in victory in the Go For Wand but the real headliner was jockey Irad Ortiz, who set a new North American single-season stakes record when bringing home winner number 77.

And it couldn’t have been more straightforward, with Dr B fast from the gate and uncatchable after that.

The 3-1 second-choice set sizzling fractions – 45sec for the half-mile – and drew right away in the stretch to score by four and a quarter lengths in a final time of 1:35 and one-fifth.

They were well strung out behind, with favorite Bank Sting grabbing the place slot three and three-quarter lengths ahead of Betsy Blue.

“This is an amazing feeling,” said Ortiz, who won the G1 Belmont Stakes on Mo Donegal and harvested three Breeders’ Cup races with Forte, Elite Power, and Goodnight Olive. “I’m so happy just to be a part of this – I love this sport.”

Dr B, trained by Robert Reid, was making her stakes breakthrough after some near misses and will stay in training next year.

Stay tuned for the latest Kentucky Derby Odds. Check out the Horse Racing Results for all major Racetracks. Sign-up and get up to a 10% horse rebate. We offer the best horse rebate, in the Industry!