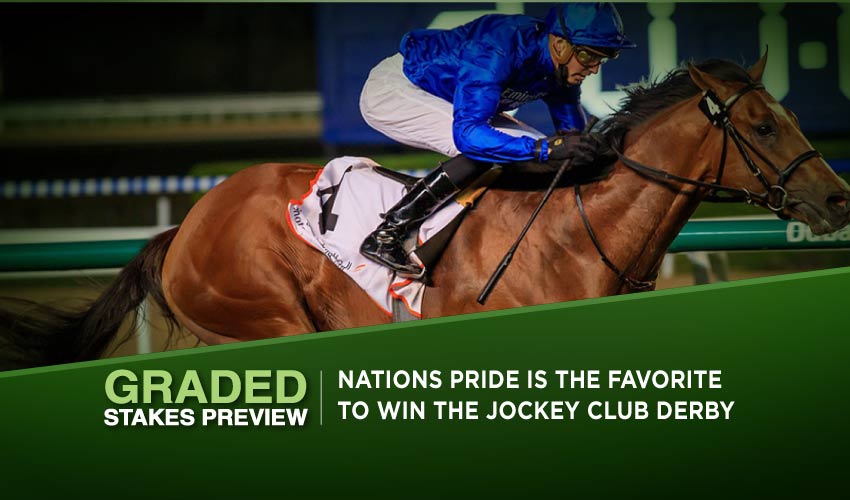 The two Turf Triples reach a climax at Aqueduct on Saturday, a meet moved from Belmont Park owing to construction work. Classic Causeway and Nations Pride go head-to-head for the third time, with the score at 1-1, in the 2022 Jockey Club Derby, while Belmont Oaks winner McKulick takes on progressive German raider Toskana Belle in the G3 Jockey Club Oaks.

This works two ways – seconds out, round three! The 2022 Jockey Club Derby, the main event at Aqueduct on Saturday, is the third leg of the valuable Turf Triple, and it also showcases the deciding rubber in the head-to-head between the winners of the previous legs of the Triple.

At Belmont Park in July, Classic Causeway won the ten-furlong G1 Belmont Derby by three-quarters of a length from Nations Pride; at the Spa in August, Nations Pride got his revenge in the mile and three-sixteenths G1 Saratoga Derby, winning by a length and three-quarters with Classic Causeway another head away in third. Which way will it go this time?

The main sticking point is the distance, a mile and a half, two furlongs further than Classic Causeway – reinvented as a turf horse after his move to Kenny McPeek – has ever gone before. He has to have the lead but he won’t need to set a fast gallop and could get his own way out there, although (like the vast majority of US horses) he doesn’t seem a natural fit at this distance.

Nations Pride went a mile and a half in the G1 Derby at Epsom but finished eighth with either the distance or the uniquely weird track preventing him from showing his best. If the former, then he’ll struggle today, if the latter, then he’s in pole position, as there’s an argument for saying he’d have beaten Classic Causeway at Belmont if he’d had the run of the race and, pound-for-pound, he’s probably the better horse.

These two bring the class, whereas German raider Ardakan brings proven staying power. He won the G2 Italian Derby over a mile and three-eighths in May, but that’s not a strong race and his chance here rests on his third place in the G1 Grosser Preis von Berlin at Hoppegarten last month.

That was a mile and a half and he saw it out well, keeping on to be two lengths behind the very progressive Rebel’s Romance, a barn mate of Nations Pride. If the ‘big two’ run out of gas, Ardakan could well pick up the pieces.

It’s very hard to give the others a chance – Wicked Fast doesn’t live up to his name and has never been further than the mile-eighth at which he won a Belmont allowance, his career-best; Irish import The Grey Wizard was not in the same universe as Nations Pride back home and finished a nose ahead of Daunt when they ran fourth/fifth in an allowance at Saratoga last month. They can’t be considered against these G1 runners.

There is a query over his stamina, but NATIONS PRIDE has a class edge over his rivals and can get the better of Classic Causeway for a second time.

The distaff equivalent, the Jockey Club Oaks, has strong parallels with the colts’ race, in that there’s an established Graded-stakes duo including a Godolphin runner, a wildcard from Germany, and half the field making up the numbers without entertaining much of a shot at the winner’s circle.

It’s not unusual to start the process with a Chad Brown filly on the upgrade, with McKulick easing her way through the distaff Turf Triple with almost flying colors. She stalked the pace before finishing off well to win the ten-furlong G1 Belmont Oaks at the ‘Big Sandy’, then used the same tactics in the mile and three-sixteenths G3 Saratoga Oaks but came up short by a length and three-quarters, beaten by the filly she’d beaten at Belmont.

There’s no doubt about McKulick’s class or the likelihood of further progress after just six races, but the obvious question is the extra furlong, although her tactical profile indicates that she’ll sit in behind and pounce late, giving her a fighting chance of seeing it out.

Godolphin representative Nostalgic was beaten out of sight by Nest and Secret Oath in the G1 CCA Oaks at Saratoga and then suffered the same fate in the G1 Alabama at the same track.

This is more her ballpark and she has often seemed the sort of grinder who would be happy stretching out, but she switches surfaces here and finished stone last in the G3 Sweetest Chant at Gulfstream Park on her only previous start on the weeds.

That was over today’s distance on good ground, so race conditions should be ideal, and she was on the pace throughout, driving clear two furlongs out before idling through the closing stages. If she’s given too much rope here she has the class to stay away.

The combination of Todd Pletcher and Flavien Prat will catch a few eyes but Beside Herself doesn’t have the resume to back it up, although she won’t want for stamina after winning an allowance optional claimer at Saratoga over a mile and a half.

On her last start in Graded company, she finished six and a quarter lengths behind McKulick in the G3 Regret at Churchill Downs and needs to do much better.

Fellow Saratoga AOC winner Canisy goes another two furlongs today and was well beaten in stakes company on her most recent start, and along with Miss Yearwood, winner of a mile-sixteenth Ellis Park allowance on her first run on turf could be out of her depth now.

The progressive German shipper TOSKANA BELLE is already a G1 winner has no stamina issues, and her front-running tactics can prove decisive.