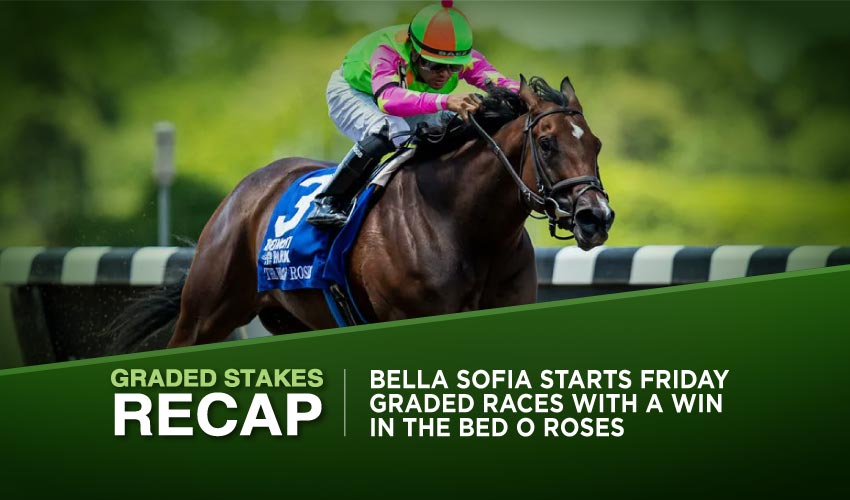 High-class fillies and mares ruled the roost at Belmont Park on Friday, with pride of place going to the magnificent Bleecker Street, who is now unbeaten in seven after surging home for a narrow win in the G1 New York. Fellow distaffers Bella Sofia (G2 Bed O’Roses) and Caravel (G3 Intercontinental) never saw another rival as they posted gate-to-wire victories, while Jackie’s Warrior was his usual brilliant self when blowing apart the G2 True North. There was a notable overseas triumph too, with the German-trained Loft dominant in the G2 Belmont Gold Cup.

How far can she go? Bleecker Street extended her unbeaten run to seven on her first start at the top level when going back-to-front in the New York, the highlight at Belmont Park on Friday.

The grey filly, the 5-2 second-choice and one of a four-strong entry from Chad Brown and owner Peter Brant, was stretching out to this distance for the first time and relished the extra yardage, sitting in last place to the top of the lane under Irad Ortiz before coming wide on the turn and inhaling all her rivals with a powerful stretch run.

She caught Family Way close home to win by a half-length, stopping the clock in 2:02 and one-half, with long-time leader and barnmate Flighty Lady a neck back in third. Odds-on favourite (and another barnmate) Rougir never fired, finishing fifth.

“What a remarkable horse,” said Brown, winning the New York for a joint-record fourth time. “She’s moved up through the ranks and is one of the better ones I’ve ever had.”

The Belmont Gold Cup is usually booked for export and so it went again, with the prize heading to Germany after Loft set a new track record on his way to a dominant victory.

On his first start outside Europe, the progressive four-year-old raced some way off the pace set by the favorite Abaan before making a looping move into contention around the turn. Strong Tide held a clear advantage in mid-stretch but the 5-2 second-choice ran him down in eye-catching style to win going away by three and a quarter lengths, with British Royalty coming along late to steal second from Strong Tide by a nose. Abaan faded into fifth.

The clock showed 3:16.68, a new best, and this was another big-race success for trainer Marcel Weiss, who won last year’s G1 Prix de l’Arc de Triomphe at Longchamp with the 72-1 longshot Torquator Tasso.

“I trusted him,” said jockey Andrasch Starke. “I didn’t want to get in a hurry. I was travelling well around the bend and he ran a very good race.”

Warrior on the charge again

Last year’s champion sprinter Jackie’s Warrior gave notice that it will take something very special to steal his crown when demolishing the opposition in the True North, underlining his 1-5 odds with an exhilarating display of speed.

It looked easy on paper beforehand and it was easy on dirt too, as the four-year-old made light of a bump leaving the gate by going swiftly to the lead. That was that, catch him if you can, and they couldn’t get near him. Jackie’s Warrior cleared right away around the turn and was eased in the final sixteenth to keep the winning margin down to five lengths over Sound Money, with the longshot War Tocsin seven lengths back in third. The stopwatch showed 1:15 and change.

“He’s unbelievable,” said jockey Joel Rosario. “I looked back and was so far in front so decided to save some for the next race. He’s special.”

That next race is likely to be the G1 Alfred G Vanderbilt over six furlongs at Saratoga on July 30, with trainer Steve Asmussen working towards the Breeders’ Cup Sprint at Keeneland in November. Last year’s BC Sprint was Jackie’s Warrior’s only defeat in his last seven starts; he is now 11-for-15 lifetime.

Pace makes the race and it made the Bed O’Roses for the ever-willing Bella Sofia, who rolled gate-to-wire against just three rivals to win for the fifth time in her last six starts.

The only recent blemish on her record is a below-par showing in the Breeders’ Cup Filly & Mare Sprint, but Bella Sofia banished those blues with a gutsy success. The 3-5 favourite broke on top under Luis Saez and surged clear at the top of the stretch, being eased down in the closing stages and holding on by a half-length from the rallying second-choice Obligatory, in a time of 1:21 and two-fifths. Glass Ceiling was more than ten lengths adrift in third.

“I think we made a mistake bringing her back so soon [four-week break],” said trainer Rudy Rodriguez of his G1 Test winner, who is now five-for-six at Belmont Park. “She looked like she got a little tired, but she’s just a special horse, the horse of a lifetime.”

The place to be in Friday’s sprint stakes was on the lead, and Caravel became the third all-the-way winner of the day when wiring the field in the Intercontinental, her second success at this level and her first since the Caress at Saratoga last July.

The five-year-old was 5-2 favourite and justified her market position with an unflashy but thoroughly effective performance, towing them along with brisk fractions under Tyler Gaffalione, digging in hard through mid-stretch and driving a length clear at the line, stopping the clock in 1:07 and three-fifths. Star Devine, who found a good route through on the fence, held on to the silver medal by a nose from the rallying Jouster.

“She showed today that she’s one of the best in the division,” said trainer Brad Cox, making the point that his mare is unbeaten in her last five starts against distaffers. “I was surprised to see her on the lead, but she was pretty comfortable and had enough to finish it off.”

Stay tuned for the latest Breeders Cup Betting Odds. Check out the World’s major Racetrack entries and don’t forget to Sign-up and get up to a 10% horse rebate. We offer the best promotions