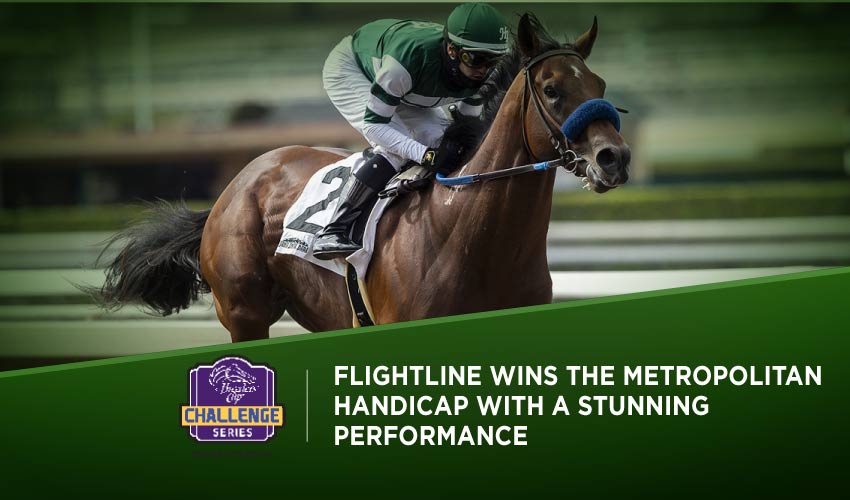 The reappearance of the mighty Flightline was the big news on the undercard at Belmont Park on Saturday, and the big horse didn’t disappoint when romping to a six-length score in the 2022 Metropolitan Handicap. Elsewhere, sprint star Casa Creed signed for his second successive victory in the G1 Jaipur Stakes, while the progressive Clairiere finally got the better of her old nemesis Malathaat after a thrilling stretch duel in the G1 Ogden Phipps.

Flightline takes off again | G1, $1,000,000, 1m, 3yo+
Believe the hype. We have waited all year to see Flightline again, and the freakishly brilliant unbeaten four-year-old was certainly worth that wait as he produced another stunning performance to win the 2022 Metropolitan Handicap at Belmont Park on Saturday.

It turns out that plan B is just as effective as plan A. Flightline was slow from the gate and found himself eating dirt for the first time in his career, but the class will out and he has a ton of it. The 2-5 favorite cruised past Speaker’s Corner and into the lead around the turn and drew off with the minimum of fuss, pulling six lengths clear under a hand-ride, stopping the clock in 1:33 and three-fifths. Happy Saver ran down Speaker’s Corner to take the silver medal by two and three-quarter lengths.

“He didn’t break well but soon after that, he was traveling well. He’s just an incredible horse,” said jockey Flavien Prat of the Californian monster, who has won his four races by an aggregate of 43 and a half lengths.

This was the second G1 score for the Tapit colt on his first excursion outside his home state after he pulverized the opposition in the Malibu at Santa Anita in December. The Met Mile was a much bigger test, and Flightline passed with flying colors.

“He overcame trouble, that’s the storyline,” said trainer John Sadler. “He had a rough trip, took up a couple of times, but still circled around and proved much the best.”

Flightline is now the early favorite for the Breeders’ Cup Classic at Keeneland in November, even though victory in the Metropolitan earned him a free pass for the BC Dirt Mile. There is plenty of running to do before then, though, with the G1 Pacific Classic at Del Mar on September 3 – meaning a step up to ten furlongs – his likely next objective, although the G1 Whitney at Saratoga on August 6 is a possibility.

Sweet revenge for Clairiere | G1, $500,000, 1m 1/2f, 4yo+ fillies/mares
If at first, you don’t succeed, try, try and try again. Clairiere had finished behind Malathaat in all four of their meetings during their sophomore year but finally got her revenge in a thrilling finish to the Ogden Phipps.

Clairiere, the 9-2 third-choice, was sensibly kept well away from the speed duel that fatally compromised the chance of odds-on favorite Letruska, who went ‘pop’ around the turn as her dueling partner Search Results went on, and the action was all in behind as Clairiere and Malathaat came running nose-to-nose down the stretch.

They ran down the tiring Search Results in the last sixteenth and Clairiere proved just the stronger in the last few jumps, getting home by a head from her old rival. Search Results, who ran a gallant race, was two and a quarter lengths back in third; the time was 1:41 and change. Letruska walked across the line, the last of five.

“I was following Johnny [Velazquez] the whole time but he was tough to beat,” said jockey Joel Rosario. “For a second I thought he might get me again, but she really responded well.”

It was the second G1 success for Clairiere following her win in the Cotillion at Parx Racing in September, and it earned her a fees-paid berth into the Breeders’ Cup Distaff, in which she finished fourth last year.
“She was a wonderful filly last year, but she’s faster now than she was then,” said trainer Steve Asmussen. “She’s racing royalty, the race she put together was beautiful.”

Before Keeneland in November, Clairiere will be pointed towards the G1 Personal Ensign at Saratoga on August 27, in which she is expected to hook up with Malathaat yet again, with the runner-up likely to be fitted with blinkers to improve her concentration.

Creed at the double | G1, $400,000, 6f turf, 3yo+
Same time, same place, same race. Casa Creed got back in the groove after a winless 12 months when coming home strongly to record back-to-back victories in the Jaipur, in the process earning himself a free pass into the Breeders’ Cup Turf Sprint.

True Valour and the favorite Arrest Me Red were quick from the gate and ran no more than a half-length apart the whole way around. They were still out there in deep stretch but Casa Creed was coming, the 4-1 second-choice switched off the rail by Luis Saez to deliver his challenge and then surging past the leaders to win by a half-length, with Arrest Me Red getting the better of his tenacious pace rival by the same margin. The stopwatch showed 1:07 and two-fifths, half a second faster than last year.

“We finally found out what he wants to do. He wants to run in the Jaipur every year,” chuckled trainer Bill Mott. “He’s a real warrior who’s got better with age.”

Both of Casa Creed’s G1 wins have come in the Jaipur, and this was a welcome return to his best after a five-race losing streak that included a heavy defeat in the Breeders’ Cup Mile. The six-year-old is better suited for sprinting although he lacks the raw sizzle for five and a half furlongs, the distance of the BC Turf Sprint at Keeneland this year.

“He’s best at six and seven furlongs, so it’s a problem,” added Mott. “If I had to say right now which Breeders’ Cup race he’d run in, I’d say probably the Mile.”

There is no race at his preferred distance at Saratoga, so Casa Creed is likely to return to a mile for another crack at the G1 Fourstardave at the Spa on August 13, in which he finished third last year and also the year before.