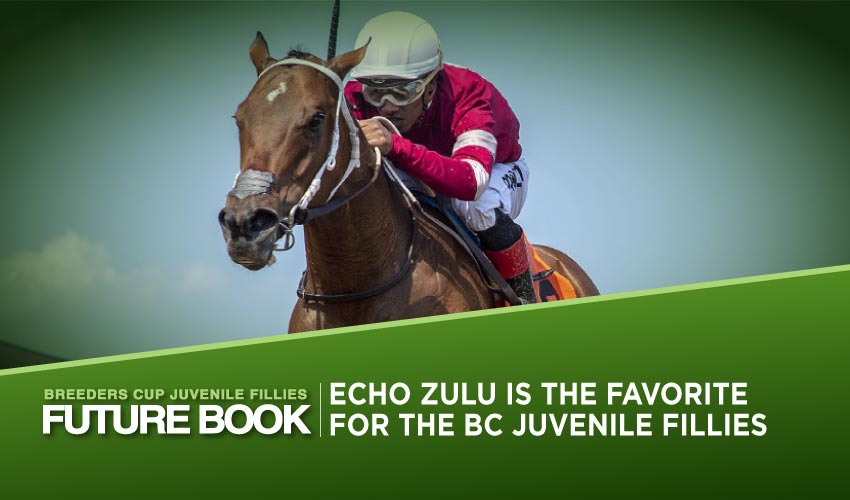 The pre-entries for the Breeders’ Cup are now available and the races have begun to take their final shape. Here we assess the candidates for the BC Juvenile Fillies, the second Cup race staged at Del Mar on Future Stars Friday.

With only nine pre-entries taken for the BC Juvenile Fillies, and one of those a second preference, the race will have one of the smallest fields of the weekend, although there is plenty of quality on display with four horses in serious contention for the prize.

This race showcases one of the heaviest favourites of the whole meeting in the unbeaten Echo Zulu (+110), who is three-for-three with two Grade 1s already in the bank. The daughter of freshman sire sensation Gun Runner has dominated her division thus far with big-race victories in the Spinaway at Saratoga in September and the Frizette at Belmont Park a month later, and has run higher Beyer numbers than any of her opposition here.

In the seven-furlong Spinaway she led at every call and drew off from mid-stretch to win by four lengths from Tarabi; in the Frizette over a mile she again went gate-to-wire, driving more than seven lengths clear at the line. Echo Zulu has been utterly dominant at every moment of her career – she won on debut at Saratoga by five and a half lengths – and the only tweak here is the two-turn route at Del Mar, although it’s clutching at straws to imagine that will make a big difference to her.

The short field – relatively speaking – makes it less likely that she’ll be taken on for the lead and trainer Steve Asmussen will be confident of adding to his previous win in this race, ten years ago with My Miss Aurelia.

Wide-margin Ellis Park maiden winner Juju’s Map (+300) moved right up on her next start when an authoritative winner of the Grade 1 Alcibiades at Keeneland over a mile-sixteenth, stalking a fast early pace before taking over just after halfway and powering clear off the turn to win by more than four lengths.

There was a lot to like about that run, not least the strength she showed in the stretch, and if there are any holes in Echo Zulu towards the end of a hard race then Juju’s Map has the staying power to find them. She’ll stalk the favourite and will be a big threat if in range at the top of the lane; trainer Brad Cox won this race two years ago with British Idiom.

The most arresting visual display of any of the contenders may have come from Hidden Connection (+350), who tore the field apart in the Grade 3 Pocahontas at Churchill Downs over a mile-sixteenth, going clear on the turn and barrelling down the stretch to win by more than nine lengths.

It’s impossible to fault a filly who has won both her races by an aggregate of almost 17 lengths, but this will be a tougher test. The Pocahontas was not particularly competitive and this will require a step up, although her proven stamina and two-turn experience will be valuable. She’ll sit in behind the pace, try to blow them away around the turn, and will still be running at the wire.

California trainer Phil D’Amato is doubly represented, with the unbeaten Ain’t Easy (+500) his leading hope following her victory in the Grade 2 Chandelier at Santa Anita over a mile-sixteenth, in which she belied her name when making it look simple, grabbing the lead after a half-mile and then hauling off to win by almost five lengths.

A winner over a sprint trip at Del Mar on her debut, Ain’t Easy has plenty going for her but the Chandelier was a bit of a crawl and she’ll need to cope with a faster pace here, and perhaps the west-coast set hasn’t been as strong as the eastern sorority this year. Barnmate Desert Dawn (+3500) was a longshot third in the Chandelier, beaten six lengths and nearest at the wire, and although she has a win at Del Mar on her resume she makes little appeal to add to her track record here.

One that may appeal to exotics players is Tarabi (+1300), who won her maiden by five and a half lengths at Ellis Park and was then thrown into the big league of the Spinaway at Saratoga, in which she acquitted herself very well to be runner-up to Echo Zulu, beaten four lengths. It was a fine effort, but on that basis she has a mountain to climb to flip the form with the winner and also has a two-month layoff to overcome, although she’s no throwout.

Todd Pletcher, who perhaps surprisingly has yet to win this race, commits Nest (+3000) to the fray off the back of her debut win in a Belmont Park maiden over a mile-sixteenth. The sister to Classic longshot Idol was a heavy favourite and won very easily by five lengths, but only four horses finished that race and it bore no comparison to the test awaiting Nest here. She will no doubt improve, but this is the biggest race of the year in the division and she could look out of place.

Colonial Downs maiden winner Sequist (+3500) was beaten more than 12 lengths by Echo Zulu in the Spinaway and then finished four and a half lengths behind Juju’s Map in the Alcibiades, and on all known evidence doesn’t have what it takes to win a championship Grade 1 at this stage of her career.

The unbeaten Cairo Memories (+3500) is a stakes winner at Santa Anita on turf, has never run on dirt, and her first preference is the Juvenile Fillies Turf.

Betting Prediction for the BC Juvenile Fillies

The four leading contenders are strong, especially the powerful stretch runners Juju’s Map and Hidden Connection. Nothing has left such a deep impression, though, as ECHO ZULU, and although there will be no prizes for originality she is a straightforward choice to stretch her winning streak to four

Get a Daily Rebate and make sure to stay tuned for the latest Breeders Cup Horse racing odds, Races results and racing entries.

Follow us on Social Media for instant BC Juvenile Fillies updates!