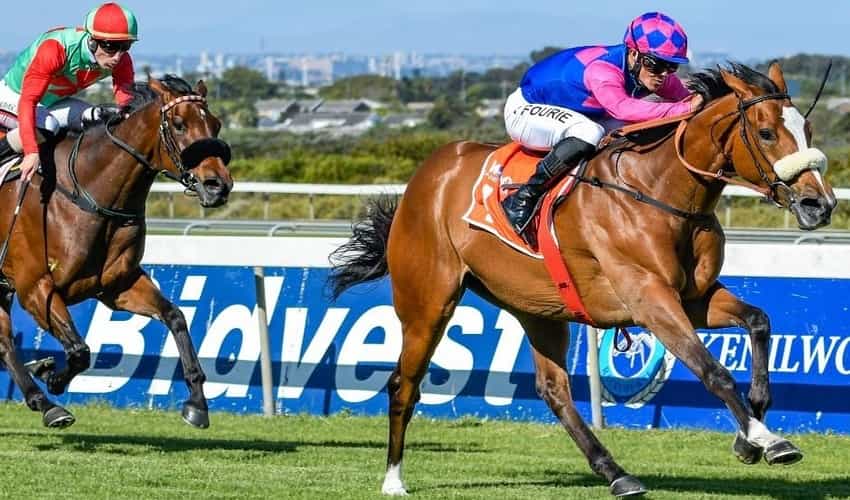 Successful jockey, Richard Fourie was effusive in his praise for this multiple Grade 1 winning daughter of Captain Al – now victorious in nine of 11 outings.

After getting Captain’s Ransom (16-10) up in the last stride to stave off the gallant 3yo Chansonette (4-1), Richard Fourie said his favourite filly had made it difficult.

“She wasn’t quite herself today. But it was nice to see the Guineas winner acquitting herself so well. What a team the Snaiths are. Congrats to Basie and Suzette Viljoen,” he added, confirming that he believed the first time 1800m wasn’t an issue and that she’d go further.

Captain’s Ransom, who had won the Diana Stakes for the second consecutive year in her season debut in October, was said to be only 90% by trainer Justin Snaith, who didn’t seem convinced that she had enjoyed the 1800m.

“There’s an engine inside there. It just purrs – it never overrevs. She is the easiest horse in my stable. Well done to Suzette and Basie – and to John Freeman, and my brother,” added a relieved SA Champion trainer.

Captain’s Ransom clocked 110,43 secs for the 1800m and beat Chansonette a nose. Aldo Domeyer launched Marina (9-2) down the centre and the big daughter of Silvano took off to be beaten only 0,30 lengths.

Adam Marcus’ Princess Calla (6-1) was not disgraced a head back in fourth, in one of the great finishes to the prestigious race this century.

Follow us on Social Media for Paddock Stakes updates!