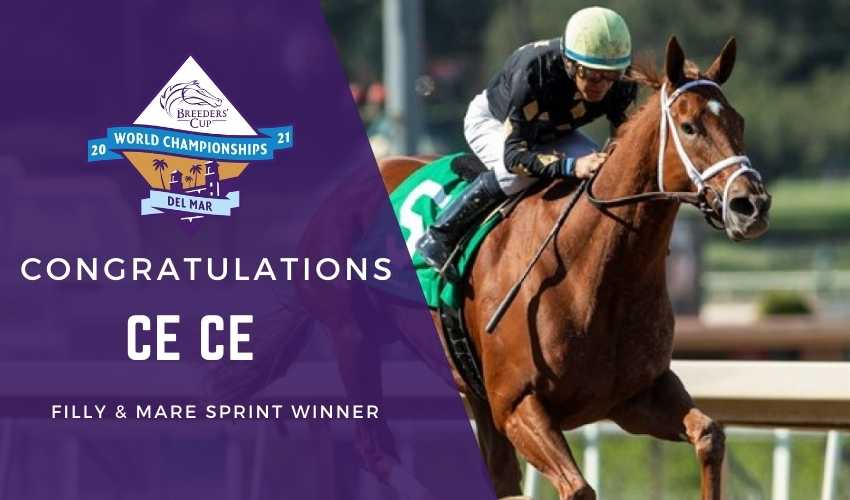 The second day of the Breeders’ Cup began with a huge surprise, when the heavy favourite Gamine was overcome with ease in the Filly & Mare Sprint. Last year’s winner was beaten fair and square by the Mike McCarthy-trained Ce Ce, who had finished third behind Gamine in the Grade 1 Ballerina at Saratoga in August.

It was another setback for trainer Bob Baffert, arguably the most prominent figure in US racing, whose Breeders’ Cup runners had come under the tightest scrutiny before being allowed to participate, following the laboriously ongoing investigation into the positive betamethasone test of his Kentucky Derby winner Medina Spirit.

It all looked straightforward for Gamine, the 3-5 favourite, as she led her four rivals through the first half-mile, but the Into Mischief filly was challenged from all sides as they exited the turn and the writing was soon on the wall. Ce Ce, who had come wide on the turn, found traction in mid-stretch under Victor Espinoza and surged away for a comfortable victory, drawing clear through mid-stretch to score by around three lengths.

Edgeway kept on to be runner-up ahead of Gamine, who was nowhere near the force of 12 months ago and duly became one of the shortest-priced beaten favourites in the history of the Breeders’ Cup. Ce Ce stopped the clock in 1:21 flat and paid off those bettors who had bravely taken on the favourite at $14.40. The victory gave Ce Ce, a daughter of Elusive Quality, a four-for-six record for 2021, and added to a stellar year for McCarthy, who saddled Rombauer to win the Preakness in the spring. Twelve months ago Ce Ce finished unplaced in the Distaff, but a switch back to sprinting has proved crucial to the mare’s