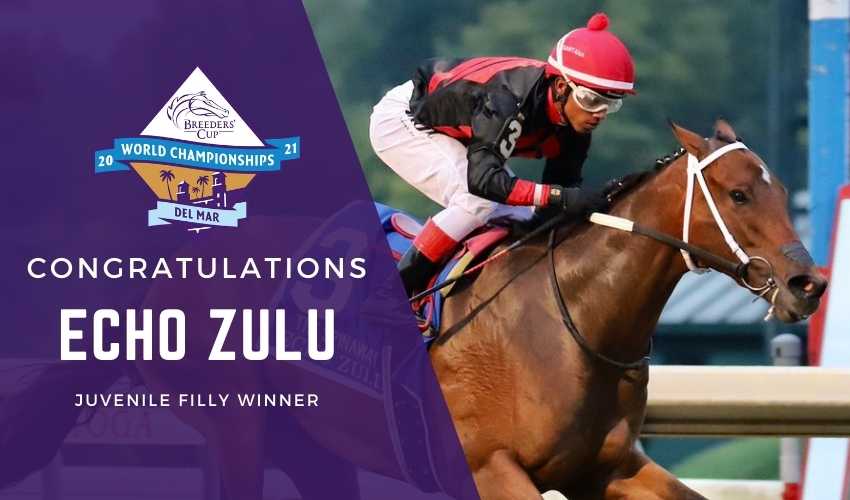 So easy for Echo Zulu

It may have been a short field for the Breeders Cup Juvenile Fillies but it was long on brilliance as the unbeaten Echo Zulu took her winning streak to four with a magnificent display of front-running.

She was expected to win, being sent away the 4-5 favourite against five rivals, but the way she did it brought the crowd to their feet – she was fast away under Joel Rosario and that was the ball-game. She set only steady fractions but was always in complete control, with Rosario able to ease the pace a little in the second quarter while still maintaining his advantage.

The game Tarabi stayed within reach only until Echo Zulu began to stretch away around the turn, and then she simply ran them out of town, coasting home under a hand-ride by a margin of six lengths that could have been more had Rosario – winning his third Juvenile Fillies, a joint-record for the race – been keen to do so.

This was Echo Zulu’s third Grade 1 success after previous victories in the Spinaway at Saratoga and the Frizette at Belmont Park, and she will now be a unanimous choice for an Eclipse Award as champion two-year-old filly. She covered the mile-sixteenth in 1:42 and one-fifth, while Juju’s Map stole the runner-up spot from Tarabi in the last few jumps, but forget the window dressing, this was all about one horse – Echo Zulu.

Trainer Steve Asmussen was winning his second Juvenile Fillies, having won the race ten years ago with My Miss Aurelia, and there will have been great satisfaction in the camp given that Echo Zulu is a daughter of freshman sire sensation Gun Runner, who Asmussen trained to win the Classic when the world championships were held at Del Mar in 2017.

Sign up and get a 10% rebate. Make sure to stay tuned for the latest Horse racing odds, racing entries and Races results.