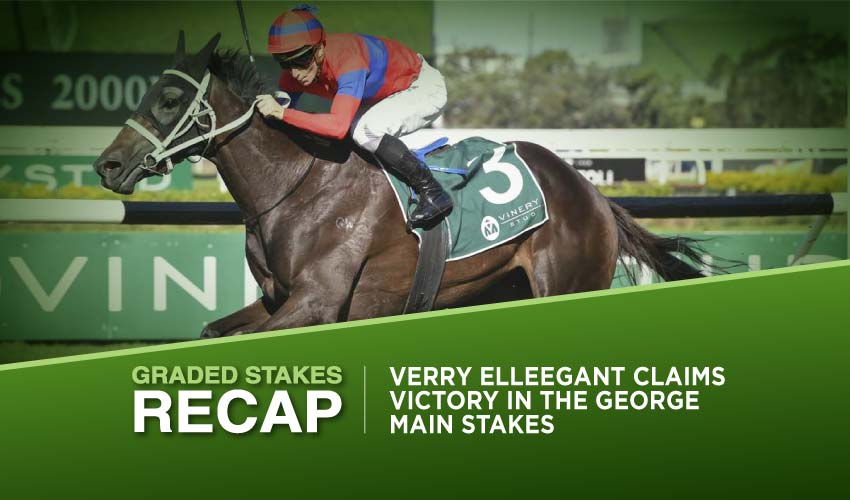 George Main S over a mile at the Randwick course happened to be the event where mare Veerry Elleegant achieved the 9th G1 victory of her glorious career. She managed to run down Riodini in a thriller finish in which also Sir Rupert Clarke Stakes culminated. In this case, the favourites were disappointing as Sierra Sue landed this G1 handicap sprint at the Caufield track. A couple of top Australian races were held on Saturday.

The ninth G1 win wasn’t the easiest for wonder mare Veerry Elleegant (3-4), but the mile-long race with the purse of A$1,000,000 saw the triumph of the favourite in the end. The six-year-old bay trained by Chris Waller began the event open for three-year-old and up in the midfield, and on turf, James McDonald gradually navigated her through the rivals until she was pretty close to leading Riodini (12-1). Similarly, as last time out, Riodini was trying to snatch the win by drawing clear from other participants in the final stretch, but like in August, he was outrun by one better horse – Veerry Elleegant. The brave brown mare managed to sneak past the barrier in the last furlong, achieving her ninth G1 victory by ¾ of a length in 1m 36.07s. As we pointed out in the Preview, Riodini should’ve been capable of putting out an eye-catching performance once more, which he did and claimed second place in front of Think It Over (19-5), who beat him in their last clash. In the final stretch, Think It Over looked very solid, closing on to the leader, but he got tired in the end, and managed  only the third position. Hungry Heart (20-1) was too far to make a considerable impact and finished fourth.

In this G1 turf handicap race over 7 furlongs, none of the favourites had a say in the fight for the win. Finishing behind prominent contestants, Probabeel (4-1), Beau Rossa (13-2), and Behemoth (13-2) still earned some minor parts from the purse of A$1,000,000, yet they simply weren’t good enough to catch Sierra Sue (10-1) on that day. Among the field of three-year-old and older sprinters, Sierra Sue, trained by Trent Busuttin & Natalie Young, had a good start, travelled smoothly on the outside, and in the final turn, Daniel Moor was already urging her to quicken up, which she did. The five-year-old mare has won just two G2 races so far, but when she was rolling down the final stretch, nobody basically could match her power she grabbed the win with. At the last moment, she stuck her head forward and succeeded in this prestigious race in 1m 23.07s; sentencing underestimated Dice Roll (20-1) to second place. Both mentioned horses belonged with the least carrying participants together with the third I’m Thunderstruck (16-5), who not only made the cut, but seized the role of a favourite right away. Also the fourth place finisher Aydar (60-1) carried low weight unlike, for example, Probabeel or Behemoth.