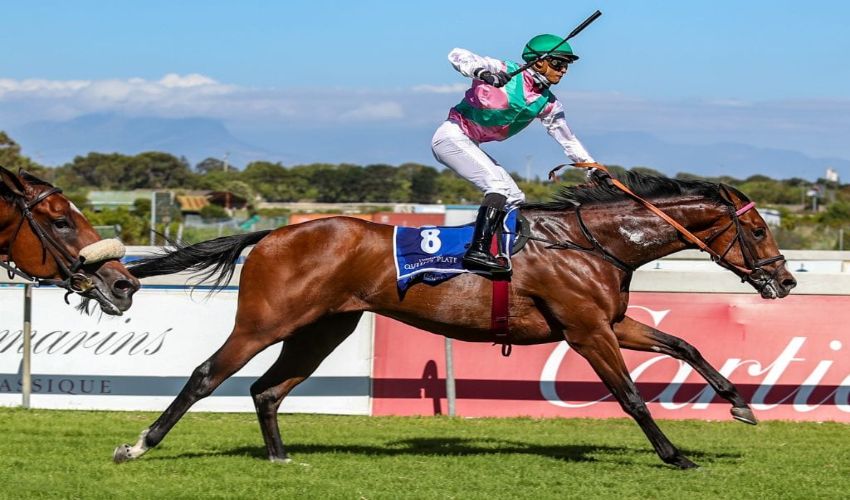 Jet Dark split horses in the final two furlongs and prevailed by three-quarters of a length over Rainbow Bridge in Saturday’s 160th L’Ormarins Queen’s Plate (G1) at Kenilworth Racecourse.

Jet Dark, a bay son of Florida-bred Trippi out of Night Jet by Jet Master, is trained by Justin Snaith; who also saddled the 5-4 favored third-place finisher Belgarion and fourth-place finisher Do It Again, who won the Queen’s Plate in 2019.

How was the race?

Held before no spectators because of COVID-19 restrictions at Kenilworth, a field of eight starters in the Queen’s Plate broke cleanly with Hurricane Harry setting the early pace. Jet Dark, off at 6.5-1, stayed in mid-pack just off the rail through the first half-mile.

After turning into the home stretch, 6-1 Cirillo edged closer to Hurricane Harry; while to their outside Rainbow Bridge and Belgarion were starting to hit their best stride.

Then in a burst of speed inside the two-furlong marker, Van Niekerk sent Jet Dark between the fading Hurricane Harry and Cirillo and into the lead. Rainbow Bridge made a final surge, but could not catch Jet Dark at the wire.

In picking up his fourth win in seven starts, and his first Group 1 triumph; Jet Dark completed the 1-mile in 1:38.38. He came into the race after a fourth-place finish in the 1-mile Cape Racing Presents the Cape Guineas (G1) at Kenilworth on Dec. 12. Prior to that, he won the one-mile tabonline.co.za Mr 80 Handicap at Kenilworth on Nov. 28. His first Group stakes score was in the Beaumont Stud Langerman (G3) last July, also at Kenilworth.

Follow us on Social Media for more Horse Racing News!