Pizza Bianca from last to win the BC Juvenile Fillies Turf 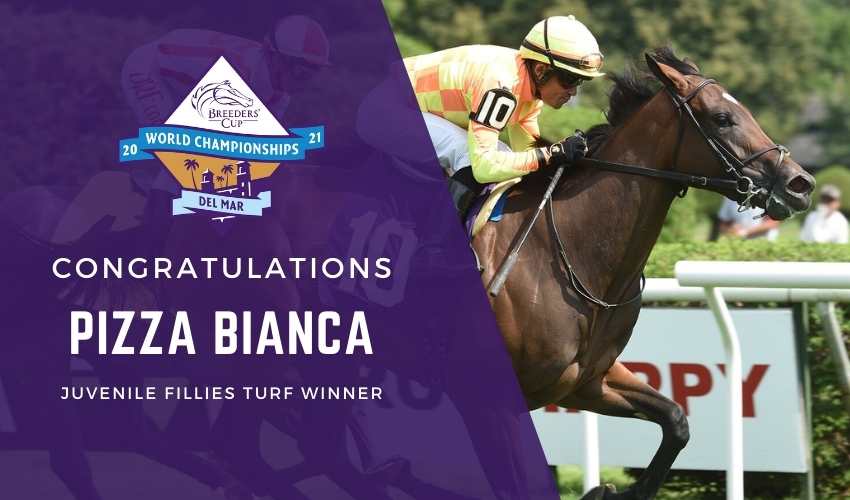 It must have been well worth the wait. Trainer Christophe Clement finally got his name against a Breeders’ Cup winner, after a long, frustrating run of more than 40 beaten horses at the world championships, when Pizza Bianca came with a miraculous stretch run to win the Juvenile Fillies Turf.

On the turn, Pizza Bianca had no hope, looking like a 99-1 shot rather than the 9-1 chance she was. She was last of the 14 runners, and jockey Jose Ortiz had to take up when space got tight. Up front they had gone very fast, with the British raider Cachet breaking like a bullet and finding herself unexpectedly on the lead, with Turnerloose and Mise En Scene at her heels for the first half-mile.

When heads were turned for home Cachet still held the call, but gaps began to appear in behind. Ortiz threw Pizza Bianca into one of them and the filly responded, cutting through the pack like one of owner Bobby Flay’s hot knives through butter and grabbing the lead inside the last sixteenth. She had half a length to spare at the wire, stopping the clock in a tick over 1:36, with the French-trained Malavath runner-up and Haughty third. The game Cachet held on to finish fourth.

“I can’t believe it,” said celebrity chef Flay, who also bred the daughter of Fastnet Rock. “That’s the best thing about horse racing, these are the moments you live for. The Breeders’ Cup? It’s a dream to win here.”

On her previous outing Pizza Bianca had finished runner-up in the Grade 1 Natalma at Woodbine, and the Juvenile Fillies Turf was her first stakes success. Her trainer Christophe Clement has won many, many stakes races, but now he can call himself a Breeders’ Cup winner at long last.

Follow us on Social Media for instant Pizza Bianca updates!