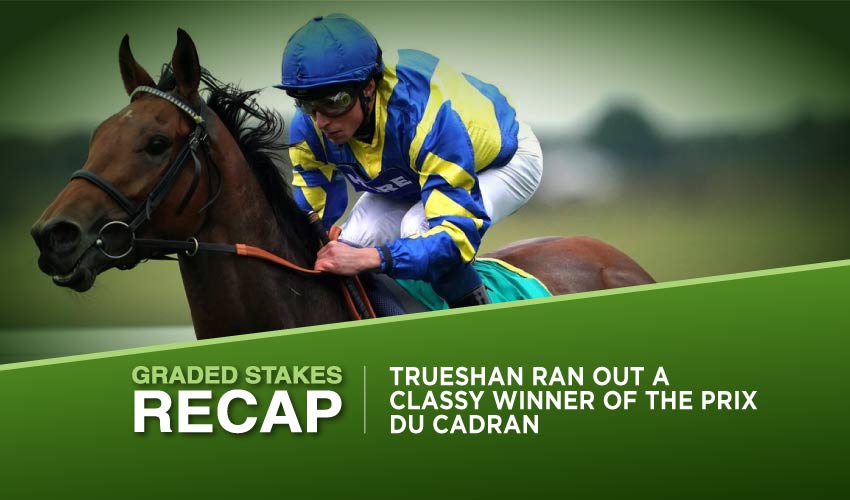 One of the most prestigious flat meetings in Europe of the horse racing season is behind us, which means it’s the right time for a recapitulation. In this article, we focus on a Saturday’s highlights, in other words, on the Prix du Cadran for super-stayers and Prix Royallieu for fillies and mares. Also we look at two races from Sunday’s card – Prix Marcel Boussac for two-year-old fillies over a mile and Prix de l’Abbaye for sprinters who competed at the distance of 5 furlongs.

One of the pinnacles of Saturday’s card saw another impressive performance of star-stayer Trushan (8-5), who proved he can handle the distance of 2 miles and 4 furlongs. The G1 turf event with the purse of €300,000 was open to three-year-old and older horses, but in the end, the Prix du Cardan turned into a clash between three favourites, including Trueshan. The Alan King bound five-year-old spent the race in the midpack, travelling smoothly under James Doyle, and once the field turned for home, Trueshan commenced his decisive move forward. Charging to the front, the bay gelding soon enough left all of his rivals behind and galloped to the wire with ease, bagging his second G1 victory in a row. Trueshan crossed the wire in 4m 28.10s, having an advantage of 4 and half a length over second Stradivarius (3-1), who was basically no match for the winner. Still, despite the fact he’s a seven-year-old horse who dislikes the very soft ground that happened to be found at Longchamp, he showed a respectable effort on the one hand. On the other one, voices calling upon the retirement of the former staying superstar are growing louder.

The third chance of the race was Princess Zoe (26-5), a grey mare who won the Prix du Cadran last year, but she wasn’t met with as heavy ground as in 2021, so she managed only fifth place behind a duo of interesting local stayers – third filly Bubble Smart (16-1) and fourth Skazino (15-2).

A slight surprise was to be seen among three-year-old and older fillies and mares in this turf G1 over a mile and six furlongs as the very soft ground should’ve suited anybody else but Loving Dream (78-10). Despite the aforementioned, she managed to bag the victory after a thrilling finish for the purse of €300,000. The three-year-old bay trained by Thady and John Gosden won the Ribblesdale Stakes at the Royal Ascot, but last time out finished down the field together with the fillies she beat at Ascot. Thus, it could’ve been said the quality of the Ribblesdale Stakes field wasn’t great; however, Loving Dream denied the statements by putting on an eye-catching performance at Longchamp. Showing the way from the start, Frankie Dettori aboard let the Gleneagles filly gallop the way she wanted until her rivals pressed her in the final stretch. At that point, it seemed Loving Dream had nothing else to give and Believe In Love (13-1) was about to strike gold, while preferred Valia (6-5) was finishing from the outside, but Loving Dream found some more left in the tank. The gutsy filly then charged for the front again and enthusiastically regained the lead by a short neck, crossing the wire in 3m 9.67s. The Alain de Royer-Dupre favourite Valia was no challenge for the first duo of British fillies, finishing in third as Joie de Soir (37-10) faded in the final strides to the fourth place. Aidan O’Brien’s Passion (16-1) was fifth at Prix Royallieu.

Only two-year-old fillies could compete for the purse of €400,000 in this G1 turf race held on Sunday, while the distance of one mile suited best Zellie (39-10) trained by Andre Fabre. After her stable-mate Raclette was withdrawn, Zellie still wasn’t the biggest chance for her trainer as Fleur d’Iris (11-5) became the favourite of the event, leading not only the betting offer but also the whole race. Last time out, she left Zellie behind, but she just tired herself out by her front-running now, and once the fillies were in the final stretch, Fleur d’Iris dropped to the one but last place. Zellie delivered a victory to Andre Fabre anyway as Oisin Murphy let her gallop at the rear of the field, and as soon as he spotted a gap at the barrier, he aimed the Wootton Bassett bay there. She then rallied towards the finish line, handling even Cristian Demuro’s manoeuvre when pressing his mount Time Square (33-1) into her, trying to discourage her. Although Zellia finished behind Fleur d’Iris and Oscula (74-10) in her last two starts, she just progressed impressively to land her first G1 victory in 1m 42.67s. Time Square, finishing from the outside, was second by a length and ¾ with Oscula running in third. Irish raider Agartha (49-10), a G2 winner at Curragh, tracked the leader since the beginning and couldn’t quicken up anymore when asked, so she had to settle for fourth place.

The field of two-year-old and older sprinters gathered in this G1 event that was held at the distance of 5 furlongs. Tjhe very soft turf surface hindered the chances of the favourites, even though consistent Glass Slippers (56-10) once again managed to run a great race after placing second in 2019 and winning the race in 2020. With €350,000 being up for grabs, 14 participants embarked on a journey for a prestigious victory, while Air de Valse (48-1) and Winter Power (11-1) were showing the way. The latter is the winner of the Nunthorpe Stakes but failed to deliver last time out because she was too keen, which she repeated on Sunday, finishing well tired in 10th. The pace wasn’t too fast, though, as Air de Valse was drawing clear of her rivals in the final stage, going for unexpected success, but it was also the time when A Case Of You (108-10) made a move. Ronan Whelan aboard led the three-year-old colt at the barrier and had to face some issues with the shortage of space; still, he was lucky enough to find support for his mount in time. Once A Case Of You had a clear path in front of him, he romped forward, chasing the leader and catching her by a short head. The Adrian McGuinness bound bay showed some potential throughout the season, still, he was also pretty disappointing in two runs, so his second place behind Romantic Proposal in the Flying Five Stakes wasn’t regarded with such respect it should have. A Case Of You won his first G1 in 58.02s, while Glass Slippers was the best of the preferred horses finishing third ahead of Mo Celita (23-1) and Suesa (5-2). Like Winter Power, Romantic Proposal failed to cope with the going and finished down the field.

Join us at JazzSports and make sure to stay tuned for the latest fixed horse betting odds. racing entries and horse racing results.