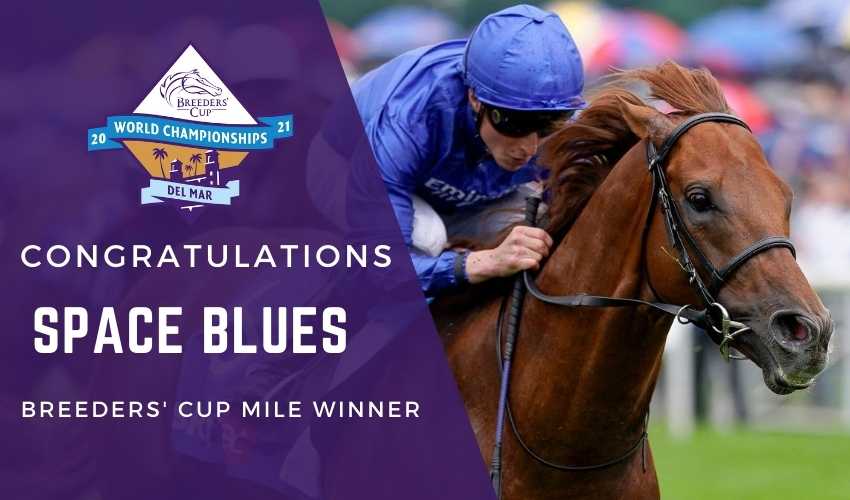 Today Space Blues gives Appleby another win in the Breeders’ Cup Mile, yesterday Albahr went down in the gate in the Juvenile Turf, but his stablemate Modern Games won the race for trainer Charlie Appleby and jockey William Buick. Twenty-four hours later . . . well, stop me if you’ve heard this one before.

Master Of The Seas lost his cool in the gate before the Mile, and was taken out and scratched from the race. Not to worry, because stablemate Space Blues went on and won the race for trainer Charlie Appleby and jockey William Buick, giving the European contingent their third victory in the race in the last four runnings.

Space Blues, the 2-1 favourite, was given a fine ride by Buick given that the five-year-old is a seven-furlong specialist. The steady fractions set by Smooth Like Strait meant that nothing was going to come from the back of the field, so Buick had Space Blues just off the pace, on the rail, biding his time.

That time came as they cleared the turn, and Space Blues showed all his seven-furlong pace to quicken clear of the field for a narrow but dominant success, stopping the clock in a tick over 1:34. Smooth Like Strait parlayed his tactics into the runner-up spot, while Ivar, who took a hefty bump from Got Stormy as he was making his challenge, and Raging Bull came late but not fast enough to do better than third and fourth.

“That was rather surreal, deja vu all over again,” said soon-to-retire US manager for Godolphin Jimmy Bell, invoking the spirit of baseball legend Yogi Berra. “That’s racing. It’s just testament to what Charlie [Appleby] does, overcomes any situation to win these big races all around the world.”

Space Blues, a son of Dubawi, was signing off in style before taking up stud duties next year. The Breeders’ Cup Mile was the third Grade 1 of his career, and his first victory over a mile since his lifetime debut.