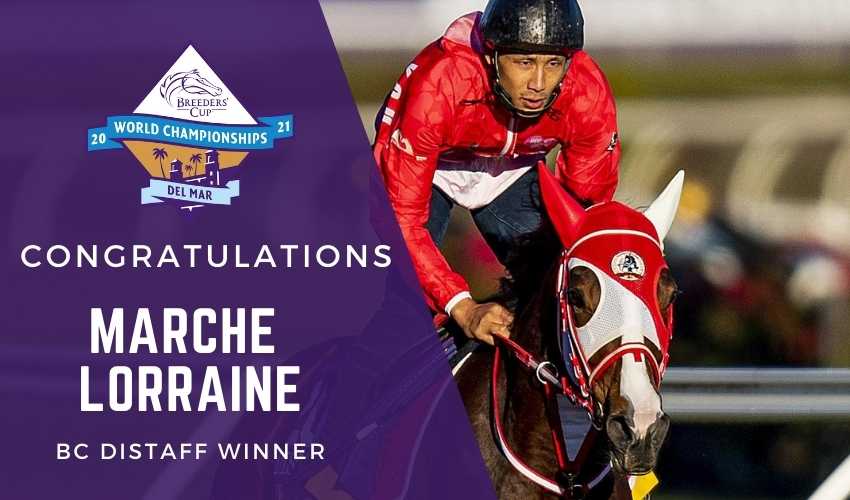 What a day for Japan, and – to be perfectly fair – what a day to relearn the old lesson that the gold cup doesn’t always go to the best horse. Marche Lorraine won the BC Distaff for Japan as a 45-1 boxcar longshot, as the favorite, Letruska ran the worst race of her life.

The story of the race was a pace so hot it would have set fire to all those torn-up betting tickets that blew around Del Mar in the aftermath. Flavien Prat, aboard Private Mission, set fractions faster than Life Is Good managed when winning the Dirt Mile, only a blink slower than Golden Pal when winning the Sprint, and who knows what was going through his head. A bugboy would have done a better job.

Letruska was right at her heels, and there was no way either horse was going to get home off that burn-up. Both horses stopped to a walk at the top of the lane, while up front the Japanese mare Marche Lorraine, ridden by British champion jockey Oisin Murphy, was busy making the best of her way home.

Dunbar Road delivered a sturdy challenge on the rail and for a moment in mid-stretch looked as though she was moving through to win her race, but Marche Lorraine was tough in the closing stages and the pair flashed past the line together, and after a while the camera proved that Marche Lorraine had prevailed by a short head, in a time of 1:47 and three-fifths. Three-year-old star Malathaat was third, with Clairiere fourth. Such was the excessive pace, the last five horses at the half-mile pole were the first five home.

The victory crowned an incredible day for trainer Yoshito Yahagi, who was completing a double after winning with the much better fancied Loves Only You in the Filly & Mare Turf. Marche Lorraine, who has been running at Japanese provincial tracks, had no business winning a race as grand as the BC Distaff. But – that’s racing – she did.

Follow us on Social Media for instant BC Distaff updates!