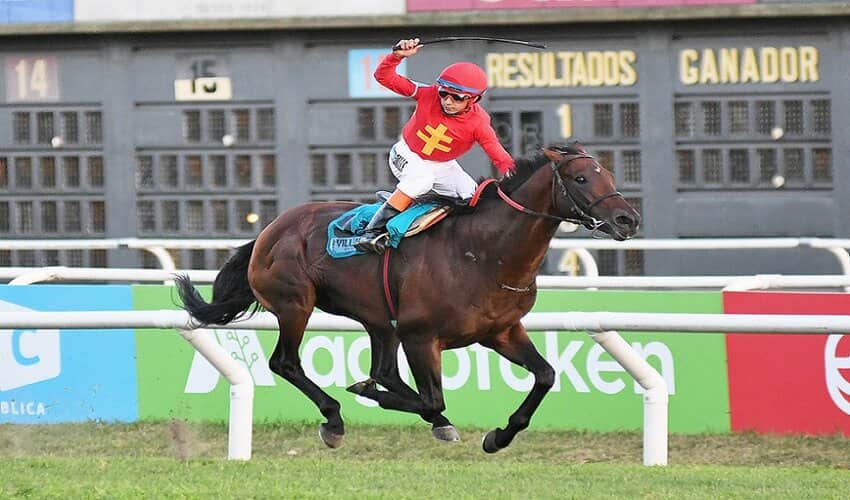 The Gran Premio Carlos Pellegrini Internacional, South America’s most prestigious race, was the first Breeders’ Cup Challenge Series race of the 2022 season and Village King did it in style.

Village King began his career in Argentina with five starts and was then sent to the U.S.  following a third-place finish in the 2017 Gran Premio Carlos Pellegrini. Under the care of trainer Todd Pletcher, Village King made eight starts, highlighted by a win in the  2018 Red Smith Stakes at Aqueduct. After an eighth-place finish in the Man o’ War Stakes (G1) at Belmont Park in May 2019, Village King was returned to Argentina and won his first race on more familiar ground, taking the 1 ½-mile Progreso (G2) at San Isidro.

Village King (ARG), trained by Carlos Etchechoury, finished third in the 2017 and 2020 editions of the Gran Premio Carlos Pellegrini. Today, the bay son of Campanologist out of the Pleasant Tap mare Villard, won his ninth race in 21 starts, and his fourth Group 1 triumph. He completed the 1 ½ miles in 2:23.42.

Sent off at the 9-1 third choice in the 19-horse field, Village King broke sharply and settled in behind the pace set by Sandino Ruler (ARG) and Encarrilado (ARG) through the first 1600 meters in 1:37.15. On the turn for home, Village King ranged up and easily passed a fading Encarrilado and set his sights on Sandino Ruler, catching the pacesetter in midstretch and extending his margin to nine lengths at the wire. Mirinaque (ARG), the 5-1 second choice, closed well to finish second, with Sandino Ruler holding on for third. Cool Day (ARG), the defending champion and 2-1 favorite, finished ninth.