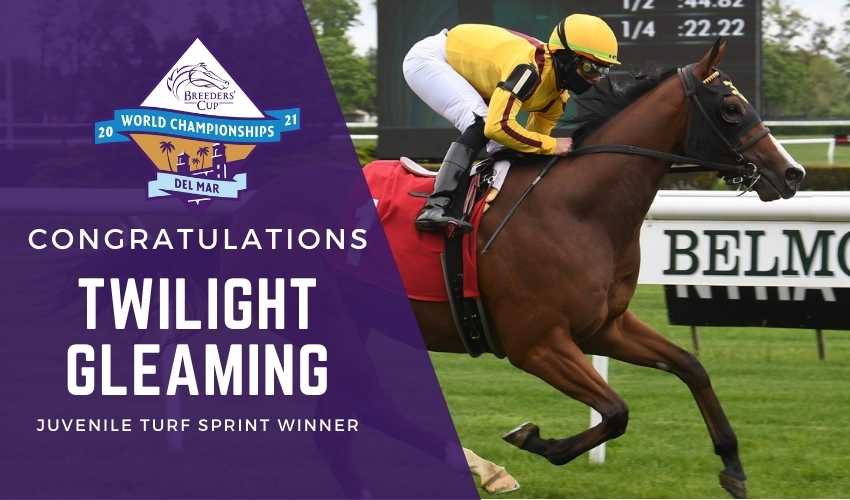 It was business as usual as the Breeders’ Cup got under way at Del Mar on Future Stars Friday, with trainer Wesley Ward and jockey Irad Ortiz responsible for the winner of the Juvenile Turf Sprint for the third year running with Twilight Gleaming.

Yet it wasn’t the favoured Averly Jane in the winner’s circle but her barnmate Twilight Gleaming, who was out of the gate like a rocket and led at every call. The daughter of National Defense set ferocious fractions under Ortiz, with One Timer only able to catch up to her after a furlong before staying at her shoulder all the way to the top of the lane.

That’s where Twilight Gleaming opened up a little daylight, and although the posse was closing fast she had enough in the tank to hold on to her lead by around a length from the British raider Go Bears Go, who came out the best in a blanket finish for the minor placings.

Kaufymaker finished off her race best of all to give Wesley Ward third place to go with his winner, while Averly Jane came home a close but never-dangerous fifth. Fillies filled four of the first five spots; Twilight Gleaming stopped the clock in 56 and two-fifths, and paid off at $12.40.

Twilight Gleaming is now three-for-five and has never finished worse than second. She visited Europe in the summer, like many of Ward’s fastest two-year-old sprinters, and was runner-up in the Group 2 Queen Mary at Royal Ascot before winning a stakes at Deauville in France in August. Her tickets have no doubt already been booked to make the return trip next year.

Sign up and get a 10% rebate. Make sure to stay tuned for the latest horse racing odds, Races results and racing entries.