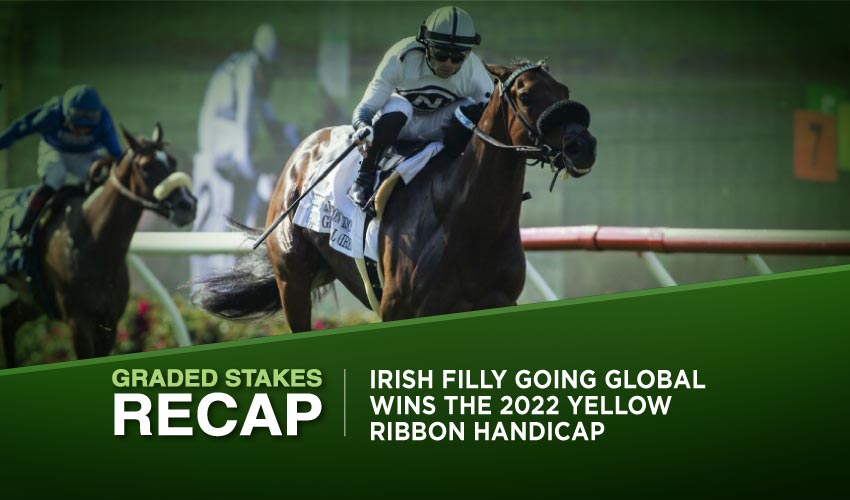 Two very promising juveniles kept their unbeaten records intact at Del Mar over the weekend, with Havnameltdown an impressive all-the-way winner of the G3 Best Pal and Vegas Magic causing an upset in the G2 Sorrento. Going Global is already an established star of the Californian circuit and continued her fine form when taking the 2022 Yellow Ribbon in style.

It was just as easy for Havnameltdown as the tote board suggested it would be, as the colt outran the opposition in style in the Best Pal, the main event at Del Mar on Sunday.

The clunkily-named 1-2 favorite had led throughout on his debut here and did the same again, keeping his unbeaten record intact when drawing off in the stretch to score by two and a half lengths, stopping the clock in 1:10 and one-fifth and providing trainer Bob Baffert with his ninth win in the race.

The third-choice Agency was clear second-best, five and three-quarter lengths ahead of Man Child.
“He was real aggressive out of the gate,” said jockey Juan Hernandez. “I just let him do his thing. I woke him up at the quarter-pole and he picked up really well.”

There was an upset in the Sorrento at Del Mar on Saturday when 14-1 chance Vegas Magic posted an impressive victory, stretching her unbeaten streak to three.

All the talk beforehand was about Procrastination, a romping winner on debut, and when the odds-on favorite led the field into the stretch it looked as though the chalk players had it right.

However, Vegas Magic was closing fast under a fierce drive from Abel Cedillo, and she ran down the leader in the last sixteenth to win by a length and a quarter. Dazzlingdominika was three and a half lengths away in third; the stopwatch showed 1:11 and two-fifths.

The next stop for Vegas Magic, who was the outsider of trainer Doug O’Neill’s three runners here, is likely to be the G1 Del Mar Debutante over seven furlongs on September 10.

Going Global continues to cut a swathe through the Californian distaff division, winning her eighth race from her last 11 starts with a thoroughly dominant performance in the Yellow Ribbon.

It was a straightforward day out for the filly, who sat off the pace set by longshot Javanica until moving smoothly through to take the lead around the turn.

As soon as the 3-5 favorite had clear air the race was over, Going Global clearing right away to beat the rallying Avenue De France by three lengths, with Javanica hanging on gamely to take the show spot, two lengths back. The time was 1:41 and one-fifth.

Trainer Phil D’Amato will now point Going Global, who is three-for-four at Del Mar, to the G2 John C Mabee back at the seaside circuit over a mile-eighth on September 10.