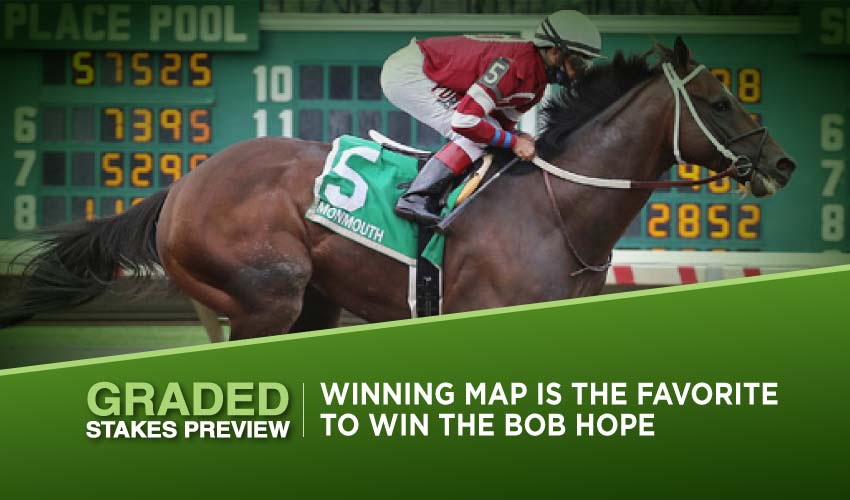 After the mouthwatering feast of Breeders’ Cup weekend, it’s back to the staple diet at Del Mar with two intriguing juvenile races forming the centerpiece of the action. Bob Baffert has a very strong hand in terms of quality and quantity in the Desi Arnaz on Saturday and the Bob Hope on Sunday, races he has won on many occasions over the years.

The highlight of Saturday’s card at Del Mar is the Desi Arnaz, won by Bob Baffert twice in the last three runnings and a record four times in all, with two earlier victories in the race’s existence as the Moccasin at Hollywood Park. With the overwhelming favourite and also the second-choice on the morning line in his camp, Baffert will be confident of improving those statistics.

His main chance is Eda (3-5), who took her record to two-for-four with a dominant success in a stakes at Santa Anita over six furlongs three weeks ago. She sat right behind the pace until going to the lead around the turn and quickly went clear, needing only to be pushed out to beat Lady T (7-2) by two and a quarter lengths.

That was only to be expected after her previous efforts in Graded company, notably when beaten by just a head here over six furlongs in the Grade 2 Sorrento in August, with the third horse more than 13 lengths adrift. She threw in a clunker next time in the Grade 1 Del Mar Debutante over seven furlongs, but the form of that race is suspect and in any case she has since shown her true self with that Santa Anita score.

That day’s runner-up Lady T is a two-race maiden, having preceded that effort behind Eda with a rallying nose defeat here over five and a half furlongs on her debut. She is certainly going in the right direction but has a way to go to catch up with Eda.

Baffert’s second-string is the maiden Under The Stars (5-2), who got going too late on her debut over six furlongs at Santa Anita but caught the eye when a rallying third, beaten less than a length. She’s a half-sister to Kentucky Derby runner-up Bodemeister and runs for the Coolmore partners, so has all the right credentials and can be expected to make considerable improvement.

Conversely, Tonito’s (8-1) got the job done first time at Santa Anita over six furlongs, staying on strongly to win by a length after being only tenth at the half-mile pole and fifth at the stretch call. The style of her success makes her one to consider carefully, but it was on turf and she now moves to the main track for the first time.

It took Endless Thirst (30-1) four tries to break her maiden, eventually scrambling home at boxcar odds in a state-bred affair at Los Alamitos over five and a half furlongs. Beaten a long way in an allowance optional claimer at Santa Anita next time, her odds of 30-1 in a five-runner field tell the whole story.

Eda is the best horse in the Desi Arnaz and the likely winner, but no-one gets rich wagering on 3-5 shots and a small bet on TONITO’S to show is a wiser suggestion.

Baffert also owns the record here with ten wins, six victories in the race’s previous incarnation as the Prevue Stakes at Hollywood Park and four in the last six years as the Bob Hope at Del Mar. With three of the five runners in Sunday’s renewal, Baffert holds all the aces again.

His two leading contenders are already towards the head of the Kentucky Derby future book after shaping with promise when winning their maidens. Messier (8-5) is one-for-two, with defeat at little Los Alamitos followed by a sharp effort at Santa Anita over six furlongs, when he went to the lead at halfway and drew right off to win by six and a half lengths. The opposition was moderate, but Messier looked ready to step up and Flavien Prat sticks with the Empire Maker colt.

Barnmate Winning Map (7-5) got the job done at the first time of asking at Santa Anita over six furlongs, leading at every call and keeping on strongly through the stretch to win by four and a quarter lengths. Again, it was no more than an ordinary maiden, but it was the performance of a colt who is ready to move up and the presence of ‘Big Money’ Mike Smith in the saddle indicates high regard for the son of Liam’s Map.

There are no Road to the Kentucky Derby points available here, but victory for either Messier or Winning Map would set those Churchill Downs bells ringing. Baffert’s third-string on previous performance and jockey bookings – his trusty lieutenant Abel Cedillo is in the plate – is the Quality Road colt Kamui (5-2), who is one-for-two after a messy debut here over five and a half furlongs.

He chased the gate-to-wire winner Forbidden Kingdom (9-2) all the way and was beaten only a half-length, but was moved down from second to third for causing interference in the last sixteenth. Three weeks later he made amends when clearing away to win by six in a Los Alamitos maiden over five and a half furlongs.

Next time out Forbidden Kingdom switched to turf and was beaten around three lengths by the very speedy One Timer in a stakes at Santa Anita over the flying five, proving that he has a touch of class but not whether he’s ready to stretch out against these strong maiden winners, although the return to dirt may move him along.

The most experienced of the five runners is Rock N Rye (15-1), who is two-for-five including a state-breds stakes win here over five and a half furlongs. Last time out he was a rallying runner-up in a Los Alamitos stakes for state-breds at the same distance, but these are deeper waters and he must find more.

The answer to the Bob Hope is usually found with Bob Baffert, and of his trio it’s MESSIER who makes the most appeal following his wide-margin win at Santa Anita.