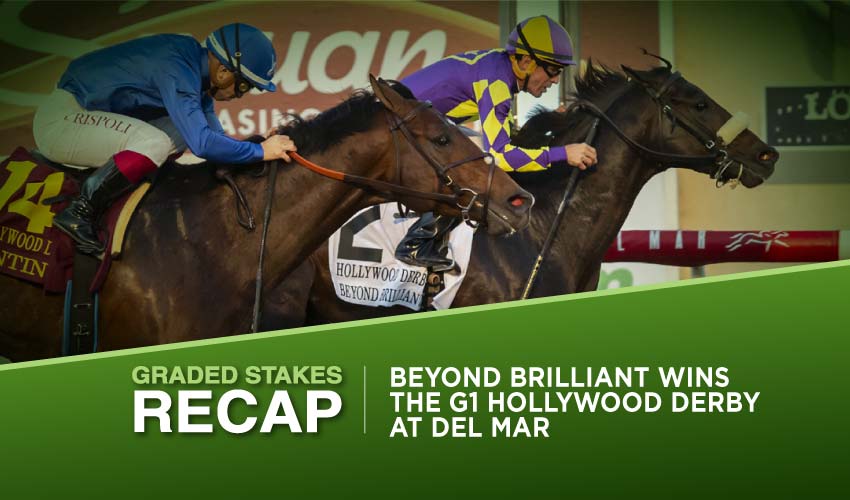 This wasn’t a lucky day for the favourites at the Del Mar Racecourse as in all three Saturday Grade races of a single card; they were quite narrowly beaten. At first, Sacred Life didn’t deliver in the Seabiscuit Handicap as he was bettered by Field Pass by just a head, upon which Helens Well had to settle for close fourth place in the Jimmy Durante Stakes. Winning Tezzaray was just too good on that day. Subsequently, preferred Public Sector showed a turn of foot, yet he couldn’t hold a candle to Beyond Brilliant in the G1 Hollywood Derby.

Seven three-year-old and older horses clashed in the G2 turf handicap, where the participants covered the distance of a mile and a half of a furlong.

With the purse of $250,000, the race attracted the first two finishers from the G3 Knickerbocker Stakes, and its winner, Scared Life (9-10), was sort of expected to strike even Saturday’s race. The six-year-old charge of Chad Brown carried slightly more weight than back then second Field Pass (7-2), which could’ve played its role in the Seabiscuit Handicap as Field Pass managed to hold on to the victory ahead of Sacred Life.

Neither of them rushed anywhere from the start, yet it was Umberto Rispoli who urged Field Pass to improve his position before the final turn and charged for the lead. In the final stretch, Field Pass trained by Michael Maker was already in the first place, but the favourite was bracing for the finish, fighting for the space, which he managed to get for himself in the end, and Sacred Life was closing on the leader with each stride.

However, it wasn’t enough in the end as Sacred Life came up short by a head and Field Pass scored the victory in 1m 41.85s, bagging his very first G2 win. Indian Peak (28-1), finishing from the outside, took a close third place.

Although the G2 race is a handicap, in the end, the more carrying horses proved to be really the best ones in the field as all three mentioned horses carried more than any of their rivals who finished behind them, including fourth Majestic Eagle (24-1) and fifth Flop Shot (31-10).

In the field of 11 two-year-old fillies, Tezzaray (31-10) trained by Peter Miller scored the G3 turf race at the distance of a mile after having a fine gallop under Irad Ortiz jr. Winning maiden at the third attempt, Tezzaray belonged among the leading chances in this race with the purse of $100,000, and after she broke away alright, she settled at the fence in fourth place. In the home turn, she closed on the leading filly; however, she remained second behind Awake At Midnyte (78-10).

The quite big two-year-old filly charged for the lead in the final stretch, was pursued only by Tezzaray, and she put on a great fight, which was in vain nevertheless. Tezzaray’s finish was timed perfectly by the jockey, resulting in a tight victory by a nose in 1m 37.56s, with Awake At Midnyte having to settle for second place. Outsider Toeris (46-1) ran well from the outside to grab third.

The only Listed winner in the race, Liam’s Dove (181-10), set the pace and remained at the front until the final stretch where she weakened and faltered to the fifth place, still, she delivered only slightly worse result than Helens Well (21-10). The favourite failed to impress in the Breeders’ Cup Juvenile Turf; however, she was expected to fire better in this competition, which she did; still, her performance was a bit disappointing.

Fourteen three-year-old colts and geldings lined up for the G1 Hollywood Derby, offering the purse of $400,000 and ran on the turf surface. They were about to cover the distance of a mile and a furlong and among the promising participants, Beyond Brilliant (109-10) was simply brilliant for jockey Kent Desormeaux and trainer John Shirreffs.

The son of Twirling Candy has looked interesting for some time, but after finishing third in the G2 Twilight Derby, it seemed he was about to face rivals too formidable for him once more, yet Beyond Brilliant didn’t let anybody in front of him on Saturday.

He broke away smoothly from the gates and immediately charged for the lead, where he set a comfortable pace, managed to hold on to the first place also in the home turn, upon which he tried to draw clear of all the participants.

Of course, his opponents attempted getting closer to him, but Beyond Brilliant just kept giving, and in the end, he actually maintained his lead until he crossed the wire in 1m 48.84s. Bagging his first Grade win, Beyond Brilliant scored the G1 Hollywood Derby by a neck to Santin (177-10), finishing from the midpack to snatch the second place despite still looking extraordinarily green and immature.

Some great things might come from him, though, as he bettered even experienced and consistent Cathkin Peak (71-10), running in third. Preferred Public Sector (19-10) trained by Chad Brown had a good trip at the fence, but it took too long for him to switch for the outside and rally properly. Therefore, after four victories, he had to settle for fourth place in front of Subconscious (4-1). The winner of the Twilight Derby pursued the front closely and basically had nothing to offer in the end, staying on in the same place to grab fifth.

Sign up and get a 10% rebate. Make sure to stay tuned for the latest Horse Racing Odds, racing entries and races results.