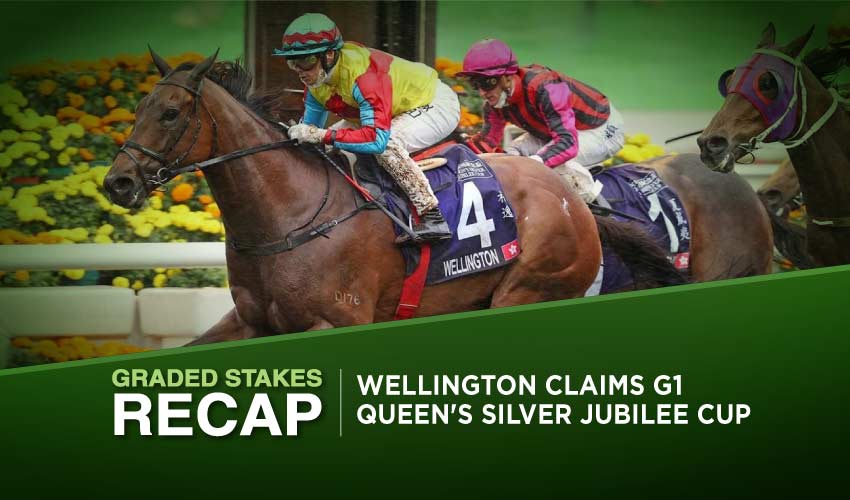 Some high-class races were run at the Hong Kong track Sha Tin on Sunday, while both G1 events welcomed their previous winners. Still, neither Waikuku nor Golden Sixty managed to retain their crowns as, among sprinters, Wellington finally boasted his class, after which Golden Sixty’s finish wasn’t enough to catch impressive Russian Emperor. Here is our Queen’s Silver Jubilee & Hong Kong Gold Cup Recap.

The G1 turf race with the purse of HK$12,000,000 attracted a very classy field of eight four-year-old and older horses, covering the distance of seven furlongs. Although there was the G1 winner of the Hong Kong Sprint, Sky Field (13-5), and preferred veteran Waikuku (6-4), trying to add another big victory after bagging the G1 Centenary Sprint Cup, the win in this prestigious race belonged to the unlucky Wellington (57-10).

The five-year-old gelding ran into difficulties during his previous outings and was unable to show off his full potential as he’s always been known to be an excellent sprinter, yet he just needed to be a bit fortunate to shine. And he definitely did shine with Alexis Badel aboard when galloping at the rear of the field to swing by all of his rivals in the final stretch, crossing the wire in 1m 23.53s.

The Richard Gibson bound bay finally delivered a performance his team could be proud of as Wellington bettered finishing Ka Ying Star (13-1) by ¾ of a length. Mentioned Waikuku took third place after Sky Field kept him in the pocket throughout the final stretch, so the favourite had to wait until the very end to get even a slim chance to play an impactful role here.

In the end, it almost looked like the jockey of Sky Field was more focused on keeping Waikuku closed at the fence than on the performance of his mount as Sky Field didn’t seem focused on the race at all, finishing fourth, just a nose before front-running Californiadeepshot (23-5).

With the purse of HK$12,000,000 being up for grabs, the G1 turf race welcomed ten four-year-old and older horses who clashed over the distance of a mile and a quarter.

Golden Sixty (2-5) was a clear favourite of the race while trying to become a back-to-back winner; moreover, when attempting to return to the winning ways however, he just couldn’t draw on his previous successes on Sunday because of the brilliant ride on Russian Emperor (11-2) deliver by Black Shinn.

The Douglas Whyte bound five-year-old bay showed he could belong among the elite in the previous months and crowned his endeavours on Sunday with an impressive four and ¼ of a length victory. Initially, the gelding galloped at the rear of the field together with Golden Sixty. Still, as the favourite opted for a finish on the outside, Black Shinn successfully manoeuvred his mount throughout his rivals and as soon as Russian Emperor had enough space to rally, nothing could’ve stopped him.

The son of Galileo surged forward and unopposed, scored his premiere G1 win in 2m 4.11s in front of outsider Savvy Nine (56-1). Golden Sixty had to settle for third as he wasted some energy on circling the field very wide, by which he didn’t improve his position at all, and even though he tried, he was too distant from the front to threaten the subsequent victor.

Tourbillon Diamond (18-1) took fourth place, and More Than Ready (66-10) ran quite below par when finishing fifth.