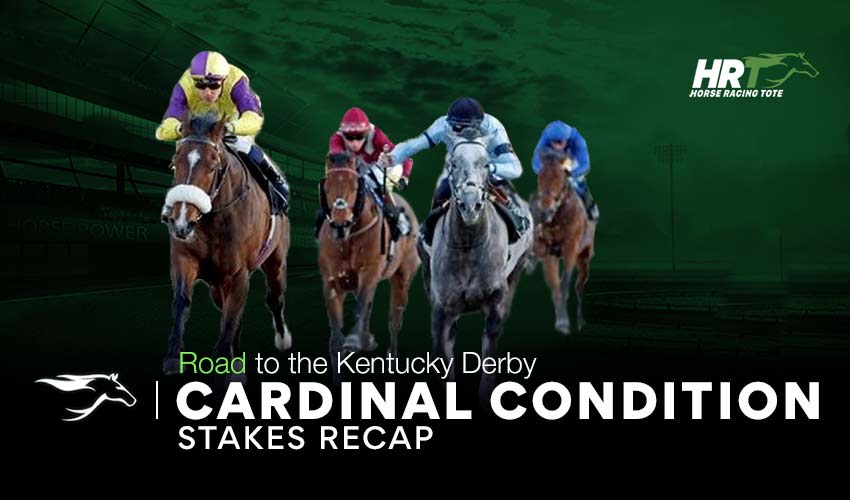 The £100,000 2022 Cardinal Condition Stakes being run at Chemsford on the artificial surface is part of the European Road To The Kentucky Derby series and attracted a strong field of six – including Blue Trail, Harrow and Find, who were virtually inseparable in a similar event at Kempton earlier in the month.

Despite those highly regarded horses in the race, it was Dark Moon Rising who stamped himself as a top prospect for the year ahead with a victory in the 2022 Cardinal Condition Stakes run as the feature race at the Essex track.

Six three-year-old colts attempted to earn some points toward the European Road to the Kentucky Derby, but just one prevailed and earned the 30 points the race offered, runner up was Harrow and Find was third, Kevin Ryan trained the 6/1 winner and Kevin Stott rode, the colt made an impression in his first start on all-weather surface.

The Cardinal Condition will end up having no impact on the Kentucky Derby presented by Woodford Reserve as none of the six horses have been nominated to the U.S Triple Crown and none of the horses’ earning points in any of the seven races in the series is under consideration for a trip to Churchill Downs.

Mr Professor (8/1) led throughout but at the 2f post started to weaken as Find (7/2) took the lead with Atheby(80/1)near by but both weakened late.  Harrow (2/1) surged to the lead but that was short lived as Bad Moon Rising, sent away at 6/1, came surging late in the middle of the track under Kevin Stott to take the victory and galloped out easily once past the wire.  He looks like a horse that can go farther as the races lengthen and we head toward summer.

Coming in off an absence of 173 days, trainer Kevin Ryan had the three year old Irish bred ready to roll.  Charlie Appleby trainee Blue Trail (9/4) seemed to be part of the battle early but then raced evenly and tired at the end and made on headway on the winner.

Stott said of the winner, who runs in the colours of Pete and Angie Bailey: “He did everything right and jumped well.  He travelled smoothly, picked up when I asked him to and he hit the line good. He’s very exciting.”