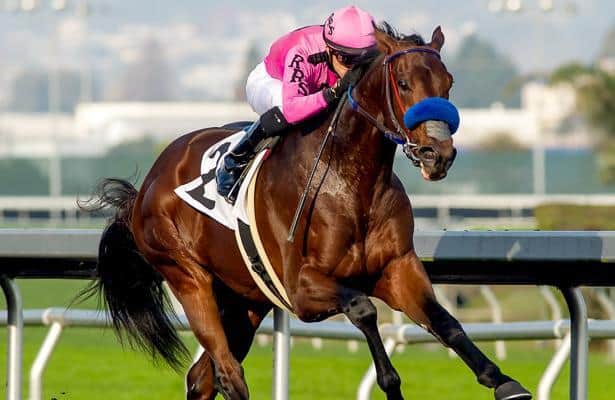 The next qualifying derby race on the Road to the Kentucky Derby is set to run on Saturday. The $100,000 El Camino Real Derby at Golden Gate Fields; which awards Derby qualifying points on a 10-4-2-1 scale; is a 1 1/8-mile event that also awards a free berth into the May 15 Preakness Stakes (G1) at Pimlico Race Course.

The race is set as Race 8 on the race card and will include a field of nine runners.

The field is being led by John Fradkin and Diane Fradkin’s Rombauer. The 3-year-old Twirling Candy colt; currently sits in the 18th spot on the Road to the Derby leaderboard with four points.

Trained by Michael McCarthy, his purse earnings total $150,500. The runner has one win and one second from four lifetime starts.

He has not raced since Nov. 6, when he finished fifth in the TVG Breeders’ Cup Juvenile presented by Thoroughbred Aftercare Alliance (G1) at Keeneland. The colt scored those four Derby qualifying points in the Sept. 26 American Pharoah Stakes (G2) at Santa Anita; where he finished right behind Get Her Number and ahead of Spielberg; who holds the 5th spot on the leaderboard with 13 points.

If Rombauer wants to win the El Camino; he will have to overcome the outside post 9 under jockey Kyle Frey.

Waspirant and Play Chicken to Challenge

Waspirant is a 3-year-old Union Rags colt trained by John Shirreffs. He is still looking for his first on-the-board finish of this year, as the runner took fourth in the Jan. 2 Sham Stakes (G3) at Santa Anita. He also finished fourth in the Sept. 26 American Pharoah won by Rombauer to close out his 2020 campaign.

The Doug O’Neill-trained Play Chicken is a 3-year-old Square Eddie Colt. He is also looking for his first on-the-board finish of 2021.

The runner’s most recent performance was a disappointing seventh-place outing in the Jan. 16 California Cup Derby (Black Type) at Santa Anita. He closed out his 2020 season strong, winning the Dec. 20 King Glorious Stakes (Black Type) at Los Alamitos Thoroughbred.

Some of the other names to look out for include Godolphin’s Javanica; who is coming off a runner-up finish in the Dec. 31 Blue Norther Stakes at Santa Anita, and Perry Bass II and Ramona Bass’ Petruchio; a gelding from Into Mischief coming off a third-place run in the Dec. 19 Los Alamitos Futurity (G2).

Be sure to check Horse Racing Tote for all the latest racing news and odds; weekend graded stakes recap and results.