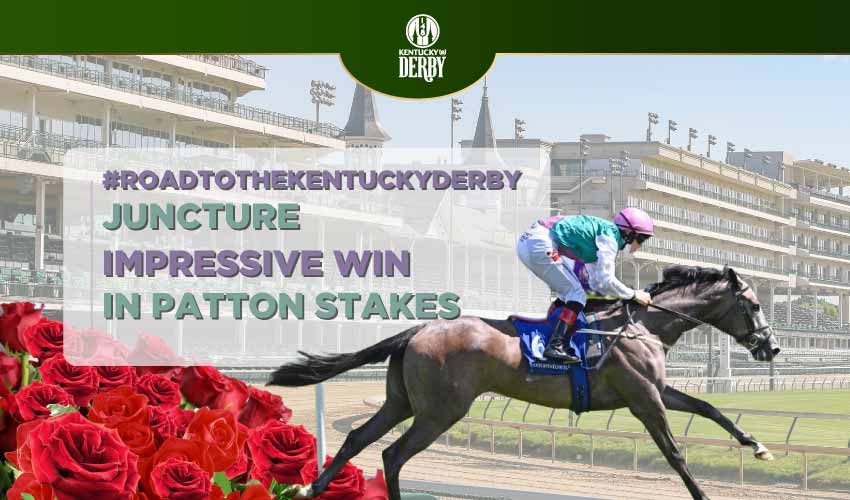 The European section of the ‘Road to the Kentucky Derby’ drew towards its conclusion last week without producing a legitimate contender for the ‘Roses’. The filly Juncture was very impressive at Dundalk on Friday but is staying at home for a Classic over a mile, while Blue Trail’s narrow victory at Kempton Park on Wednesday didn’t hint at a Derby challenge.

She is certainly worth her place at the top level, but Juncture won’t be using the ‘Road to the Kentucky Derby’ points she earned with a hugely impressive success in the Patton at Dundalk on Friday night.
The grey Dark Angel filly, a Juddmonte Farms homebred trained by Ger Lyons, will be aimed at either the 1,000 Guineas at Newmarket or the Irish 1,000 Guineas at the Curragh following her six-length rout of seven rivals, and it is now unlikely that there will be a European representative in the gate at Churchill Downs on Kentucky Derby day.

Juncture was taking class relief after finishing runner-up in a Group 2 back in July, and she made that class tell despite a long layoff. The 10-11 favourite was always travelling easily under Irish champion jockey Colin Keane and when she went to the lead a furlong out she quickly had the race in safe-keeping, drawing off under a hand-ride to stop the clock in 1:38 and one-half; longshot Morning Soldier stole second in the final strides by a neck from Sister Bridget.

The sole runner with a nomination to the Triple Crown was third-favorite Absolute Ruler, but he was beaten with more than a furlong to travel and finished sixth.
“She came in early and has been working well, we knew she was fit so we weren’t surprised she did that,” said Lyons’ brother and assistant Shane Lyons. “She has always been held in the highest esteem by us and will go for a Guineas trial now.”

Trail on an upward curve

Three horses crossed the line in near-lockstep in the ‘Road to the Kentucky Derby’ Conditions Stakes at Kempton Park on Wednesday evening, and although the contest was a thriller it didn’t unearth a contender for America’s greatest race.

The picture changed dramatically in the closing stages, as Find had looked home for the money when three lengths clear passing the furlong pole, but he began to tie up and was swamped in the last stride by the race-fit 5-4 favourite Blue Trail and the second-favourite Harrow, who had both been well off the pace early on.

The photo-finish showed that the Charlie Appleby-trained Blue Trail was in the right place at the right time, doing just enough to win by a nose from Harrow with Find a head further back in third. The time for the mile was a slowish 1:39 and change.

“He missed the break so it was time for Plan B,” said winning jockey James Doyle. “He’ll stay further and I think he has a bit of quality.”

Take a look at our Horse racing odds, racing entries, and races results. Sign up to get our daily horse racing news and become a winner!