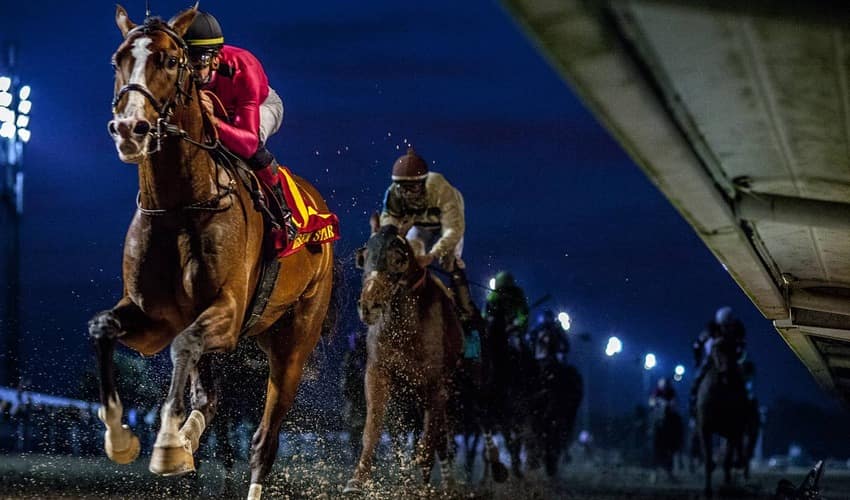 Louisiana Derby Preview: The highly-anticipated; $1 million Twinspires.com Louisiana Derby (G2) will run on March 20 as the premier race at Fair Grounds Race Course in New Orleans. The event is a Kentucky Derby “Win and You’re In” race; offering qualifying points on a 100-40-20-10 scale to the top four finishers.

This year’s race is highlighted by a rematch between Proxy and Mandaloun; two top runners that met in the February 13 Risen Star Stakes Presented by Lamarque Ford (G2); at Fair Grounds Race Course & Slots.

In the Risen Star; Mandaloun ran to victory with the addition of blinkers; and the runner-up Proxy will now wear them this time out, hoping to flip that 1-2 finish.

Replay of the Risen Star

Proxy is a homebred by Tapit owned by Godolphin; and he will look to improve on his last performance going into this one. In the Risen Star; he was not able to keep pace with Mandaloun; who advanced down the backstretch late and moved up in the second turn under Hall of Fame jockey John Velazquez.

With his second-place run, Proxy improved his career record to 2-3-0 from five starts with earnings of $187,700. It was his second runner-up performance of the year; with the first coming in the January 16 Lecomte Stakes (G3) also at Fair Grounds.

Proxy holds the tenth spot on the 2021 Road to the Kentucky Derby leaderboard with 24 total points.

He will break from post 4 under John Velazquez once again.

Six of the seven local runners in the Louisiana Derby also raced in the Risen Star; which Mandaloun won by 1 1/4 lengths.

The 3-year-old Into Mischief colt is owned by Juddmonte Farms and trained by Brad Cox.

Prior to his Risen Star victory; Mandaloun finished third behind Proxy in the Lecomte, so the two runners have been going back and forth. He has a career record of 3-0-1 from four starts and earnings of $351,252.

The colt was joined by Florent Geroux in the Risen Star; and the rider will have the call once again as they break from post 6.

Mandaloun holds the third spot on the Road to the Derby leaderboard with 52 points.

Trained by Hall of Famer Steve Asmussen, Midnight Bourbon finished third in the Risen Star behind Proxy and first in the Lecomte ahead of both Mandaloun and Proxy. He sits in the ninth spot on the Road to the Derby Leaderboard with 26 points.

Hot Rod Charlie is trained by Leandro Mora, and his last race was a third-place finish in the January 30 Robert B. Lewis Stakes (G3) at Santa Anita.

He holds the 20th spot on the leaderboard with 10 total points.

Make sure to check Horse Racing Tote for all about the Louisiana Derby preview, the latest horse news; updated racing odds, last minute results and so much more.