Road to the Kentucky Derby 2022 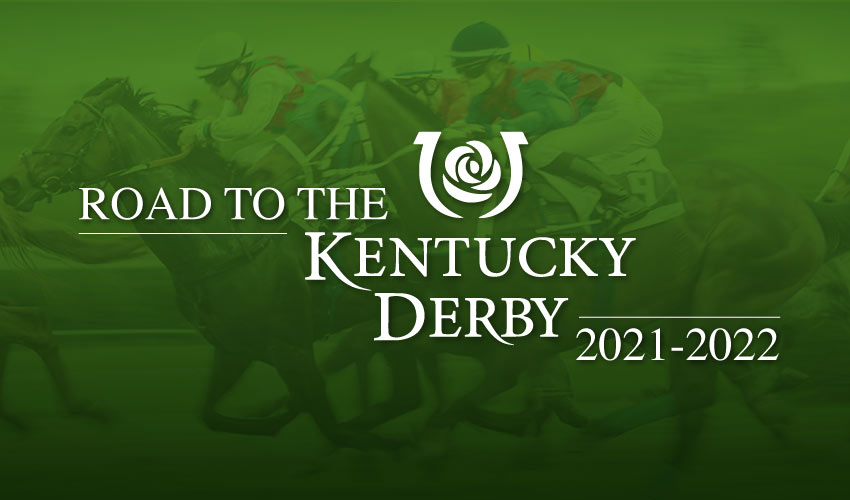 We are sorry, Event ended !

We look forward to the Kentucky Derby, the most famous, most prized, most glorious race in America. Only 20 horses can run at Churchill Downs on the first Saturday in May, so a process of eligibility is required to winnow the wheat from the chaff: this is the Road to the Kentucky Derby 2022.

Hope is always high on the Road

There is only one road that leads to the Kentucky Derby, and those who would ‘run for the Roses’ must first travel that road. It’s the only way to get there.

In 2013, the first ‘Road to the Kentucky Derby 2022’ series was established. Because there is only room for 20 horses to participate in the Derby, there has to be a process of elimination in order to arrive at the final field. This is done on a points-based basis, and the top 20 points-scorers become the runners in the big race. The same format applies for the Kentucky Oaks, with only minor discrepancies.

Points are awarded to the first four horses to finish in selected races across the US, as well as in a short series of races in Europe and Japan, the first of them taking place this weekend at Churchill Downs. The first step on the Road is the Iroquois Stakes, which gives ten points to the winner, four points to the runner-up, two to the third, and one to the fourth. Most of the races adopt this 10-4-2-1 scoring system, so that the Iroquois is equal in regard to the Springboard Mile at little Remington Park in December, or the Holy Bull Stakes at Gulfstream Park in February.

Bigger, better races supply bigger, better rewards. The Gotham Stakes at Aqueduct Racetrack in March apportions points on a 50-20-10-5 scale, as do several others, while the major trials for the Derby - the Florida Derby, the Wood Memorial, the Santa Anita Derby among them - are worth double at 100-40-20-10.

There are 48 races on the 2021-22 Road. Four of them take place in Japan, one in the UAE, and seven in Europe. There are no overseas qualifying races for the Kentucky Oaks. If that top-ranked horse in Japan or European series does not enter the Derby, as is usually the case, their places revert to US-trained horses. In a change made in 2020, horses who run on Lasix in qualifying races do not receive points since the Derby is a drug-free race.

As an example, this year’s Derby winner Medina Spirit amassed 74 points on his way to Churchill Downs, winning the Robert B Lewis (10 points) and finishing runner-up in the Sham (four points), San Felipe (20 points), and Santa Anita Derby (40 points). This ranked him tenth among Derby hopefuls, and eighth among those who eventually took part in the race.

Horses' level on points is then ranked by earnings, to arrive at the final list. As a rule of thumb, any horse picking up at least 50 points is virtually guaranteed a place in the final field, although this year Brooklyn Strong earned a place with just ten points, owing to the withdrawals of horses above him in the rankings.

It is a fair, open, and simple process, and one that provides plenty of excitement among fans and professionals alike as the big day at Churchill Downs approaches, and the last few places in the Derby field are confirmed.

The Road to the Kentucky Derby is open to all nominated three-year-old horses.  but this year's edition is not open to all trainers. Trainer Bob Baffert will not be able to enter a horse in the most prestigious race in the United States due to a ruling by race officials at Churchill Downs Inc up to mid-2023.

Baffert ban denies his route to the Derby

Bob Baffert has trained the winner of the Kentucky Derby a record seven times, but he won’t be making that eight in 2022. His horses are barred from entry at Churchill Downs, and his horses who run in ‘Road to the Derby’ races are not permitted to earn any points, so Baffert is banned on two fronts from the biggest race in the sport.

This situation arose following the victory of his Medina Spirit in this year’s Derby. Following the race, Medina Spirit tested positive for betamethasone, a corticosteroid medication that can be legally used, but is prohibited on race day in Kentucky.

Baffert maintained that Medina Spirit had been treated for dermatitis with an anti-fungal ointment that contained betamethasone, which is a legal practice, and that the amount found in the positive test was so negligible as to have made no possible difference to the horse’s performance at Churchill Downs, which is legally irrelevant, as the colt was found to have twice the permitted limit of betamethasone in his system.  Medina Spirit passed away on December 6th, 2021 after a workout and while no specific cause was found it has been called a heart attack by Baffert.

Medina Spirit has been disqualified and runner-up Mandaloun confirmed as the new winner for trainer Brad Cox.  Although the process is typically dragging through a legal minefield strewn with court judgments, statements from attorneys, and appeals.  One thing is certain, though: Churchill Downs has suspended Baffert from entering horses at the Louisville track through the 2023 spring meet.

Churchill Downs Inc., which oversees the Road to the Kentucky Derby 2021-2022, has also ruled that no horses running for a trainer suspended from the 2022 Derby will be able to earn qualifying points for the race. This also applies to the Road to the Kentucky Oaks which is the race for three-year-old fillies that takes place the Friday before the Derby and is also known as lillies for the fillies.  This has resulted in the top three-year-olds from Baffert's barn being moved to other trainers with Tim Yakteen taking over the training for Derby favorites Messier and Taiba.  Yakteen is also the trainer of record for Adare Manor who is a highly regarded entry into the Kentucky Oaks.

Baffert has a history of drug violations in his career with top horses. The Medina Spirit case was his fifth medication violation in little more than a year and it made 30 during his 44-year career, most of them involving legal medication that failed to clear a horse’s system by race day and most resulting in fines or short suspensions. Recently, his 2020 Kentucky Oaks third Gamine was disqualified after testing positive for betamethasone, while the filly had previously been disqualified after testing positive for lidocaine, a legally used local anesthetic that must be out of a horse’s system 72 hours before a race, after winning at Oaklawn Park. Her stablemate Charlatan, a winner at Oaklawn on the same day, also tested positive for lidocaine and was also disqualified.

Baffert has trained two Triple Crown winners, American Pharoah and Justify - although even Justify tested positive for scopolamine, an incident later blamed on feed contamination, after winning the Santa Anita Derby. Yet he is in danger of becoming as well known for medication violations as he is for his big-race success.  The Medina Spirit case is by no means legally over, and the Churchill Downs rulings may still be overturned but the scandal will still overshadow the sport.

Make sure to stay tuned for the latest Kentucky Derby Odds. Check out the World's major Racetracks entries and don't forget to Sign-up and get up to a 10% horse rebate. We have the biggest rebate!

Follow us on Social Media for Road to the Kentucky Derby 2023 Updates!