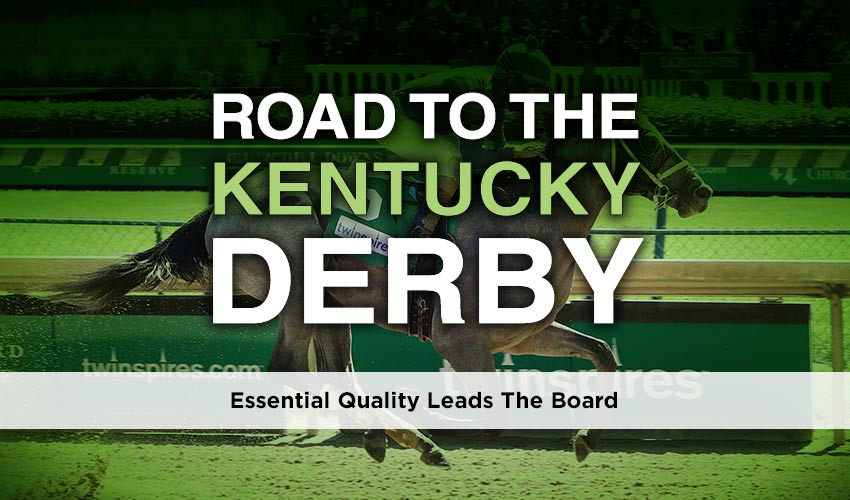 The Road to the Kentucky Derby is getting nearer by the day, as the first of the Triple Crown races take place on May 1st. It has been an eventful seven days or so in the market for the big race, but there is now a clear favorite that heads the betting following the Arkansas Derby last weekend.

Here, we will go through some of the favorites for the race and assess whether they have a good chance of winning the Kentucky Derby.

Essential Quality is now the outright favorite to win the Kentucky Derby this year, and in truth, it is hard to pick holes in his form. Trainer Brad Cox has done an excellent job of getting this three-year-old ready for the big race, and it looks hard to argue that this will be the first Godolphin-owned winner of the Grade 1. After success in the Breeders’ Cup last year, he has returned to the track with two straight wins.

The first of those was a dominant four and a half-length success against Spielberg in the Grade 3 Southwest Stakes, before he claimed another victory last time out in the Grade 2 Toyota Blue Grass Stakes. That most recent success was a nail-biter, as he finished just a neck clear of Highly Motivated, but it’s hard to argue against the three-year-old, as he has the strong credentials.

It could be argued that Rock Your World is the horse that has gone under the radar in the lead-up to the Kentucky Derby this year. He will likely start the Grade 1 as the second favorite in the betting, as he has won three from three. All victories have come for the John Sadler-trained horse this season, which means that he will be looking to join a select field that have won the Kentucky Derby without running as a two-year-old.

It may be slightly easier to pick holes in Rock Your World’s form, as all three successes that he has achieved have come at Santa Anita, which means there will be questions raised about how he will take to the surface at Churchill Downs. However, one aspect that can’t be ignored is the fact that he is a Grade 1 winner, as he recently won the Runhappy Santa Anita Derby. On that occasion, he finished four and a half lengths clear of Medina Spirit, who is also among the contenders for the Kentucky Derby.

Many expected Concert Tour to be the big market mover over the past weekend, as a victory in the Arkansas Derby would have taken him to at least joint-favorite in the betting. However, a disappointing third at Oaklawn Park means that questions are now being asked. The three-year-old faded quickly in that recent run and was even beaten to second by Caddo River on the line.

Bob Baffert’s reputation of training Kentucky Derby winners means that you can’t rule out Concert Tour, but the trainer has admitted that a final decision hasn’t been made yet. Before that disappointing run in the Arkansas Derby, he was unbeaten in three career starts. It’s hard to completely rule out Concert Tour, but the recent run does raise more questions without giving any answers. The winner of that race, Super Stock, has been the biggest market mover over the past seven days.

Make sure to check Horse Racing Tote for all the latest horse news on the Road to the Kentucky Derby; Horse Racing Recaps, graded stakes, updated odds courtesy of Jazz Sports, last-minute results and so much more.

Follow us on Social Media for instant updates on The Road to the 2021 Kentucky Derby favorites.