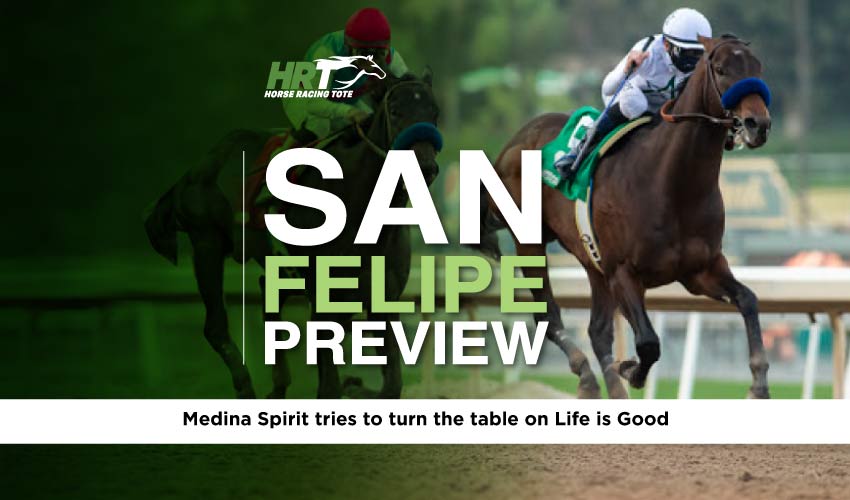 This weekend is set to watch three Kentucky Derby prep races, including the San Felipe Stakes Preview (G2) at Santa Anita. The event will offer Derby qualifying points on a 50-20-10-5 scale to the top four finishers, and it is a major stepping stone for the Santa Anita Derby (G1) on April 3.

Let’s take a look at some of the big names coming into the San Felipe Stakes Preview:

Life Is Good and Medina Spirit

The San Felipe Sakes Preview will likely be highlighted by a matchup between Bob Baffert’s Life Is Good and Medina Spirit.

Both of the runners have been working well leading up to the race.

Life Is Good is a 3-year-old Into Mischief colt owned by WinStar Farm and CHC INC. He is a perfect two-for-two in his career with total purse earnings of $94,200. The Sham Stakes victory, where he registered a 110 Speed Figure, was his only start of this campaign so far.

Mike Smith will return as Life Is Good’s rider in the San Felipe Stakes Preview.

Owned by Zedan Racing Stable, Medina Spirit is a 3-year-old Protonico colt. He has a career record of 2-1-0, and he has more experience this year compared to Life Is Good. In his runner-up effort in the Sham Stakes, he registered a 109 Speed Figure.

Jockey John Velazquez will be Medina Spirit jockey for the first time. Velazquez rode Authentic in his victory in the Kentucky Derby to receive Horse of the Year honors.

Roman Centurian and The Great One

Another one of the probable runners is Don Alberto Stable and Qatar Racing Limited’s Roman Centurian. He is a 3-year-old Empire Maker colt trained by Simon Callaghan.

Roman Centurian is 1-1-0 from three lifetime starts with earnings of $60,020. He has one win and one second this year.

He will be joined by rider Juan Hernandez.

Another leading probable is The Great One, owned by ERJ Racing, Train Wreck Al Racing Stables, Niall Brennan, Tom Fritz, and William Strauss. He is a 3-year-old Nyquist colt trained by Doug O’Neill.

He has one victory in 2021, which was a January 23 maiden special weight race at Santa Anita. His career record includes one win and one second from five lifetime races and earnings of $83,940.

Abel Cedillo will have the call for The Great One.

The rest of the probable contenders at San Felipe Stakes Preview include: Dream Shake, Parnelli, The Chosen Vron, Governor’s Party, and Hozier.

Make sure to check  Horse Racing Tote for all the latest news on the Kentucky Derby Prep Races and racing odds; weekend graded stakes recap and results.