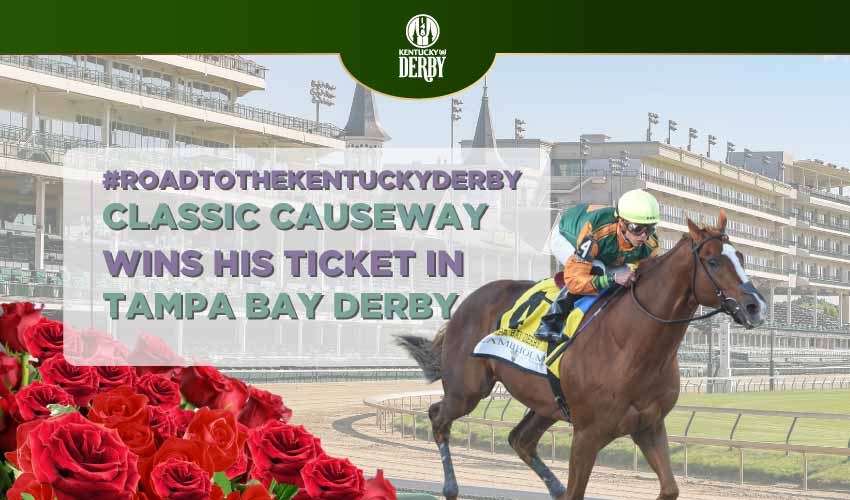 Classic Causeway lit up the biggest day of the year at Tampa Bay Downs and stamped his ticket to the Kentucky Derby. Read more about the G2 Tampa Bay Derby Recap from last Saturday.

Grade 2, $400,000, 1m 1/2f, 3yo
He went straight to the front in the Tampa Bay Derby and straight to the top of the Kentucky Derby points standings. Classic Causeway stayed ahead in the feature at Tampa Bay Downs on Saturday, and although he may not stay ahead on points the 66 he has already earned are more than enough for a place in the gate at Churchill Downs in May.

The story of the race is a simple one – Classic Causeway broke smartly and was soon on the lead, and in those circumstances, he is a hard horse to stop. He wasn’t put under pressure out in front, the 4-5 favorite posting steady fractions as Grantham, Giant Game, and Shipsational stacked upon his heels, and when Irad Ortiz asked him for more at the top of the lane there was plenty left.

The son of Giant’s Causeway went clear to win by two and a half lengths, stopping the clock in 1:44 and four-fifths. It was close for the minors, longshot Grantham holding off Shipsational by a neck with the same margin back to Golden Glider in fourth. The second-favourite Major General was a major flop, finishing last of the ten runners.

“He was looking around a little bit, but I felt I had a lot more horse,” said Ortiz. “He’s acting like he can carry his speed more. I don’t want to jinx it, but I think there is something more there.”
Classic Causeway will need to carry his speed further, but this victory – on the back of his score here in the G3 Sam F Davis – gives him cast-iron credentials for the Kentucky Derby and pays a compliment to Smile Happy, who beat him by three and a quarter lengths in the G2 Kentucky Jockey Club at Churchill Downs in November.

Trainer Brian Lynch, who has never had a runner in the Kentucky Derby, offered no immediate reaction on whether his colt will run in another prep or train up to the first leg of the Triple Crown.

Bleecker Street firmly on the map

Grade 2, $225,000, 1m 1f turf, 4yo+ fillies/mares
Chad Brown is famous for his battalion of turf stars and he has another potential top-notcher in Bleecker Street, who is now unbeaten in five following her dominant victory as 2-1 favorite in the Hillsborough.

The grey daughter of Quality Road hasn’t met a horse who can beat her yet, and it might be some time before she does judge on the way she easily rolled clear through the stretch to win by three and three-quarter lengths, covering the nine furlongs in 1:48 and one-fifth. Her barn mate Rocky Sky held off long-time leader Gladys – a sister of the great Rachel Alexandra – to take the second spot by three-quarters of a length.

“She’s an amazing horse. She’s the best filly I’ve ever ridden,” said delighted jockey Hector Diaz. “She can overcome any type of situation. When you ask her, she’s going to respond. That’s what separates the good horses from the great horses. The sky is the limit for her.”

Brown contends that Bleecker Street – winner of the G3 Endeavour here on her previous start – will be suited by stretching out a little further. He and owner Peter Brant had teamed up half an hour earlier with $1 million three-year-old Gina Romantica, who made a winning debut in a six-furlong maiden.

Grade 3, $200,000, 1m 1/2f turf, 3yo fillies
An hour later Brown was signing for another exacta, as French import, Dolce Zel got it the right first time in the US when running down barn mate Spicer to win the Florida Oaks.

Dolce Zel was coming off a five-month layoff after winning a maiden at Longchamp but showed no sign of rustiness, the 3-1 second-choice traveling easily a little way off the fractions set by longshot Princess Elin and favorite Spicer. The latter kicked on from the home turn, but Dolce Zel soon joined issue and grabbed the lead in the closing stages to win by a head, stopping the clock in 1:44 and one-fifth. On Alert rallied strongly from the back of the field to take third place, a length and a half further back; the well-fancied Ambitieuse was last of the nine runners.

“I had a perfect trip, in a beautiful position,” said jockey Irad Ortiz. “When she hit the lead she kind of waiting for the other horses, so I went for my whip and she responded very well. She looks like a nice filly, she did everything right.”

Scalding too hot to handle

Grade 3, $100,000, 1m 1/2f, 4yo+
There were a couple of horses with G1 form in the Challenger but they were upstaged by a horse having his first run in stakes company, as Scalding took his unbeaten streak to three with a game success.

Javier Castellano kept the 5-1 chance away from the pace set by Wolfie’s Dynaghost until moving closer around the turn and then drove his mount to the lead only to be immediately challenged on the outside by the favorite Cody’s Wish. They were head and head for half a furlong until Scalding asserted in the closing stages, going on to win by a neck in a time of 1:43 and one-half. Dynamic One, making his first start for six and a half months, never figured until keeping on late for third, two, and a quarter length away.

“We’ve always liked him,” said winning trainer Shug McGaughey. “His previous race at this track probably helped him and from what we saw there, he definitely has a big future.”