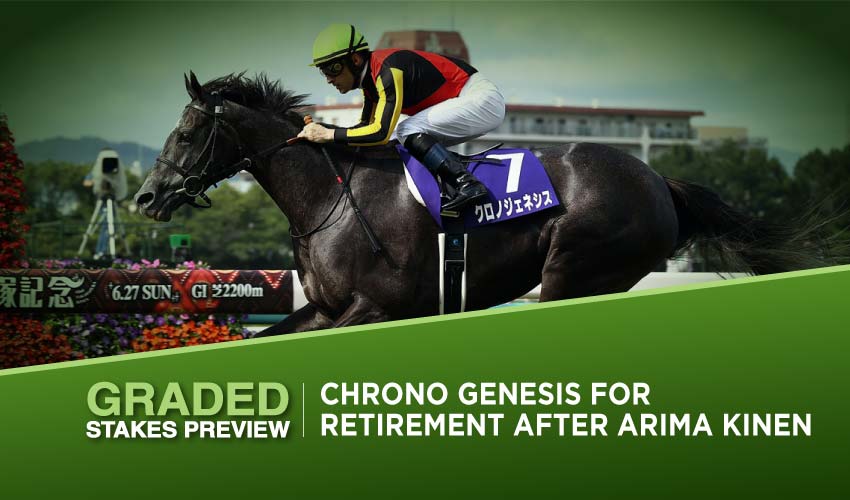 On Sunday, one of the most prestigious races in Japan will take place at the Nakayama Racecourse as 16 horses are about to line up for the G1 2021 Arima Kinen. The popular event is slightly different from others not only in Japan as together with Takarazuka Kinen in June; the Arima Kinen participants are chosen by the public. Of course, trainers make the entry; however, it’s up to the fans to vote for horses they want to see.

In this G1 turf race held at the distance of a mile and four and a half of a furlong, 570,000,000 Yen is up for grabs. It’s open for three-year-old and older horses, while five-year-old Chrono Genesis is about to become a back-to-back winner. The Takashi Saito bound mare has bagged four G1 victories so far, including two Takarazuka Kinen and last year’s Arima Kinen, cementing her position as one of the best horses running in Japan at the moment.

Sunday’s distance suits her, she’s a gutsy mare, and with Christophe Lemaire aboard, she’s the leading chance; still, it’s necessary to remember she showed up in the Prix de l’Arc de Triomphe in October. Given the muddy track, she finished seventh, which was the maximum Chrono Genesis could’ve reached here, and she definitely dug deep in France.

Although she received some rest to recover from both the race and the trip to Europe, it’s possible it took too much from her, and she could be vulnerable in Sunday’s race, especially when the opposition is quite strong here. However, before we get to three-year-old challengers, we should mention Deep Bond who also travelled to France to snatch a G2 victory before failing to impress in the Arc, and four-year-old Akai Ito, who shocked the crowds last time out when bagging the G1 Queen Elizabeth II Cup despite being a huge outsider.

In terms of three-year-old colts, there are two Classic winners in the field to tackle another big win among the serious competition. At first, Efforia trained by Yuichi Shikato was the G1 2000 Guineas, upon which was second in the Japanese Derby. The team decided against running in the St. Leger, so Efforia showed up in the G1 Tenno Sho, where he demonstrated his abilities once again, winning there in front of Contrail.

Titleholder then scored the G1 Shuka Sho, the Japanese St Leger, when employing front-running tactics. It’s undebatable both of the colts are classy; however, it seems the distance should suit Titleholder a bit more. The last to mention is Stella Veloce, who earned some money in all three legs of the Japanese Triple Crown, and could also place in the 2021 Arima Kinen.

Our betting pick for the Arima Kinen is:

Chrono Genesis despite the fact that she might be tired after the long trip from Europe; however, the younger participants still need to prove they’re classy enough to compete with Chrono Genesis, with the exception of Efforia. The colt looks able to match her ability, yet the distance might play against him.

Make sure to stay tuned for the latest Horse Racing odds, racing entries and Races Results. Sign up and get a 10% rebate.

Follow us on Social Media for instant 2021 Arima Kinen updates!