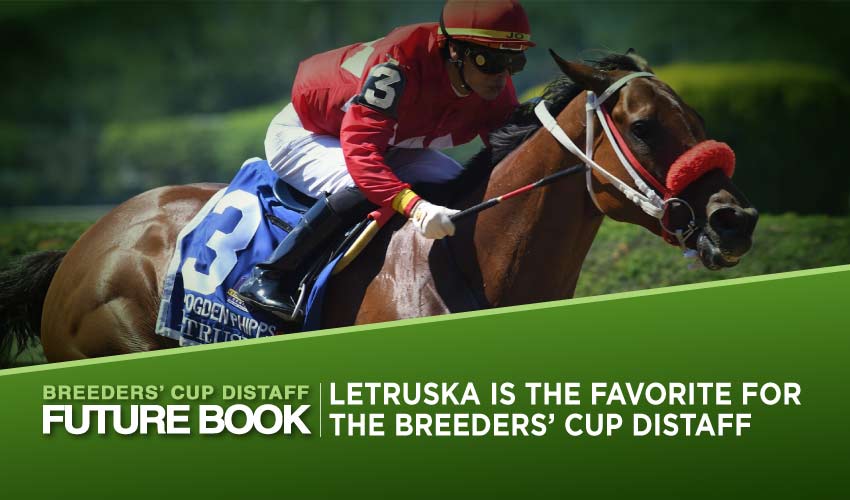 The Breeders’ Cup Distaff, one of the original seven races at the inaugural world championships in 1984, regularly defines the leading filly or mare of the campaign and this year may also have an influence on the destiny of the Horse of the Year award. Here is our 2021 Breeders’ Cup Distaff Odds & Entries.

Can she do it again? Few of the 14 races at this year’s Breeders’ Cup revolve so tightly around the fortunes of one horse as the Distaff. That’s not to say it’s a one-horse race, far from it, but the outcome depends largely on what Letruska will do, rather than what her opponents will do.

The marvellous Letruska has been one of the stars of the season, racking up a six-for-seven record, embellishing her 17-for-22 lifetime stats, cutting a wide swathe through the stakes schedule with four Grade 1 victories. Her weapon is a powerful one: pace. When Letruska is on the lead, she appears to be impossible to beat.

She led at every call in the Ogden Phipps, in the Personal Ensign, and last time out in the Spinster at Keeneland over a mile-eighth, never loose on the lead but in control, and then she simply turned up the heat from the turn and nothing could stay with her. Her only defeat of the year came when she couldn’t lead, and those looking for a loophole say she’s due a flat performance, but her consistency is her armour and if she can lead as usual – and there are other pace factors ready to take her on – then defeat would be a shock.

The undisputed leader of the younger generation is Malathaat , who has a similarly impressive six-for-seven lifetime record and a fistful of Grade 1s – the Ashland, the Kentucky Oaks and last time out the Alabama at Saratoga, in which she was able to save her speed for the stretch run and won comfortably.

Her only defeat came when getting caught up in a speed duel in the CCA Oaks at the Spa – and even then she only lost by a head – and she’ll be well away from the pace here, set to come late and strong in a bid to provide trainer Todd Pletcher with his third Distaff success.

The main pace rival for Letruska is the improving Private Mission who will need to be out fast from her inside post. Unbeaten in three starts in 2021, including the Grade 3 Torrey Pines here over a mile, she punched her ticket for the big league in the Grade 2 Zenyatta at Santa Anita over a mile-sixteenth when pressing the pace, taking it up at halfway and powering home for an impressive score.

Private Mission does not yet have the credentials to win here, but with only five starts to her name she has plenty of improvement in store and will certainly dictate the shape of the race. If she’s not on the lead, Letruska will be.

Consistency to the fore

The only horse to beat Letruska this year is Shedaresthedevil, who claimed that rare scalp in the Grade 2 Azeri at Oaklawn Park in March. Since then she has won three times, including the Grade 1 La Troienne at Churchill Downs and the Grade 1 Clement Hirsch over a mile-sixteenth here in August.

She’s another who likes to go forward, she led Letruska from gate to wire in the Azeri, and given that she has hit the board in all but one of her 16 races, winning nine, she is impossible to leave out of calculations. Trainer Brad Cox won the Distaff last year and in 2018.

Chad Brown, who has never won the Distaff but whose barn is in sparkling form of late, has two contenders with Royal Flag by far the more appealing. This remarkably consistent mare has never been off the board in her life (6-3-3) and has slow-burned her way to prominence this year, completing the job when clearing right away for a dominant success in the Grade 2 Beldame at Belmont Park over a mile-eighth.

The only time Clairiere has been off the board in nine races is when she was fourth in the Kentucky Oaks, a familiar story of taking on Malathaat and never proving good enough to beat her. She has improved through the second half of the year, though, and finally nailed that elusive Grade 1 success when impressive in the Cotillion at Parx Racing over a mile-sixteenth. That was a lifetime best and Clairiere enters consideration, certainly for exotics players, although it remains to be seen whether she’ll ever get the better of Malathaat.

Private Mission’s stablemate As Time Goes By has failed to reproduce her fine form of the spring, when she won two Grade 2s at Santa Anita, where she has recorded three of her four victories. Since then she has finished behind Shedaresthedevil, Letruska and Private Mission, and has plenty to find on that reckoning.

Bill Mott has won the Distaff on a record five occasions, but his Horologist was well beaten in the race 12 months ago and hasn’t won a Graded stakes since, most recently chasing home Royal Flag in the Beldame. She is hard to fancy in this tough spot, which also goes for overseas challengers Blue Stripe, winner of a Grade 1 in her native Argentina but coming off a six-month break, and Marche Lorraine, whose form in Japan is several notches below what is required here.

The Distaff stands and falls on the performance of Letruska, who has dominated the division in 2021 and looks a mortal lock if able to go gate-to-wire, tactics that have brought her multiple Grade 1 victories this year. If it should go wrong for her, then the peaking ROYAL FLAG is the choice to pick up the pieces at decent odds.