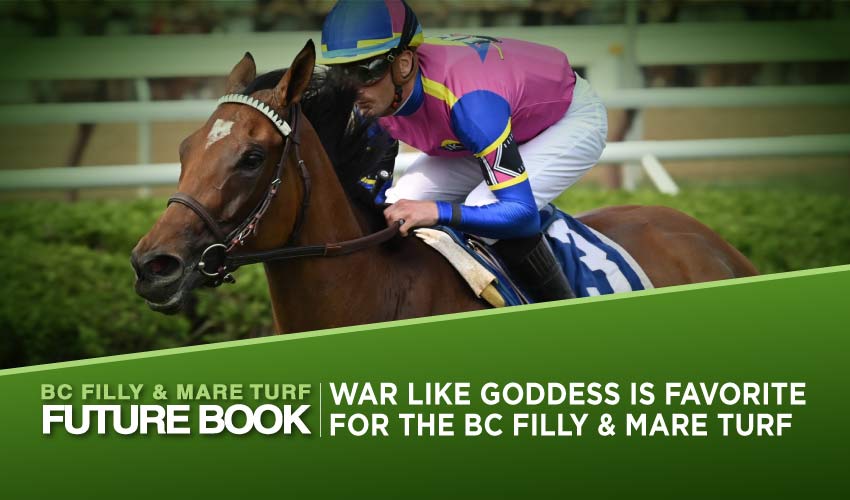 A cosmopolitan field has assembled for the 2021 Breeders’ Cup Filly & Mare Turf, with leading contenders drawn from five countries on three continents for a race that has been divided equally between winners foreign and domestic in the last ten years.

The recent history of the Filly & Mare Turf has a binary appearance, with Europe claiming five wins and trainer Chad Brown claiming four in the last nine renewals of the race. Both camps are well represented this year, but there is good potential for the pattern to change given the composition of the field.

The main hope for Europe is five-time Group 1 winner Love, whose trainer Aidan O’Brien has surprisingly never won this race. She has struggled to regain her brilliant three-year-old form in 2021, although she has never been off the board in four and won the Group 1 Prince of Wales’s Stakes at Royal Ascot by three-quarters of a length from Audarya.

Last time out Love was caught right on the line in a Group 2 at the Curragh, and was then prevented from taking her chance in the Prix de l’Arc de Triomphe by a minor illness. She is tactically versatile, switches adeptly between ten furlongs and a mile and a half, and is best on fast ground – there are no flaws in her suitability for this race, and if producing something like her best will be very hard to beat.

Last year’s Breeders’ Cup Filly & Mare Turf winner Audarya is zero-for-four this campaign, but she ran well in defeat behind Love at Royal Ascot and when beaten a short head in the Group 1 Prix Jean Romanet at Deauville in August, although that was not a particularly strong Group 1.

She got stuck in the Longchamp mud last time out, but the main stumbling block to her chance is the distance of the F&M Turf, a furlong and a half further than last year and a furlong further than Audarya has ever gone. Her conqueror at Longchamp, the French-trained Rougir, is another stretching out for the first time, but this filly also has unfamiliar ground conditions to overcome.

That success in the Group 1 Prix de l’Opera was Rougir’s first of the year after six defeats, and a lifetime best. She got there in the last jump, so the extra furlong here may not be an issue, but all her best performances have been on soft or heavy ground. On one hand she comes in the form of her life, on the other she has no experience on ground as quick as it will be at Del Mar.

Love’s compatriot Acanella should be at least double her odds on past performances – she is two-for-seven lifetime, was never a factor in Group 1 company last time out, and is going deep into unknown territory distance-wise. The form of her sole Group 3 success gives her a mountain to climb here.

War rules on the home front

The home challenge is not led by Chad Brown, just for a change, but by the magnificent Bill Mott-trained War Like Goddess, who is six-for-seven lifetime and has moved impressively through the grades during 2021.

This four-year-old filly comes to Del Mar looking for a five-timer, after victory in two Grade 3s and a Grade 2 were followed by a comfortable score in the Grade 1 Flower Bowl at Saratoga over a mile and three furlongs, when she went to the lead at the top of the stretch and drew off in a dominant display. She has the stamina and she has the class, although this will be by far her toughest test, as the middle-distance distaff division Stateside has not been notably strong this year.

Of course Brown has his contenders, headed by Flower Bowl third My Sister Nat, who was a well-beaten ninth in the F&M Turf a year ago. She broke a seven-race losing streak when a good winner of the Grade 3 Waya at Belmont Park Race Course last month, but has never won above that level. Her barnmate Pocket Square won her first stakes when beating a moderate bunch in the Grade 3 Athenia at Belmont Park, albeit with ease, and tries this distance for the first time since leaving Britain last summer.

California sweetheart Going To Vegas is on a four-timer after winning the Grade 2 John C Mabee here over a mile-eighth, by two and a quarter lengths from Dogtag, and following up by going gate-to-wire in the Grade 1 Rodeo Drive over ten furlongs at Santa Anita, in which Dogtag was third. She will be a pace factor but seems to prefer Santa Anita (five-for-12) over Del Mar (two-for-eight).

No Japanese-trained horse has ever won at the Breeders’ Cup, but Loves Only You is a high-class mare and has strong prospects of ending the 13-race losing streak of her compatriots.

She has shown considerable improvement this year, actually running her best races outside Japan when third in the mile-and-a-half Group 1 Dubai Sheema Classic behind Mishriff, and then winning the Group 1 QEII Cup at Sha Tin in Hong Kong over ten furlongs. That level of form arguably makes her the one to beat here, her preference for fast ground is another boost to her chances, and her late-closing style of running is suited to Del Mar.

Fellow globetrotter Queen Supreme is a dual Grade 1 winner in her native South Africa, but was outclassed in a Group 2 on her British debut last time out and has never won over further than nine furlongs.

Britain, Ireland, France, Japan and the US all have strong contenders in an international Breeders’ Cup Filly & Mare Turf. Loves Only You and War Like Goddess are hard to ignore, especially the former, but this distance on fast ground has always looked ideal for LOVE and she can claim her sixth G1 and give the Europeans yet another success in this race.

Get a Daily Rebate and make sure to stay tuned for the latest Horse racing odds, races entries and Races results.