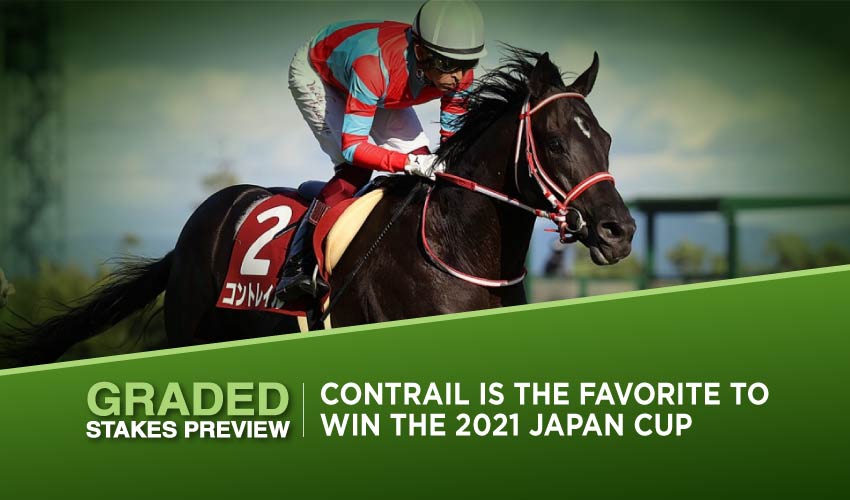 Although there are two G3 races held at Hanshin Racecourse’s Saturday and Sunday cards, the eyes of horse racing fans are pointed primarily at the Tokyo Racecourse and its 2021 Japan Cup. The second leg of the Japanese Autumn Triplecrown didn’t attract the winner of the first part, and the field isn’t as classy as in the previous years; still, Contrail’s final outing promises a race-worthy of our attention. One of the wealthiest races in the world saw victories of such aces as Almond Eye, Kitasan Black, Suave Richard, or Gentildonna, while four-year-old Contrail quite deserves to be listed among them as he’s already a Triple crown winner.

As usual, the Japan Cup welcomes some European raiders, but the most interesting fact about this year’s Japanese gem lies elsewhere – four of past Japanese Derby-winner will line up at Tokyo on Sunday as Contrail will be accompanied by Shahryar, Wagnerian, and eight-year-old veteran Makahiki.

Saturday’s race held at the Hanshin Racecourse is open to two-year-old colts and fillies who will fight for the purse of 63,110,000 Yen. They are about to cover the distance of a mile and a quarter in this G3 turf race, while most of the participants have just one outing under their belts, and those who have run more times competed only in newcomer races.

Candescent (7-5) belongs among contestants with just one racing experience as the Hideaki Fujiwara bound colt broke his maiden at the first attempt by scoring the race by one and ¾ of a length. The son of Deep Impact handled the trip of a mile and a quarter just fine, while he seems to be the leading chance here also thanks to the fact Yuichi Fukunaga will be in the saddle.

Another participant to consider is Today Is The Day (29-10), who bagged his only victory at the first attempt as well, fulfilling the role of the favourite at the same distance as Candescent. Yasutoshi Ikee’s charge left second Justin Rock (84-5) behind by a length, with Yutaka Take picking up the reigns once more. Fidele (18-5) morphed his debut into a win by a length at the distance of a mile and a furlong at Kokura; however, the colt trained by Yasuo Tomomichi and ridden by Yuga Kawada attracts attention also thanks to his pedigree as he’s a half-brother to Champagne Room, a filly who scored the G1 Breeders’ Cup Fillies in 2016. Fidele then has definitely some big shoes to fill.

The last to mention here is the only filly in the field, Orfevre’s daughter named Lilac (32-5), who broke her maiden in October by winning a newcomer race over a mile and a furlong. The Ikuo Aizawa’s charge won comfortably back then, and with Mirco Demuro aboard, she’s in the mix.

Our Kyoto Nisai Stakes betting pick is Candescent because of his fine performance at his debut.

The turf G3 over 6 furlongs is meant for three-year-old and older horses who will compete for the purse of 75,430,000 Yen.

As the three-year-old participants are given some weight advantage, they have a solid chance to score the race, so namely Lei Halia (59-10), a filly trained by Toshiaki Tajima, who has won four times in a row now. At first, Lei Halia scored a maiden, then stakes, a Listed race, and most recently, the bay filly won the G3 Keeneland Cup at Sapporo. Still, it was in August, so she might need a run before returning back to winning ways, and Eighteen Girl (13-10) may reverse the result from the Keenland Cup, where she finished second.

But being a five-year-old, she carries more than Lei Halia, and also than All At Once (71-10), who is another three-year-old filly featuring in the race, and because she’s a G3 victor as well, she is in the mix. However, her last outing dates back to July, while mentioned Eighteen Girl hit the track in October to run in 13th in the G1 Sprinters Stakes.

The prestigious event didn’t go well for Mikki Brillante (83-10) and First Force 131-5), too, yet at the G3 scene, they’ve been useful horses, so they look like place contenders. Something similar applies to six-year-old Shivaji (27-2), who was underestimated for the Sprinters Stakes but managed to snatch an excellent third place. Although he carries one of the biggest weights in Sunday’s race, he shouldn’t be overlooked again as Shivaji is a smart performer like Right On Cue (86-5), the winner of The Keihan Hai from 2019.

Our betting pick for The Keihan Hai is Lei Halia, who could win for the fifth time in a row; however, she’s never run at the Hanshin Racecourse, which might be an issue.

One of the most treasured gems of Japanese turf horse racing is held at a distance of a mile and a half, the 2021 Japan Cup. The field of 18 three-year-old and older horses will compete for the purse of 575,460,000 Yen, while the leading chance is trained by Yoshito Yahagi – Contrail (3-5). Bagging his first G1 victory as a two-year-old, the extraordinarily talented colt then scored the 2000 Guineas, Japanese Derby, and Japanese St Leger to complete the Triple Crown, upon which he finished a gallant second in the Japan Cup behind outstanding mare Almond Eye. He hasn’t won at the highest level in 2021, but his performances in the Osaka Hai and Tenno Sho weren’t bad at all, given he finished third and second, respectively. In Japan Cup, he should relish the longer trip, and Contrail may be about to conclude his racing career with a grand victory.

Regarding other local horses with huge chances of running a great race in the Japan Cup, we need to mention three-year-old Shahryar (33-10), trained by Hideaki Fujiwara, who became the Japanese Derby-winner of the 2021 season when beating preferred Efforia by a nose. Although he went on to finish only fourth in the Kobe Shimbun Hai, well beaten by Stella Veloce, he might’ve struggled with the softer ground also due to the fact he’s not a big horse. But he stays, and he fights hard, so he is considered.

This year’s Japan Cup welcomes four winners of the Japanese Derby as besides Contrail and Shahryar, Wagnerian (26-5) was the one to strike gold in 2018 who went on to finish third in the Japan Cup 2019, yet his results haven’t been much exciting lately, while Makahiki (132-1) won by a nose in 2016. The eight-year-old veteran had no luck in the Prix de l’Arc de Triomphe subsequently, and on numerous occasions, he was simply outshined by brighter stars such as Kitasan Black, Rey de Oro, or Almond Eye. Despite the fact he’s the oldest participant in the 2021 Japan Cup, he’s mentioned because of his October win in the G2 Kyoto Daishoten over the distance of a mile and a half.

In the field of 14 horses, Makahiki’s victory was just breath-taking as he spent the race in the midfield and had to face some traffic issues in the final stretch. Still, as the jockey kept asking, the veteran kept giving, and in the end, he managed to run down four-year-old Aristoteles (20-1) by a nose. Makahiki is about to face much tougher rivals in the Japan Cup, but he’s proven the will to win still resides within him. Aristoteles and back-to-back winner of the G2 Copa Republica Argentina Authority (19-2) are also in the mix.

The prestigious event often attracts raiders from Europe, which also happens in 2021 as Aidan O’Brien sends in a duo of five-year-olds. Both of them have been great at the Grade scene for their connections, and even though Japan’s (77-1) form hasn’t been top-notch for some time, his performance in the Breeders’ Cup Turf was good. The American turf suited him well, so we’ll see how he handles the one in Tokyo, which also applies to his stable-mate Broome (60-1), who ran even better in BC Turf, being denied the victory in the final stride by Yibir. Without question, these are fine horses, but both need to put on their best game if they want to challenge Contrail.

The European chances are also represented by five-year-old mare Grand Glory (96-1), trained by Gianluca Bietolini in France. The bay has progressed considerably throughout the season as after bagging her second G3 of her career in July, she succeeded in the G1 Prix Jean Romanet over a mile and a quarter. Grand Glory also showed up during the Arc meeting, running in second in the Prix de l’Opera. Although the results are great and the mare looks smart, she’s covered such a distance just once in her lifetime and hasn’t suggested her class could match the ones of the favourites.

Our 2021 Japan Cup betting pick is obviously Contrail, whose form might not be as superb as last year, but it could be enough in this competition.