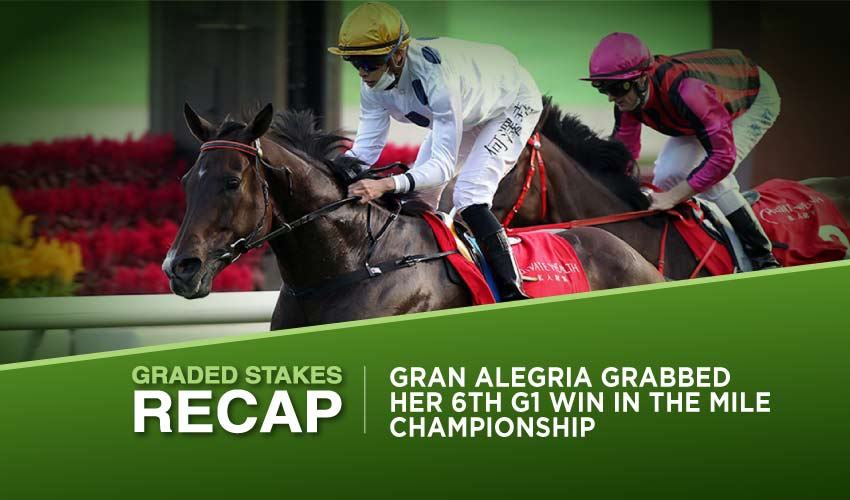 The last weekend brought two exciting races held at Japanese tracks. On Sunday at the Hanshin Racecourse Gran Alegria with Christophe Lemaire grabbed her 6th G1 win in the 2021 Mile Championship , two-year-old talents clashed at the Tokyo Racecourse in the G2 with Equinox piloted by Christophe Lemaire, striking gold in a fine fashion.

Such a success could be significant when judging the colt’s ability, given The Tokyo Sports Hai Nisai Stakes was won by Contrail in 2019, who then went on to bag the Japanese Triple Crown, and by Danon the Kid in 2020.

The prestigious G1 turf race for three-year-old and older horses was held at the distance of a mile, while the favourite was clear – five-year-old mare Gran Alegria (7-10), who strived to bag the second victory in the 2021 Mile Championship in a row. With the purse of 252,920,000 Yen, the event attracted a very classy field, yet the mare trained by Kazuo Fujisawa simply proved too good and tough for all of her rivals. Like with Equinox, Christophe Lemaire didn’t rush with his mount this time as well, let the star mare rest throughout the race, and despite the fact Gran Alegria was turning for home as one of the last, it didn’t matter as her finish was lethal.

Passing by one rival by another, the daughter of Deep Impact had enough space in the middle of the track, reducing the advantage of the lead, and once she left Indy Champ (157-10), the winner of the race from 2019, behind, the final stage strongly resembled last year’s edition of the Mile Championship. Gran Alegria scored the win in 1 m 32.60s, cementing her position as one of the best milers in Japan and signing off like a champ as a new career of a mother awaits her. Three-year-old Schnell Meister (18-5) finished second by ¾ of a length and also managed to confirm he belongs among the elite, which he showed mainly when winning the G1 NHK Mile Cup in May in front of Danon the Kid (151-10), another three-year-old in the race, who took third on Sunday.

Although fourth Indy Champ and fifth Ho O Amazon (31-10) deserve some respect for their efforts, the only star of the afternoon was five-year-old Gran Alegria, who scored her sixth G1 victory of her career. At first, she bagged the 1000 Guineas in 2019, went on to win the Yasuda Kinen, Sprinters Stakes, Victoria Mile, and twice the 2021 Mile Championship. She also displayed some versatility when being successful not only over a mile but also over the distance of 6 furlongs, and before she won her last start, he finished third in the Tenno Sho over a mile and a quarter. The talented mare is definitely special to her trainer Kazuo Fujisawa who’s about to retire, and, who knows, Gran Alegria’s gutsy performance could’ve been his final G1 success.

Although the G2 turf race was packed with two-year-olds having just one successful start under their belts, rendering the event with the purse of 72,620,000 Yen a bit of a lottery, still, the favourite didn’t disappoint and proved his victorious debut was just the beginning.

Dark bay Equinox (8-5), trained by Tetsuya Kimura, didn’t rush anywhere and spent the mile and half of a furlong long race at the rear of the field; moreover, he remained at the back until the final stretch as jockey Christophe Lemaire relied on the colt’s explosive finish. Turning for home as one of the last, he switched outside and rallied forward at the moment Al Naseem (58-10) occupied the front with a certain advantage over the rest of the field, looking all fresh and primed to go as long as it’s necessary.

However, the final stretch at the Tokyo Racecourse isn’t short, and the finishers had enough time to gain some crucial speed, which was also Equinox’s case. Flying from the outside, he not only passed by Al Naseem but also Tendence (104-10), going strongly at the fence, and in the end, Equinox held off finishing Asahi (79-10) as well. The son of Kitasan Black crossed the wire in 1m 46.20s while he bagged his premiere G2 win by 2 and a half of the length. Mentioned duo Asahi – Tendence looked interesting prior to Saturday’s race as they belonged among the more experienced participants, so Asahi showed a good effort to finish second, and Tendence had a great trip at Tokyo to grab third came.

Dante’s View (101-10) also seemed he should be capable of earning some money for the connections, which he did when running in fourth, and Red Belle Ame (7-2) was another one to catch Al Naseem, galloping enthusiastically at Tokyo, yet he just faltered in the final stage and had to settle for sixth.

Sign up and get a 10% rebate. Make sure to stay tuned for the latest races previews, recaps, Horse Racing Odds, and racing entries.

Follow us on Social Media for instant 2021 Mile Championship updates!