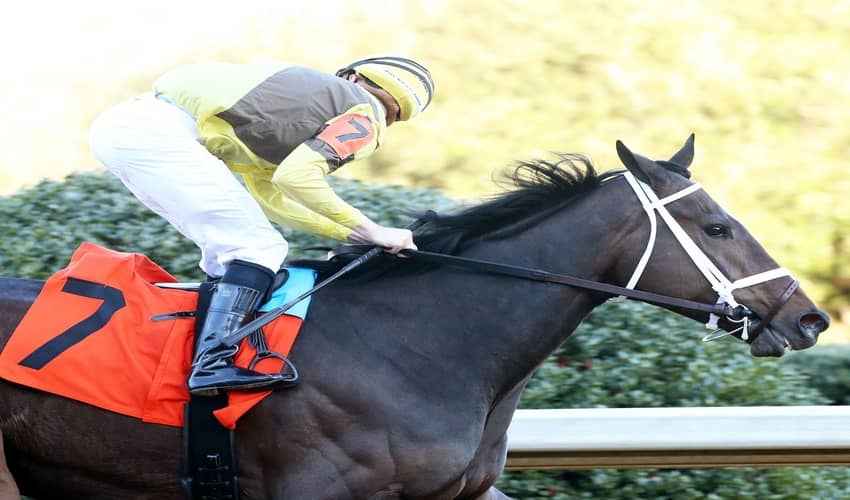 The 2021 Smarty Jones Stakes was the highlight race on Friday’s opening day of the Oaklawn Park meet. The $150,000 race is a Road to the Kentucky Derby event, meaning the top four finishers were awarded qualifying Derby points.

The Smarty Jones witnessed an impressive performance by Caddo River, who took charge early in the race and widened for a 10 1/4-length victory over Cowan. With the victory, he earned 10 qualifying Derby points.

Caddo River, the homebred son of Hard Spun, came into the race as the favorite after a blowout maiden win in November at Churchill Downs. He took the lead from the outside post and raced uncontested, registering fractions of 23:12, :47.16, and 1:12.42. He raced a mile on the fast track in 1:38.19.

It was the first time Caddo River raced two turns, as his races last year covered seven furlongs to a mile and only being one turn. He showed no problems adapting in the Smarty Jones, and he proved to be a solid router.

Florent Geroux was the winning jockey on Caddio River.

“He broke very alertly,” Geroux said. “Very nice and relaxed. You want to see these type horses doing it the right way. It’s easy to go to the lead and keep on going. You want them to relax and do everything right. He did everything perfect.”

Rest of the Field

The second-place finisher was Cowan, who won the Breeders’ Cup Juvenile Turf Sprint (G2T) and Remington Springboard Mile Stakes. He finished 7 1/4 lengths ahead of third-place finisher Big Thorn, who challenged the runner through the first of two turns.

“He ran good,” Santana said. “It was his second time going long (following his second in the Springboard Mile). I think the longer he goes, the better he’s going to be. The winner is a nice horse.”

Because of his victory, Caddo River’s connections have high hopes for his Derby potential.

“The distance doesn’t look like it’s going to be a problem,” Geroux said. “Very excited about what’s coming up ahead of us with him. Looks like he can run all day.

“Hopefully, we can go on, go up the stepping stones and have a nice horse for the first Saturday in May.”

He is looking towards a big stakes future at either Oaklawn Park or elsewhere. The 1 1/16-mile Southwest Stakes (G3) is the next big event in the track’s 3-year-old stakes program and is set to run on Feb. 15.

That same weekend will have the Feb. 13 Risen Star Stakes Presented by Lamarque Ford (G2) at Fair Grounds Race Course & Slots. Both of those races are also under consideration for Essential Quality.