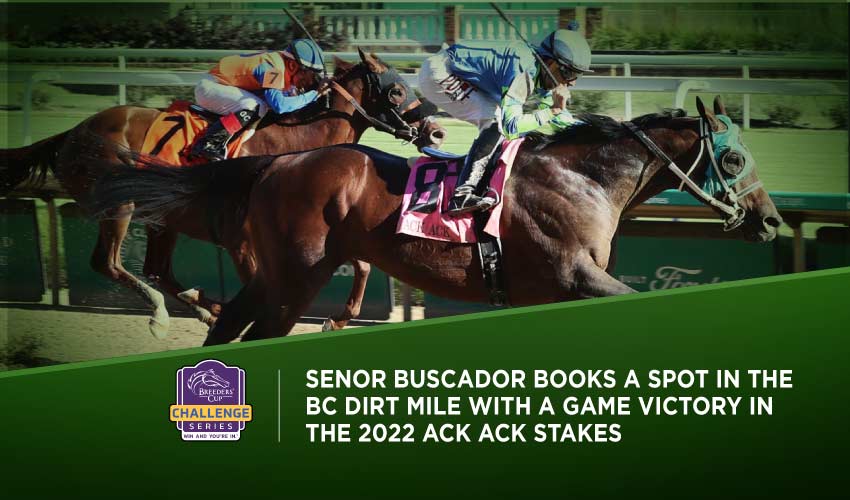 Last year’s Kentucky Derby runner-up and this year’s Kentucky Derby winner were back at Churchill Downs Track on Saturday and fought out a gripping finish to the G2 Lukas Classic, with Hot Rod Charlie pipping Rich Strike by a head. Elsewhere, Senor Buscador booked a spot in the Breeders’ Cup Dirt Mile with a game victory in the G3 Ack Ack.

The crowd at Churchill Downs on Saturday was treated to an edge-of-the-seat thriller in the Lukas Classic when Hot Rod Charlie and Rich Strike went eyeball-to-eyeball down the lane, only a head separating them when the camera clicked.

Hot Rod Charlie, the 6-5 favorite, played his pace-pressing role to perfection, never giving front-runner Art Collector a moment’s peace, and moved to the lead at the eighth pole. He was immediately challenged and soon passed by Kentucky Derby winner Rich Strike, but battled back in the gamest fashion to regain the lead in the last two strides. The longshot King Fury rallied into third, four, and a quarter lengths away; the time was 1:49 and four-fifths.

It was a welcome return to the winner’s circle for Hot Rod Charlie, official runner-up in last year’s Kentucky Derby and runner-up in the G1 Dubai World Cup in March. Trainer Doug O’Neill will now point him to next month’s Breeders’ Cup Classic, in which he finished fourth last year. The gallant Rich Strike may join him, after continuing to prove that his 80-1 shock victory in the ‘Run for the Roses’ was no fluke.

Senor does a man’s job

The lightly raced Senor Buscador has been making up for lost time this year, and the 6-1 fourth-choice made his Graded-stakes breakthrough with a battling display in the 2022 Ack Ack Stakes.

Given a patient ride by Francisco Arrieta, for whom this was also a first Graded-stakes win, Senor Buscador made a swooping move around the turn to dispute the lead with front-runner Surly Furious and took over approaching the eighth-pole. The longshot Injunction came out of the pack with a dangerous-looking challenge, but Senor Buscador put him away in deep stretch and rolled on to score by a length and a quarter, stopping the clock in 1:34 and three-fifths.

Three Technique was a one-paced third, three and a half lengths away, while the favored Speaker’s Corner ran the worst race of his life, dropping out to finish seventh.

“We were confident he’d run a big race,” said trainer Todd Fincher. “He’s had so many minor issues, but we know he’s a talented horse and he’s maturing all the time, coming into his own.”

The victory took Senor Buscador’s lifetime record to four-for-seven – he was off the track for 17 months until returning to action in July – and earned him a free pass into the G1 Breeders’ Cup Dirt Mile at Keeneland on November 5.