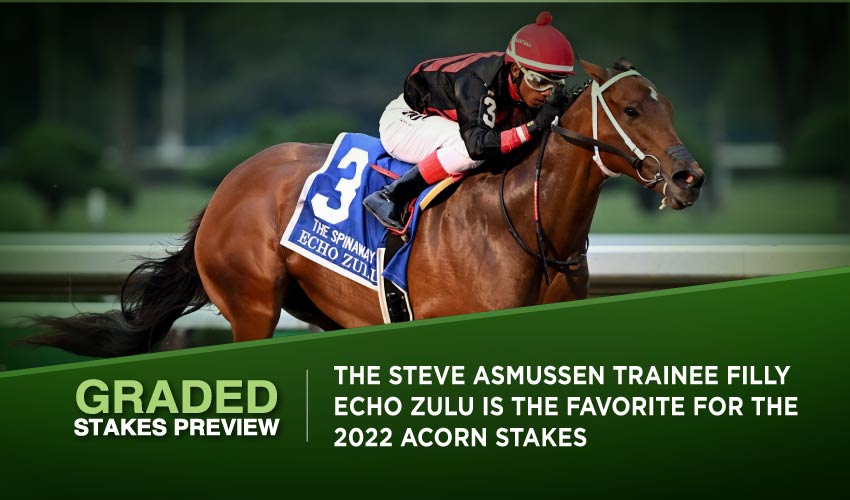 On Saturday, three-year-old fillies meet up at Belmont Park to vie for the prestigious victory in the G1 2022 Acorn Stakes. After getting beaten in the Kentucky Oaks, Echo Zulu is preferred here to return to winning ways as she should appreciate the distance.

The purse of $500,000 lured in a field of five three-year-old fillies who are about to cover the distance of a mile. In this G1 dirt race, Echo Zulu returns to shorter distances after recording her sole defeat in the Kentucky Oaks. The Steve Asmussen trained bay collected three G1 victories as a two-year-old, including a commanding performance in the Breeders’ Cup Juvenile Fillies.

In 2022, she commenced the new season with a tight win in the G2 Fair Grounds Oaks as she prevailed just by a nose, upon which she was the second chance for the Kentucky Oaks. The trip of a mile and a furlong proved too much for Echo Zulu as she galloped in second but weakened in the final stretch and had to settle for fourth place.

On Saturday, she should appreciate the shorter trip; however, due to her previous exploits, she will carry the biggest weight of all participants. Still, Echo Zulu is the favorite of the renewal. Her most serious rival seems to be progressive Matareya, trained by Brad Cox, who wasn’t anything special as a juvenile, but after bagging her seasonal debut, the Pioneer of the Nile filly bagged her premiere Graded victory in the G3 Beaumont Stakes by more than eight lengths.

Subsequently, she didn’t disappoint with her effort in the G2 Eight Belles Stakes, scoring the May race as well. Matareya recorded both her great successes over seven furlongs, so on Saturday, she needs to prove to be able to compete also over the mile among the elite as Echo Zulu definitely is a fierce opponent here.

The remaining trio would cause an upset had any of them scored. Divine Huntress looks the most interesting of the bunch, given she finished fourth in a G2 race last time out, encountering decent rivals there. Dream Lith is actually a G2 victress but from the 2021 season. In 2022, she hasn’t shown anything remarkable either on the turf or dirt surface, while Inventing has only two races under her belt, both resulting in second places in maiden companies.

Our pick for the 2022 Acorn Stakes must be Echo Zulu. She’s a multiple G1 winner with plenty of speed, and even though her future could lay in even shorter races, she should handle the mile distance here.

Follow us on Social Media for 2022 Acorn Stakes updates!