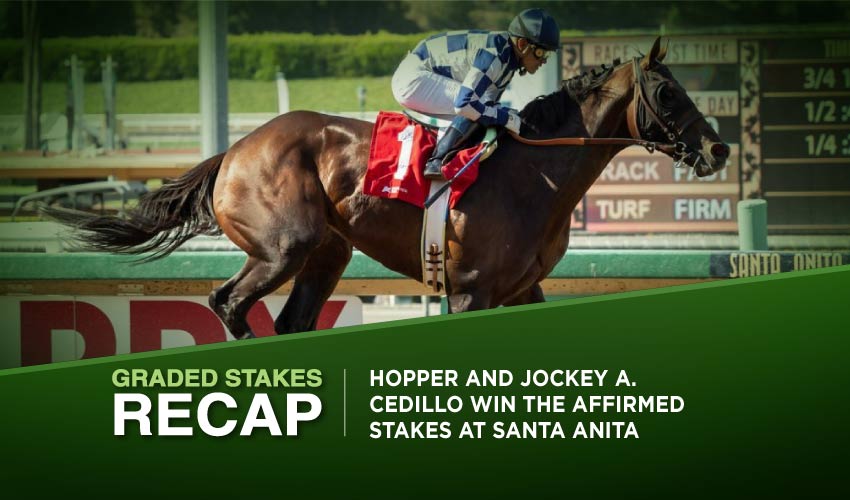 The previous weekend offered a couple of Graded races at the Santa Anita Park. On Saturday, three-year-old colts lined up for the 2022 Affirmed Stakes, where Hopper caught his stable-mate High Connection off guard and scored easily. On Sunday, Under The Stars won the G2 Summertime Oaks, while the Kentucky Oaks-third Desert Dawn again managed only third place.

The G3 dirt race for three-year-olds saw a clash of only four participants, among which Hopper (33-10) landed the spoil under Abel Cedillo.

In this mile and a half of a furlong-long event, offering the purse of $100,000, Hopper was quick on his feet, set the pace, and once the jockey asked him to draw clear from his rivals, the big bay did so effortlessly.

The Sean McCarthy bound victor broke his maiden at the second attempt in May, and on Saturday, he scored his premiere Graded victory after traveling the whole race smoothly.

To be honest, he boasted lots of talent when recording his win among maidens, however, the son of Declaration of War was a bit cumbersome at the same time, and therefore we preferred his more agile stable-mate High Connection.

However, the favorite didn’t fire at all and barely bettered the third Doppelganger. With an abysmal gap, the fourth Pioneering Papa (155-10) was the last to complete the race as both Newgrange and Fast Draw Munnings scratched prior to the race.

The G2 dirt race was held at the distance of a mile and a half of a furlong and welcomed a field of seven three-year-old fillies.

The purse of $200,000 attracted especially the Kentucky Oaks third Desert Dawn (7-10), yet the favorite didn’t strike gold also in this race as Under The Stars (18-5) secured her second G2 win. Traveling at the front since the beginning, Under The Stars subsequently won a duel with Lady T (61-10) in the final stretch to triumph by one and ¼ of a length in 1m 43.51s. Behind second Lady T, favorite Desert Dawn came home a distant third.

Trainer Sean McCarthy celebrated a successful weekend in Santa Anita Park as after scoring with Hopper, he was successful also in the Summertime Oaks thanks to Under The Stars.

The filly delivered her first Graded victory in January when bagging the Santa Ynez Stakes, upon which she earned some money in her next G3 and G2 outings.

She showed lots of talent back then, but when faced with Desert Dawn again, it seemed she was bound to manage only a place, yet Under The Stars just proved too good for any of her rivals. Under Juan Hernandez, she bravely fended off Lady T, who also gave a fine effort in her premiere start in a Graded company.

Desert Dawn was quite disappointed as she finished third but nine lengths behind the second filly. Ganadora (76-10) and Kirstenbosch (156-10) dead-heated for fourth place.