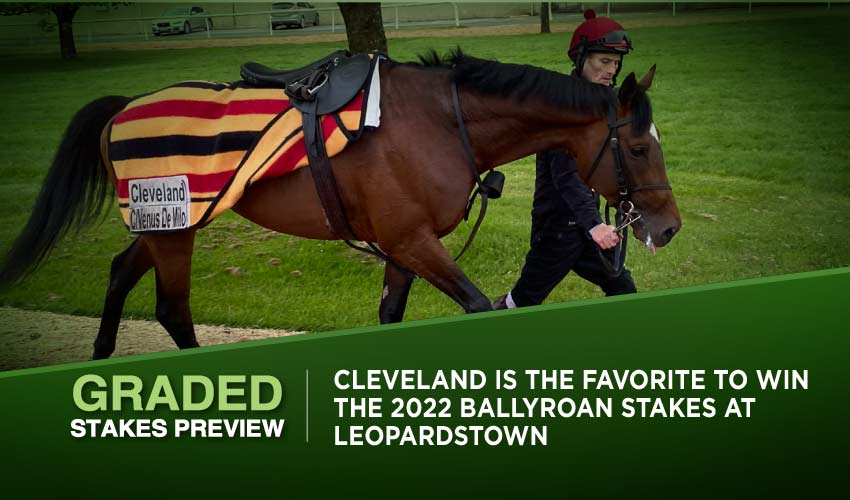 Nine runners have been declared for the 2022 Ballyroan Stakes taking place tomorrow at Leopardstown. A Grade 3 contest that is run over a distance of one mile and four furlongs, here we preview everything you need to know.

Grade 3, One mile and four furlongs. Open to horses aged three and over. Total prize pool €50,000

Expected to be heading the betting in this year’s Ballyroan is the Joseph O’Brien trained Cleveland.

An exciting horse, he has had three runs this season which include a victory in the Chester Cup as well as a good second-place finish in this year’s Copper House Stakes.

He takes a step back in trip for his first run in Graded company but based on his form so far this season he starts as a worthy favorite.

O’Brien runs two in the race with his other runner Gear Up looking to have a great chance. A second in the Group 2 last time out, he is used to performing at this level. He is yet to win a Graded race but should give his backers a real run for their money.

Arguably the most exciting horse to enter the race is the unbeaten Beamish. A winner of all three of his starts, he makes the step up to Graded company for the first time. A winner of a Listed race on his last start he should be able to contend here. If the rain comes and the ground is declared on the soft side of good, he could really be in his element.

The class angle of the race could well be with the Noel Meade-trained Layfayette. A five-year-old, he has won three of his four races this year including notable wins in both Grade 2 and Grade 3 company.

This trip is still a bit of an unknown and his last race at this distance could only yield a fifth-place finish in Hardwick at Royal Ascot. There will be hopes that he will see his race out better this time around.

All of Ireland’s biggest trainers with the exception of Aidan O’Brien have a runner in the field.

Dermot Weld has won this race nine times. He saddles two for this year’s renewal with Duke De Sessa being his most likely chance. Highly tried, he has found Group One races too hot to handle but is a previous winner of a Grade 3.

His other runner Falcon Eight is the oldest horse in the race but shouldn’t be discounted. A previous winner of The Chester Cup he should have stamina to boot and could be a player at a big price.

Top Irish jockey Colin Keane takes the ride for the G M Lyons trained Licence. Another horse with very few starts he has a lot to prove following a last-place finish in the Mooresbridge Stakes which re opposing rival Lafayette won.

Jessica Harrington runs Sandhurst who is looking to build on his two previous runs this season. Sandhurst has been placed in Group 3 company before.

The outsider of the field is the Kevin Bolger-trained Manu Et Corde. This will be his second run after being gelded but he will need to show much more than he has recently if he is to play a part.

In what is a fantastically competitive affair it might be worth siding with the value play, LAYFAYETTE. Already a winner at this level he should be a danger to all.

Follow us on Social Media for more 2022 Ballyroan Stakes updates!