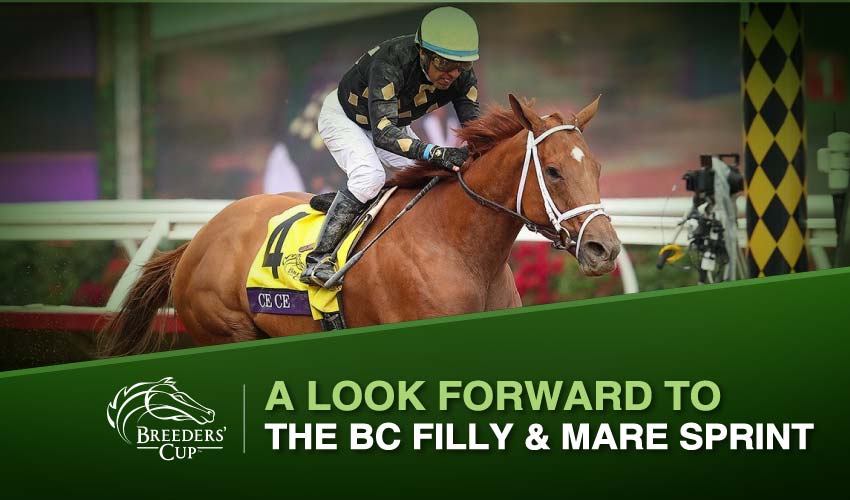 In the latest of our weekly updates looking forward to the Breeders’ Cup at Keeneland in early November, we shine a light on the leading contenders for the G1 BC Filly & Mare Sprint, which are headed by last year’s heroine Ce Ce and fellow G1 winners Obligatory, Just One Time and Echo Zulu.

The BC Filly & Mare Sprint at the world championships is a race that rarely fills as the pool of available talent is not large, so a small field is probable and the shape of the contest is unlikely to become clear until close to the day itself.

Last year’s winner Ce Ce is deservedly at the head of the future book, and although her defeat of the odds-on Gamine and Bella Sofia was a little unexpected she has built on that success in 2022, winning two G2s including the seven-furlong Princess Rooney at Gulfstream Park this month, in which she cleared right away to beat Spirit Wind by six and a half lengths. She is likely to continue her build-up in the G1 Ballerina at Saratoga on August 28.

The longshot Edgeway was runner-up behind Ce Ce at Del Mar, beaten two and a half lengths, but came out worst of a number of Breeders’ Cup contenders in the seven-furlong G1 Derby City Distaff at Churchill Downs in May.

That hot contest was won by Obligatory, with Just One Time third, Bell’s The One fourth, Kimari fifth and Edgeway beaten almost eight lengths into sixth. Obligatory – who is also being pointed towards the Ballerina –  appears to reserve her best for Churchill Downs and was well beaten in her sole start at Keeneland, but Just One Time had previously won the G1 Madison – beating Bell’s The One and Kimari – over the Breeders’ Cup course and distance.

With only eight starts under her belt Just One Time has the scope for further improvement, which does not apply to the six-year-old Bell’s The One, who has not shown her usual sparkle on her last two starts and may have peaked.

The younger generation is led by last year’s champion juvenile filly Echo Zulu, who found the mile-eighth of the G1 Kentucky Oaks too far on her most recent start. She will revert to one-turn races, but her next objective is unclear after she sustained a minor injury and was withdrawn from the G1 Acorn in June.

That race was won very easily by Matareya, who has emerged as a major force in the division with four straight wins in 2022, and she’ll bid to underline her new status in the seven-furlong G1 Test at Saratoga on August 6. She has a clear class edge over barnmate Girl With A Dream, who won the seven-furlong G3 Forward Gal at Gulfstream in February before coming off the Oaks trail after a heavy defeat in the G2 Davona Dale at the Miami circuit.

Bella Sofia and Kimari run in today’s G2 Honorable Miss at Saratoga, and their prospects will need to be reassessed following the race.

Follow us on Social Media for more BC Filly & Mare Sprint updates!