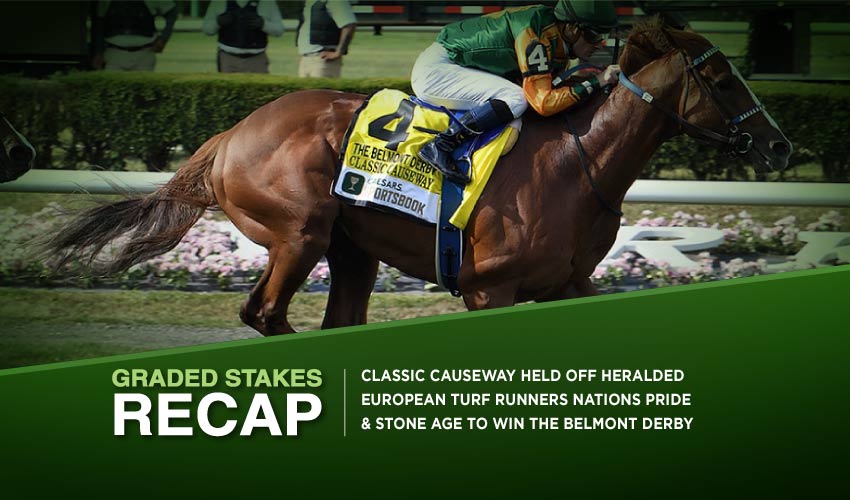 Belmont Park this Saturday saw a whole host of top-graded action. Headlined by the 2022 Belmont Derby, we review the best of the action as well as three other graded races which include – the Belmont Oaks, Suburban Stakes, and Victory Ride.

The highlight on the card, this year’s Belmont Derby saw thirteen horses head to post with some top-class horses from across the Atlantic looking to take this prestigious title home.

It was two Atlantic raiders that dominated the betting with Nations Pride and Stone Age battling it out for favoritism. The race was widely expected to go back to Europe but we witnessed an American shock.

Classic Causeway ridden by J R Leparoux for Kenny McPeek stole proceedings under a peach of a ride. Given a soft time of things up front, Classic Causeway just kept on galloping and finding more.

As the horses entered the final furlong – the challengers seemed to be closing fast but it wasn’t enough. As game as you would ever see, Classic Causeway held on in determined fashion with Nations Pride and Stone Age finishing narrowly behind. In all honesty, it would be a ride that jockeys Frankie Dettori and Ryan Moore would like back.

The Aiden O’Brien-trained Concert Hall was the favorite for the race but did look vulnerable heading into the race. McCulick was expected to speed the angle of the race but Saturday’s race saw a change of tactics.

Irad Ortiz positioned his mount in the pack and as the horses rounded the home turn, Ortiz made his move. Clearly traveling the best, McCulick hit the front at the furlong pole and strode on remorsefully to the line. With the Moonlight for Charlie Appleby could only finish 2nd with Consumer Spending, another Brown horse, clinging on for third.

Warming up the Saturday card was the Suburban. A Grade 2 contest, it was a wide-open contest with Dynamic One and First Captain expected to battle it out for supremacy.

The two-class horses in the race were a battle that disappoint. Rounding the home turn it looked like it would be Dynamic One that would win easily, he eased past his rival but First Captain wouldn’t be denied. He gamely battled back, and the two engaged in a ding-dong battle all the way up to the line. It was Dynamic One that poked his head in front when it mattered winning yet another Graded contest for Todd Pletcher.

Only five went down to post for this year’s Victory Ride where the betting was dominated by the Norm Casse Pretty Birdie. To everyone’s surprise, Pretty Birdie was a non-factor, leaving this contest wide open.

Looking to take advantage of Pretty Birdies misfortune was Luis Saez aboard Hot Peppers. Traveling smoothly, Saez made his move as he rounded the home turn. The race looked to be over but Half Enough dug in and made Hot Peppers work for his victory as he just shaded the finish.

Follow us on Social Media for the 2022 Belmont Derby & Belmont Oaks updates!