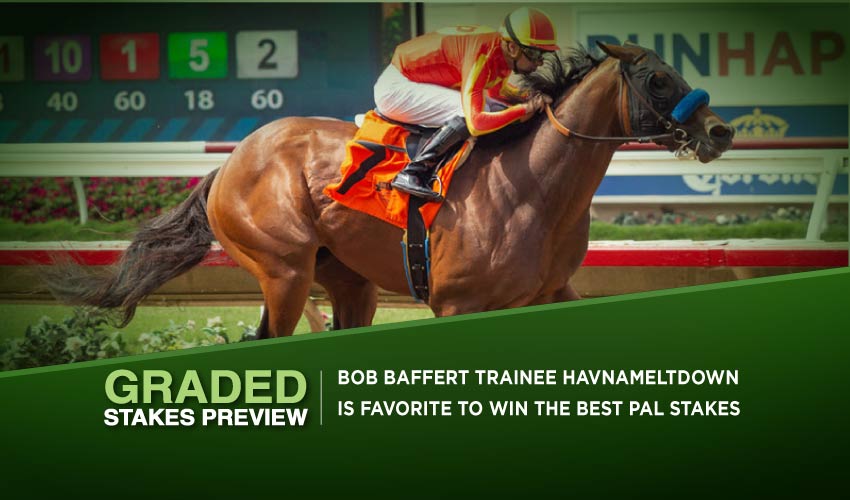 On Sunday, an interesting G3 dirt race takes place at the Del Mar Race Course. Two-year-olds will line up for the 2022 Best Pal Stakes, where Bob Baffert has recorded numerous victories, and this time, he can add another one with his favorite Havnameltdown. Still, Arman and King Adrock seem quite talented, too. The race is perceived as the trial for the G1 Runhappy Del Mar Futurity run in September.

The distance of six furlongs and the purse of $200,000 lured in a field of eleven two-year-old colts and geldings who will clash on the dirt surface.

Among juniors with one or two outings, it’s usually difficult to pinpoint the one who would improve the most on their previous starts, but in this G3, it’s definitely not wise to discard the Bob Baffert-trained Havnameltdown (11/8).

The son of Uncaptured had hit the track just once in July when the bay had a great start, set the pace, and then fulfilled the role of a favorite by bagging the five-furlong race by two and ¼ of a length. Arman (2-1) has a similar profile. The Simon Callaghan bound bay broke his maiden in June in a race over five furlongs.

Back then, the son of Bolt d’Oro traveled close to the front and took command in the final stretch, upon which he drew clear from his rival to score by two and ½ of a length. His performance was quite promising, and on Sunday, he should be the favorite’s main threat.

The rest of the field is more or less expected to fight only for the places, including Mark Glatt bound Agency (8-1), who delivered a decisive victory in his maiden in June. He’s another Bolt d’Oro offspring here, while Kangaroo Court (6-1) represents sire Dads Caps and trainer Tim Yakteen.

He didn’t manage to win his premiere outings but achieving second place wasn’t bad at all as he didn’t lose by much. Moreover, he left the rest of the field behind easily. Man Child (10-1) is another junior with one start and one triumph.

For his trainer Ryan Hanson, the Creative Cause colt prevailed in July by half a length. The last to mention is King Adrock (6-1), trained by Luis Mendez, for whom the bay scored a maiden by impressive five lengths. However, his second start in a black-type company didn’t go well at all, given King Adrock didn’t have a single bright moment and finished one but last. Still, if he shows something similar to what he did in his debut, he could be a player here.

Our pick is Havnameltdown, whose debut was a solid one; moreover, it’s hardly ever reasonable to underestimate Bob Baffert’s juniors.