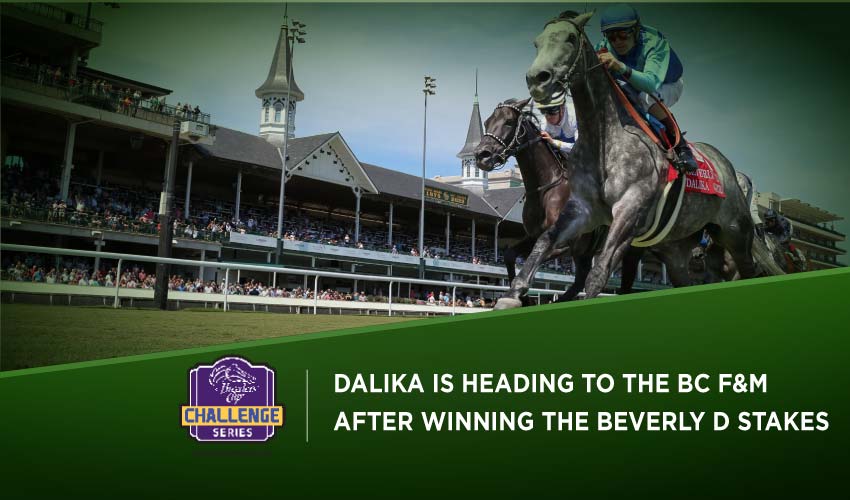 There’s something about Churchill Downs that Santin likes, as the four-year-old won his second G1 of the year at the Kentucky circuit on Saturday when a dominant winner of the feature Arlington Million. The distaff equivalent, the 2022 Beverly D Stakes (G1), produced an upset when outsider Dalika rallied gamely to post the biggest victory of her career.

This wasn’t the grand old Arlington Million of yesteryear, but there was still a hint of international flavor when Santin – owned and bred by the Godolphin empire – cruised to victory in the main event at Churchill Downs on Saturday.

The key to success was the drop in distance, Santin having come up short over ten furlongs last time, and the four-year-old – the 5-2 third-choice – used his speed to press the pace-setter Smooth Like Strait and then run by him a furlong out, kicking away under Tyler Gaffalione to win by a length and three-quarters in a time of 1:46 and four-fifths. Aptly, Santin’s share of the purse made him a millionaire.

Smooth Like Strait, an increasingly frustrating individual, was runner-up for the sixth time in his last seven starts in a race that only ever concerned the first two, with poor tactical rides compromising the chances of third-placed Sacred Life, beaten five and three-quarter lengths, and the favorite Set Piece in fourth.

“He delivered on what we thought he could do,” said trainer Brendan Walsh. “This mile-eighth is as far as he wants to go, and I wouldn’t be shy to drop him back.

“When I first came to America the first track I came to was Arlington. I always wanted to win the Arlington Million, so this is fantastic, no matter where it’s run.”

There was a surprise result in the supporting feature, the Beverly D, when Dalika – who in a long career had never previously appeared capable of winning at this level – made just about all the running as the 7-1 outsider of the five-runner contest.

The six-year-old broke on top under Brian Hernandez and set out to stretch the field, but looked in trouble when Princess Grace nosed in front at the top of the lane. However, Dalika is clearly made of tough stuff and rallied to regain the lead well inside the last sixteenth, getting home by a half-length, stopping the clock in 1:46 and one-fifth.

Princess Grace had two lengths to spare over Family Way in third, while the favorite Rougir ran another poor race, never out of last place all the way around.

Dalika, trained by Al Stall, was recording only her second win at Graded level, but could now have the opportunity to shoot for the big time as the Beverly D is a win-and-in for the G1 Breeders’ Cup Filly & Mare Turf. However, she was not nominated to the Breeders’ Cup as a foal and connections will have to pay $200,000 to put her in the gate at Keeneland.