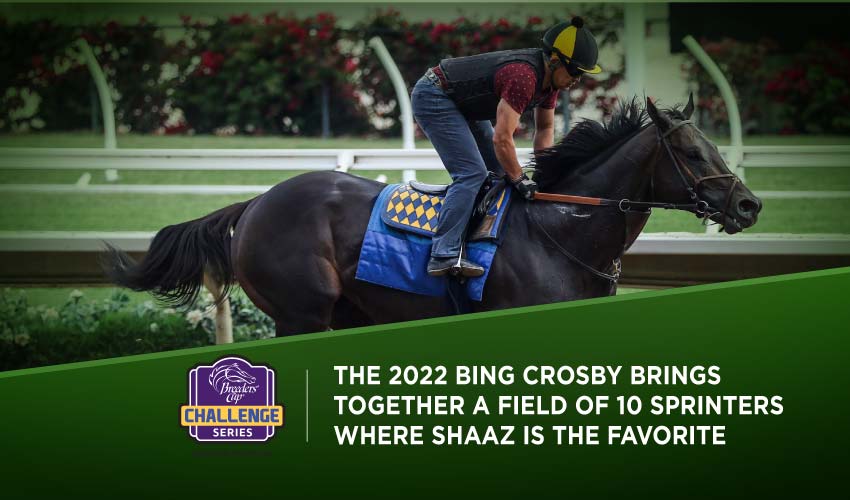 Del Mar hosts its first G1 of the summer on Saturday and the 2022 Bing Crosby brings together a field of sprinters with plenty to prove, headed by the lightly raced Shaaz and last-time-out G2 winner American Theorem. The highlight of the undercard is the G2 San Diego, which features the return to action of Dubai World Cup winner Country Grammer.

Racing in California is going through a relatively fallow spell at the moment, with true quality thin on the ground. How else to explain the morning-line favorite for the 2022 Bing Crosby at Del Mar on Saturday – a win-and-in for the Breeders’ Cup Sprint – being a horse who has never run at the distance and never won a stakes race?

The horse in question is the lightly raced Shaaz (7-2), who only made his debut at the very end of last year, and who rattled off a hat-trick in minor company before giving up his streak on his stakes debut, running third when favourite for the G3 Steve Sexton Mile at Lone Star Park, which was not a notably hot contest.

He is promising, he is improving, but this represents a big rise in class and a big cutback in distance, and his odds appear to be based on his trainer, although that’s never a terrible basis for assessment.

Admittedly, it’s not a tough spot. The only Graded stakes winner this year is American Theorem (4-1), who won for the first time at that level when coming late to steal the seven-furlong G2 Triple Bend at Santa Anita by a nose from Principe Carlo (6-1), with longshot Get Her Number (12-1) three and a quarter lengths back in third. The race was opened right up when hot favorite Brickyard Ride ran a stinker and the value of the form is debatable, but it still puts the first two in the mix here, although Principe Carlo has only won one stakes in his career.

Florida shipper Drain The Clock (4-1) has been inconsistent since winning last year’s G1 Woody Stephens at Belmont Park and was a disappointing fourth in the G3 Smile Invitational at Gulfstream Park last time. He can’t be ignored given his journey time and today’s distance will suit just fine.

This is the stakes debut for Bagboss (8-1), who has never been off the board in eight starts and looked ready for a rise in class when scampering away with a six-furlong allowance optional claimer at Churchill Downs in a fast time. He can run from off the pace or share what is likely to be a crowded pace scenario.

He is zero-for-three at Del Mar but Letsgetlucky (6-1) is worth another shot after chasing home champion sprinter Jackie’s Warrior in the six-furlong G3 Count Fleet Sprint at Oaklawn Park in April, although he was flattered by his proximity to the winner, while Desmond Doss (10-1) has been looking good in short-field state-bred stakes races but needs to raise his game considerably to make an impact at this level.

This won’t take as much winning as its G1 tag suggests, and maybe LETSGETLUCKY can build on last-time-out improvement at a distance that suits him well.

Bob Baffert is easing back into the big-race swing after serving a 90-day medication suspension and there are parallels between his main hope for the San Diego and his 2020 winner of the race, Maximum Security.

Maximum Security was coming off a break after winning the Saudi Cup, and Saudi Cup runner-up Country Grammer (5-2) is doing the same after landing the Dubai World Cup, doing all his best work late at Meydan to beat Hot Rod Charlie by a length and three-quarters. It’s always a concern when a horse returns after a trip across the world, but Country Grammer has had a four-month layoff and should be back in the groove.

It’s debatable whether he’ll be at his best today, though, as he seems better at ten furlongs, over which he beat Royal Ship (4-1) by a head in last year’s G1 Hollywood Gold Cup at Santa Anita. Royal Ship is probably better over shorter and was an impressive winner of a stakes over a mile at Santa Anita in April, but consistency is an issue with him.

That is also a problem for G1 Pacific Classic winner Tripoli (6-1), whose trainer John Sadler has an excellent recent record in this race. Tripoli was runner-up here 12 months ago, three-quarters of a length ahead of Royal Ship, but has run poorly in his last three starts – the most recent on turf – and lacks a convincing profile.

Another looking to bounce back is last year’s official Kentucky Derby winner Mandaloun (4-1), who threw in a real clunker in the Saudi Cup and was then well below-par when fourth in the G2 Stephen Foster at Churchill Downs four weeks ago. There’s no doubt he has the class to figure and that comeback run should have sharpened him up.

The frustrating Stilleto Boy (6-1) made every yard when winning the G2 Californian over a mile-eighth at Santa Anita in April, but took a step back when unable to make the lead in the Hollywood Gold Cup, fading to finish fourth behind There Goes Harvard (5-1), Defunded (5-1) and Royal Ship, and at this shorter distance may not have the pace to set fractions.

There Goes Harvard, who has hit the board in every race he’s completed, is cross-entered in the G1 Eddie Read here on Sunday but would be a major player  in this, as that victory was his first at stakes level and clear evidence of a horse on his way up. Defunded, barnmate of Country Grammer, is a likely pace factor and is a winner over course and distance, but would need a career-best to make those tactics stick, although he too is capable of improvement.

There are question marks over almost all of these, but THERE GOES HARVARD is a horse very much on the up and can build on his G1 success last time.

Follow us on Social Media for more 2022 Bing Crosby updates!