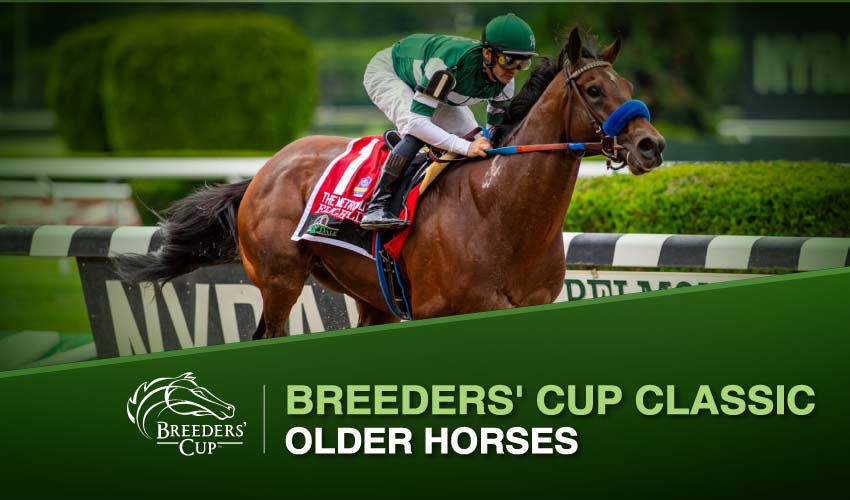 It’s never too soon to whet the appetite for the magnificent feast of the Breeders’ Cup, this year held at Keeneland on November 4-5. Here, in the first of a series of forward glances at the fall super-festival, we examine the strength of the Breeders’ Cup Classic older horses who are being targeted.

He remains the most exciting horse in America, and Flightline is firmly on course for the Breeders’ Cup Classic after stretching his unbeaten run to four with a romping, dominant score in the G1 Metropolitan over a mile at Belmont Park.

The son of Tapit just ran clean away from his rivals in the Met Mile, drawing right off to beat Happy Saver by six lengths and taking his aggregate winning margin in those four starts to a crazy 43 and a half lengths. No horse has yet been able to test him, and at Belmont he proved he wasn’t just a one-dimensional front-runner when rating nicely behind the pace before powering clear.

There have been no flaws in anything we’ve seen from him, although he has yet to stretch out beyond a mile. Flightline will likely get that chance in the ten-furlong G1 Pacific Classic at Del Mar on September 3, although that conversation has also included the G1 Whitney over a mile-eighth at Saratoga on August 6.

That race at the Spa could be a proper barnburner, with the top-class Life Is Good pointed that way after it looked as though stamina tripped him up when fourth in the G1 Dubai World Cup over ten furlongs at Meydan. The surface there is deep and tiring, though, and Life Is Good may well see out the Classic distance back on home soil.

Another Whitney probable is last year’s BC Classic fourth Hot Rod Charlie, runner-up in the Dubai World Cup before posting a below-par performance when runner-up in the G3 Salvator Mile at Monmouth Park last week. He is rock-solid but lacks the potential for improvement of Flightline and, to a lesser extent, Life Is Good. That sufferer from seconditis Happy Saver may also try the Whitney, but the G2 Suburban at Belmont on July 9 looks a much better fit for him.

The Dubai World Cup winner Country Grammer has returned from injury better than he was before, and his performance at Meydan – beating Hot Rod Charlie by a length and three-quarters – indicated that he can make it pay outside the shallow waters of the California circuit. He’ll return home to prep, though, with the G2 San Diego over a mile-sixteenth at Del Mar on July 30 next on his dance card.

That may also be the next stop for Big ‘Cap winner Express Train, who has the stamina for the Classic distance but needs to find more to contend at that rarefied level of competition.

Last year’s Kentucky Derby runner-up/promoted winner Mandaloun needs to rebuild after running the worst race of his life when ninth in the G1 Saudi Cup, and that process will start in the G2 Stephen Foster over a mile-eighth at Churchill Downs on July 2, where the opposition may include Scalding and Americanrevolution, third and fourth in a stakes over that course and distance earlier this month.

An interesting candidate is the Japanese-trained Cafe Pharoah, a dual G1 winner at home, although he is inconsistent and has never made it pay over further than a mile. The BC Dirt Mile may be his best spot.