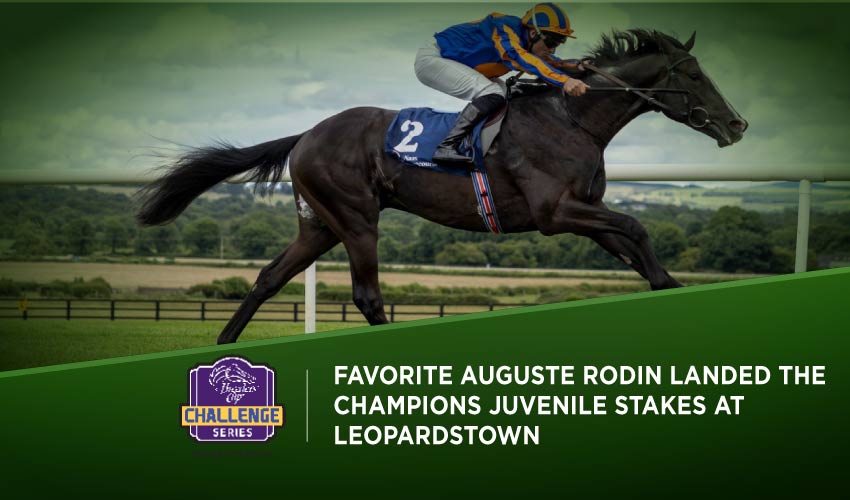 Some exciting races were held on Saturday at the Leopardstown Race Course in Ireland. We focus on three Graded events in this article, including a couple of G2 ones. At first, Auguste Rodin affirmed his role of a favorite and bagged the Champions Juvenile Stakes, while Jadoomi was all class in the Boomerang Mile as he easily bettered every single one of his opponents. Duke de Sessa then narrowly prevailed over the trip of a mile and a half in the G3 Paddy Power Stakes even though he hit such a distance for the very first time.

Five two-year-olds clashed in this G2 turf race over a mile, and it was the favorite Auguste Rodin (11-10) who landed the race.

The purse of €150,000 lured in the Aidan O’Brien-trained colt who galloped in fourth place, upon which Ryan Moore urged the bay to challenge the leaders. In the final stretch, Auguste Rodin rallied forward, took command, and he was always doing enough to keep his rivals at bay.

The son of Deep Impact and a brilliant mare Rhododendron triumphed by one and ½ of a length in 1m 45.25s, leaving outsider Caroline Street (18-1) in second. Alder (12-1) took third place.

The victorious bay achieved his premiere Graded victory after he experienced two attempts among maidens. At first, he was an unlucky second and then delivered in a race over seven furlongs.

On Saturday, he proved to be also suited by a mile, and because he looked pretty mature, he could bag another big one until the end of the season.

Caroline Street trailed in last, but her finish was enough to grab second in the final stretch, with Alder keeping on third. Serious Challenge (6-1) dropped to fourth after setting the pace together with Tower of London (2-1), the victor’s stable-mate, weakening when turning for home. He crossed the wire last.

In the competitive field of three-year-old and older horses, Duke de Sessa (6-1) showed he could handle even the distance of a mile and half as he scored this G3 turf race in 2m 41.29s.

The purse of €100,000 lured in nine participants, among which Duke de Sessa traveled in the midfield and under Chris Hayes, he spent most of the race on the outside.

In the final stretch, the Dermot Weld-bound three-year-old bolted up and willingly closed on his rivals, already fighting for the win; however, Duke de Sessa managed to catch them just in time. The son of Lope de Vega went in front of Thunder Kiss (4-1) and Beamish (18-5) to triumph by a short head.

Duke de Sessa bagged his first Graded victory in 2021, while in the ongoing season, he failed to live up to the expectations and didn’t make it to the Epsom Derby.

He didn’t impress in any of the trials and then didn’t shine even over the mile in the Irish 2000 Guineas; however, he delivered a solid performance in the G3 International Stakes, where he finished second.

On Saturday, he was one place better and snatched up his second G3 win, using his weight advantage over brilliantly going Thunder Kiss to the fullest. Beamish was a gallant third only by a head to the second mare, while preferred Point King (7-2) lost pace in the final stretch and finished last.

The €200,000 G2 race saw a display of class from four-year-old Jadoomi (9-4), who smoothly overcame the weight advantage and triumphed over the distance of a mile by four lengths.

Piloted by Christophe Soumillon, the bay gelding was always close to the front; soon enough he seized the lead, and once the jockey asked him some question in the final stretch, Jadoomi answered them with ease.

The Simon & Ed Crisford bound bay scooted clear from his rivals to bag his third victory in a row as he crossed the wire in 1m 45.38s. Glounthaune (40-1) denied the odds to finish second in front of Boundless Ocean (3-1).

Jadoomi carried one of the biggest weights here because of his recent exploits. The Holy Roman Emperor gelding scored a big race back in 2020 but couldn’t entirely draw on that performance until this season, as he’s unbeaten in all three outings.

After narrow victories in Listed and G2 races, he added another triumph on Saturday; however, he was really impressive this time. Basically, he didn’t give a chance to his rivals who fought only for second place whereas outsider Glounthaune was more successful, denying third Boundless Ocean by a head.