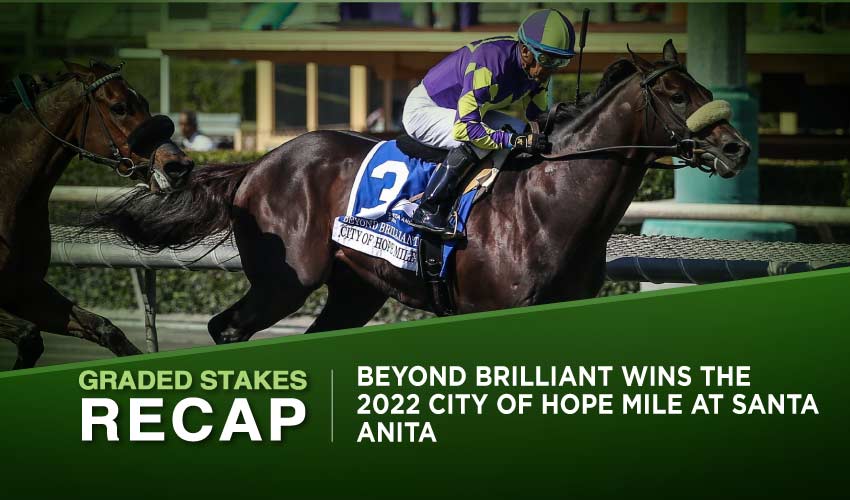 Mark Glatt was the man of the hour at Santa Anita on Saturday, saddling two Graded winners – Howbeit (G2 Santa Anita Sprint Championship) and Whatmakessammyrun (G2 Eddie D) – on the same card for the first time in his career. Elsewhere, front-running phenomenon Beyond Brilliant justified favoritism in the G2 2022 City Of Hope Mile, and Masteroffoxhounds ended a long losing run when also leading every step of the way in the G2 John Henry Turf Championship.

Beyond is brilliant again

Plan A worked like a charm for Beyond Brilliant at Santa Anita on Saturday, the confirmed trailblazer getting his own way out front in the 2022 City Of Hope Mile and cruising to a straightforward success.

All the four-year-old’s victories have been earned gate-to-wire and he’s only missed the board once at Santa Anita, so when the 4-5 favorite broke on top and went to the lead under Victor Espinoza it seemed okay to count the chickens.

Beyond Brilliant rolled through brisk fractions – the half went in 46 and change – and was never threatened, crossing the line three-quarters of a length clear of second-choice Cathkin Peak, with two and a quarter lengths further back to Prince Abama. The stopwatch showed 1:32 and three-fifths.

“Victor got him on a nice long rein and he wasn’t fighting him,” said trainer John Shirreffs. “The horse really relaxed on the lead, and that’s the key to him.”

This was the third Graded score for Beyond Brilliant, adding to last year’s G1 Hollywood Derby and the G2 Charles Whittingham here in April and marking a return to his best after a dull effort at Del Mar on his previous start. The Breeders’ Cup Mile is now a possibility, but the colt would be a longshot in that field and Shirreffs has not confirmed a trip to Keeneland next month.

Howbeit shows them how

Like a flash of lightning out of a clear blue Californian sky, Howbeit came out of nowhere to spring a surprise and make his stakes breakthrough in the Santa Anita Sprint Championship.

The five-year-old was greatly assisted by the speed duel laid down by the favorite Forbidden Kingdom and the second-choice Kid Corleone, and when that pair emptied out at the top of the lane Howbeit was there to pick up the pieces. The 6-1 shot hit the front at the sixteenth-pole and although C Z Rocket staged a big rail rally it wasn’t quite enough, Howbeit getting the verdict by a nose. Super Ocho was a length back in third; the time was 1:10 and one-fifth.

“This horse has had some unlucky trips,” said winning jockey Mike Smith. “We needed every bit of that good trip today because at the wire I wasn’t too sure we’d got it.”

They had, and it was a seventh career victory and a fourth at Santa Anita for Howbeit, who had been zero-for-five in stakes before the gates opened. His trainer Mark Glatt was non-committal about the Breeders’ Cup Sprint for a horse claimed for just $32,000 in February 2021.

Richard Mandella was downbeat about the performance of Forbidden Kingdom, a dual G2 winner here last winter. “He didn’t break sharp, he didn’t seem to have his heart in it,” he said.

Half an hour later, Mark Glatt signed for an even bigger upset in the Eddie D, in which 18-1 outsider Whatmakessammyrun landed his first Graded-stakes success at the fourth attempt.

Another strength-sapping speed duel, this time between Goliad and Barristan The Bold, set things up for something coming from behind and Whatmakessammyrun was in the right place at the right time, splitting horses at the top of the stretch and surging to the lead under Joe Bravo.

Rail runner Lane Way kept him honest through the final furlong but Whatmakessammyrun had it all under control, getting home by three-quarters of a length, stopping the clock in 1:11 and one-half.

The favorite Gregorian Chant was last of the nine runners to past halfway and left his charge too late, taking the ‘show’ spot a length and a quarter behind Lane Way.

“He’s not quite fast enough going five-eighths, and I knew he’d improve with more ground to work with,” said Glatt, winner of two Graded stakes on the same card for the first time in his career. “It worked out beautifully today.”

In June, Whatmakessammyrun had run fifth in the G1 Jaipur at Belmont Park, but seems to prefer things out west as he is now unbeaten in three starts at Santa Anita. The Breeders’ Cup Turf Sprint is an unlikely destination for the four-year-old.

It was a long time between drinks for Masteroffoxhounds but he finally killed that thirst in the John Henry Turf Championship, going coast-to-coast to snap a nine-race losing streak that stretched back to February 2021.

The 2-1 second-choice broke on top under Umberto Rispoli and towed the field along at steady fractions before quickening the pace around the turn, opening up a three-length advantage. It was a wise move by Rispoli because he needed that legroom as the posse closed in the final eighth, Masteroffoxhounds hanging on by a neck from Dicey Mo Chara as the camera clicked, with barnmate and favorite Gold Phoenix a head behind in third. The time was 1:59 and four-fifths, speedy enough considering the gentle early pace.

“That’ll give him a bit of confidence,” said trainer Phil D’Amato, whose three runners finished 1-3-4. “They went steady and flew home.”

Masteroffoxhounds began his career in Ireland and was trained by Aidan O’Brien, Jessica Harrington and Richard Baltas before joining D’Amato in May. This was just his fourth win from 19 starts and he is not under consideration for the Breeders’ Cup Turf, with the G2 Seabiscuit at Del Mar on November 26 his next objective. His barnmate Gold Phoenix, who has already earned a free berth into the BC Turf, will represent D’Amato at Keeneland.