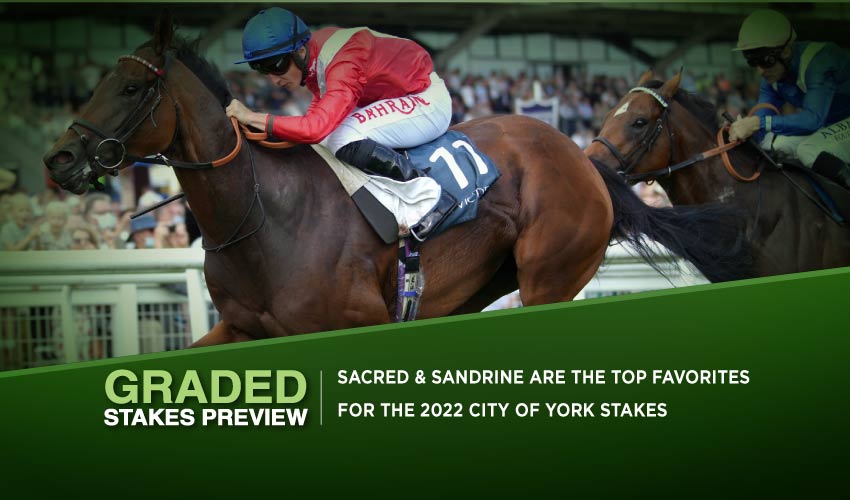 This year’s York Festival will conclude this Saturday 20th August and one of the best races of the day is the 2022 City of York Stakes. In a Group 2 contest, at the time of writing ten horses have been declared. Here is everything you need to know.

In what is one of the fiercest betting heats of the week, the betting for this year’s City of York Stakes is exceptionally tight.

Currently heading the top of the market as duel favorites are the combination of Sandrine and Sacred.

Andrew Balding has already tasted success this week and he has another live chance with Sandrine. A cozy winner of the Group 2 Lennox Stakes he heads to York in arguably the best form of his career and could be very difficult to beat.

Looking to pip Sandrine to the post is Sacred. A former Grade 2 winning horse, he has had a frustrating season so far and it’s hard to gauge his recent form. He ran with credit in the Platinum Jubilee Stakes before only finishing 5th in the Lennox Stakes. He finished well behind Sandrine that day and it’s a bit of a surprise that so many pundits believe he can reverse that form here.

Another horse bringing Lennox Stakes form into the race is Kinross. Desperately unlucky not to have won the Lennox she was very fast finishing second and has a great chance of playing a part here.

It’s been a frustrating week for Charlie Appleby but he will be hoping to sign the week off in style and he has a viable contender in Al Suhail. He was a comfortable winner of Grade 2 last season but has only had one race so far this year. His fitness is a worry, but if he can put it altogether nobody can dispute his class.

Rohaan had a stunning season last year and is arguably the most campaigned horse in the field. He could be the value play of the race, he finished fourth in a hot Group 1 contest in his last run and his chances can’t be dismissed.

Jim Crowley has already had a memorable week following Baaeed’s comfortable success in the Juddmonte International earlier in the week. He will have hopes of ending the week on a high and in Jumby he has a live chance.

Jumby was an impressive winner of the Grade 2 Hungerford Stakes and if he can bring that form into this contest he could be one to watch.

Brad The Brief is unbeaten this season following two victories. He has been off the track since May but his last run in the Greenlands Stakes offered some promise. That win came over in Ireland and represents some decent form. He could be another at an attractive price who could have a major say on proceedings.

This is such a hard race to call and this is a race that could go in several different directions. Rohaan could be a player following his Group 1 form and at a decent price, he could be a really attractive horse to follow.

Follow us on Social Media for more 2022 City Of York Stakes updates!