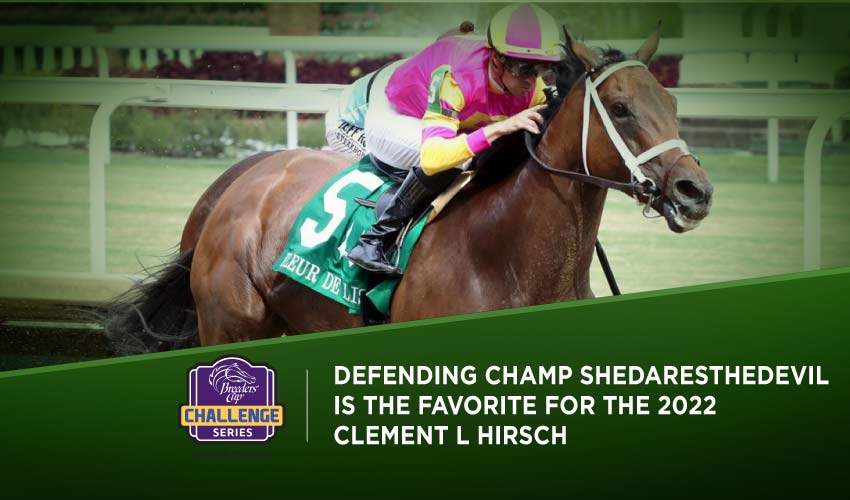 Last year’s winner Shedaresthedevil is the headline act in the 2022 Clement L Hirsch at Del Mar on Saturday, but the star mare faces stiff opposition in the shape of Private Mission and Blue Stripe, first and second in the G2 Santa Maria last time out.

Some brilliant mares have won the Clement L Hirsch on multiple occasions, with Zenyatta, Azeri and Stellar Wind on that list, and there’s a candidate to join them in Saturday’s feature at Del Mar, a win-and-in for the Breeders’ Cup Distaff.

Twelve months ago Shedaresthedevil was favorite to beat a small field and did the job well, drawing off through the stretch for a clear-cut victory and the third G1 score of a tremendous career. This time around she’s top of the tote board again and comes along on the back of a straightforward success in the G2 Fleur de Lis at her beloved Churchill Downs, where she is six-for-seven.

Before that win, though, there were signs that she was losing her grip on the brilliance that has powered her to a ten-for-20 lifetime record and a fistful of big-race triumphs. Two defeats, in the G2 Azeri and the G1 La Troienne, had left her looking vulnerable and she’s no foregone conclusion away from her Louisville home, especially against better opposition than last year.

That opposition is led by Private Mission, who returned from a lean spell to take the mile-sixteenth G2 Santa Maria at Santa Anita by three-quarters of a length from Blue Stripe , holding on gamely in the face of a sustained rally from the runner-up. She has abundant early speed, whereas Blue Stripe is a solid closer and worked those tactics well to win the G2 Santa Margarita (also at Santa Anita) over a mile-eighth on her previous start, with Lisette beaten a long way into sixth and now zero-for-three in stakes.

This intermediate distance favours Private Mission over Blue Stripe, although there is unlikely to be much between them again.

Three-year-olds have a poor record in this race so Desert Dawn is at a minor disadvantage despite her good recent form. She gained an upset win in the G2 Santa Anita Oaks and ran the race of her life to finish third in the G1 Kentucky Oaks at Churchill Downs, but then blew her chance in the G2 Summertime Oaks back at SA when stumbling badly at the start, eventually finishing third.

She needs more against this calibre of rival but is certainly preferred to fellow Santa Anita Oaks winner Soothsay, who has been off the track for 13 months since winning the G3 Indiana Oaks and is likely to need the outing.

This is a step back up in distance for Samurai Charm after hitting the board in two Graded sprints, latterly the G2 Great Lady M at Los Alamitos, and in this company it may not be the right move.

Last year’s winner Shedaresthedevil may just be losing her edge, and the pacy PRIVATE MISSION is the choice to deny the favourite a repeat success.