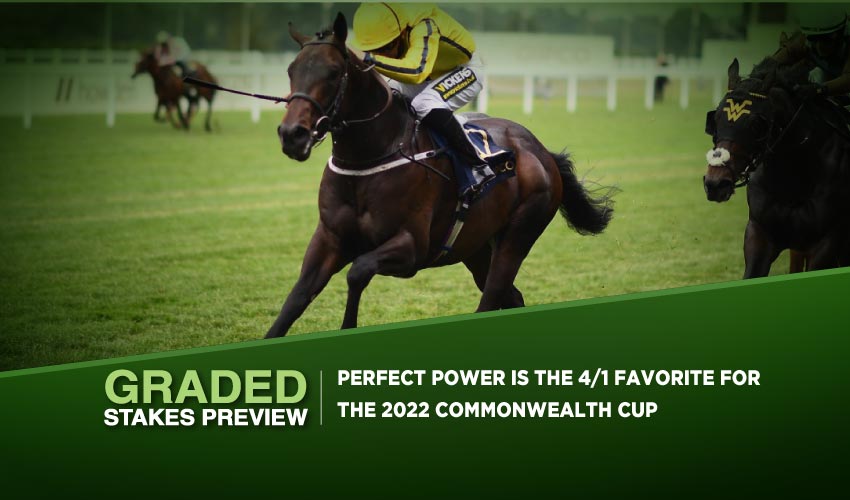 On Friday, there are two G1s about to be held at Royal Ascot. At first, three-year-old sprinters clash in the 2022 Commonwealth Cup over six furlongs, where Perfect Power should appreciate the shorter distance than he ran on in the 2000 Guineas. Subsequently, three-year-old fillies meet up in the Coronation Stakes over a mile. Inspiral makes her seasonal debut here and will be faced with tough nuts to crack in two Classic winners, Cachet and Mangoustine.

This G1 turf race is perceived as the peak for three-year-old sprinters who are about to cover the distance of six furlongs. Vying for the purse of £500,000, Perfect Power looks like the leading chance as he’s already achieved a G1 glory.

In 2021, the Richard Fahey trained colt bagged four victories out of six starts, including triumphs in the G1 Prix Morny and Middle Park Stakes. The son of Ardad was genuinely an outstanding two-year-old, and he similarly commenced the new season when running down the competition of the Classic trial, the G3 Greenham Stakes.

That speed is his forte nobody really doubted, so Perfect Power didn’t belong among the favourites for the 2000 Guineas, where he finished seventh. On Friday, he returned to a shorter distance and could bag his third victory among the elite. Although he might prefer seven furlongs, he’s easily handled six in the past, so he’s the favorite of the 2022 Commonwealth Cup, with El Caballo looking like his most serious threat.

The Karl Burke bound bay has taken an entirely different route than Perfect Power. Indeed, he has seven runs under the belt and six of them victorious; however, he has shown up in a Graded company just once.

Regardless of that, the Havana Gold colt has proved to be very classy in 2022. At first, he scored by a length a Listed win, subsequently bagged a prestigious race for three-year-olds on the all-weather track, and when he was sent to the G2 Sandy Lane Stakes over six furlongs and turf surface, El Caballo prevailed by a neck.

Back then, he left behind some interesting contestants, including Go Bears Go. On Friday, another step up awaits him, but this bay sprinter seems to be ready for it.

Mentioned Go Bears Go needs to be considered as well, given he won a G2 race as a two-year-old and placed third at the G1 scene. In 2022, he added a G3 win to his record, and even though he failed to fulfil the role of a favourite in the Sandy Lane Stakes, he should be able to snatch up a fine place here.

The same goes for Ehraz, a smart performer who will probably lack something in the Commonwealth Cup to actually threaten the favorites. The last to mention is Twilight Jet, who ran eleven times as a junior, earning some money in Graded races and winning at the G3 level. The distance of six furlongs seems ideal for him, which he affirmed by his May victory in Naas, where he left his rivals behind at least by three lengths.

Must be Perfect Power, who has been brilliant at the G1 stage, and despite the 2000 Guineas flop, he is the one to beat here.

The G1 turf race is the pinnacle of the meeting for three-year-old fillies. The purse of £500,000 attracted the best of them who are about to cover the distance of a mile, on which Cachet earned her Classic glory in May.

The George Boughey bound bay had quite a demanding campaign as a junior, recording eight outings, and even though she won only a maiden, she collected places at the Graded stage. Most notably, she finished third in the G1 Fillies’ Mile behind Inspiral. In 2022, she commenced the season with a bang in the Classic trial, and subsequently, she denied the odds in the 1000 Guineas, scoring the prestigious event from the front by a neck.

The performance was just a superb one, positioning Cachet among the elite of three-year-old fillies, which she affirmed with her performance in the French 1000 Guineas. Running from the front again, Cachet fought bravely in the closing stages; however, this time, one rival, Mangoustine, caught her off guard with a powerful finish.

Still, the daughter of Acclaim should start off as the second chance here behind the already mentioned Inspiral. The John and Thady Gosden trained filly signed off her junior campaign as unbeaten. After winning her maiden, she easily handled a Listed company, then prevailed in the G2 May Hill Stakes before securing her premiere G1 victory in the Fillies’ Stakes.

The daughter of Frankel has been a joy to watch running, always travelling beautifully and willingly leaving all her rivals behind thanks to a brilliant turn of foot. This filly is pure class, and if she overcomes the fact she’s just beginning the season 2022, anything but a victory will render disappointment.

When talking about Cachet and Inspiral, it seems necessary to deal with Prosperous Voyage as well. This respectably consistent filly trained by Ralph Beckett recorded seven starts in 2021, while none of her three outings in the Graded company meant for her worse placing than third.

Inspiral twice defeated her, and in the 1000 Guineas, her finish wasn’t enough only to better Cachet. Without a hint of doubt, Prosperous Voyage is an awesome filly capable of running another big race here. Mangoustine represents French colors here, and we’re honestly eager to see how whether she repeats her brilliant performance from the French Classic.

The last to mention is Discoveries, trained by Jessica Harrington, who was only seventh in the 1000 Guineas; still, she is a G1 victress from 2021 and might return to form after her premiere outing in 2022.

Is Inspiral. She should be good enough even at her seasonal debut.