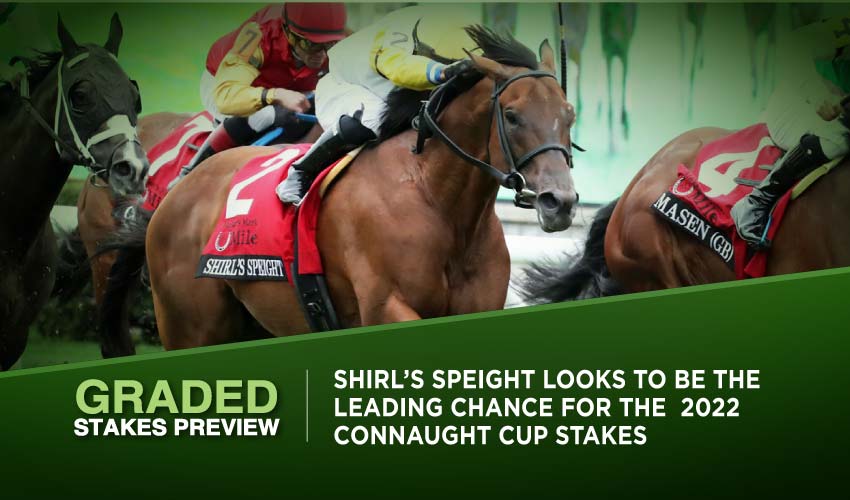 This weekend Woodbine offers some Graded action. On Saturday, the G2 2022 Connaught Cup Stakes will take action, where Shirl’s Speight is the favorite, while Lady Speightspeare could be the best in the G2 Dance Smartly Stakes on Sunday but Wakanaka is also a victory candidate here. In the G3 Hendrie Stakes, Boardroom looks ready to deliver another victorious run.

This G2 turf race is open to three-year-old and older horses who will cover the distance of seven furlongs. A field of 14 contestants will vie for the purse of $175,000, while Shirl’s Speight looks to be the leading chance.

The five-year-old horse achieved his first Graded victory in 2020 and had to wait for another one until February 2022, when Shirl’s Speight bagged the G3 Tampa Bay Stakes. Subsequently, the Roger Attfield bound bay narrowly delivered also in the G1 Maker’s Mark Mile Stakes at Keeneland, upon which he finished fourth among the elite.

Last time out, he took only third place at the G3 stage, losing by large margins; still, he faced Hot Rod Charlie back then. In Saturday’s company, he should fight for the victory, but as the field is quite competitive, he needs to be at his best to score it actually. William Mott relies on seven-year-old Chewing Gum, who showed up in the pleasant form in 2022 as he triumphed in his only seasonal start – the G2 Joe Hernadez Stakes.

If he displays a similar will to win on Saturday, he’ll be a tough nut to crack. Together with Shirl’s Speight and Silent Poet, he’s about to carry one of the biggest weights here. The other mentioned contestant, the Nicholas Gonzales trained Silent Poet, is also considered despite the fact his current form isn’t anything extraordinary; however, he is the winner of the last year’s G1 Highlander Stakes and deserves some respect.

Regarding the less carrying participants, Filo di Arianna piques some interest as the former Brazilian star failed at his two Graded attempts in the US, but for his trainer Mark Casse; he delivered in two Allowance races. Last time out, the four-year-old was impressive, and there is quite a chance he’ll continue in the suggested progress. Surly Furious is a Listed winner, successful at the Presque Isle Downs and might have a say also in this company.

Filo di Arianna as he’s talented, while the weight advantage over Shirl’s Speight should show.

On the turf surface, eight three-year-old and older fillies and mares will clash at the distance of a mile and a half of a furlong. The $200,000 G2 race attracted especially Lady Speightspeare trained by Roger Attfield, who scored at the G1 scene in 2020 and in 2022, she added her second G2 to the record.

Although she had to settle for a series of defeats from February to May, the four-year-old filly returned to the winning ways in July thanks to a brave effort in the G2 Nassau Stakes over a mile. Back then, the chestnut set the pace and prevailed by a length. On Sunday, she’ll carry the most significant weight, which shouldn’t entirely stop her, but it’s possible that Wakanaka might better her.

The ex-Italian four-year-old bay has hit the US tracks four times for William Mott and placed on three occasions, including the G1 Just a Game Stakes, where she finished second. Her performance was even boosted by the subsequent Graded success In Italian, who was third in that race, and therefore, Wakanaka looks primed to achieve her premiere Graded victory in the US as in Italy, she bagged the G3 Oaks.

Mark Casse relies here on a trio of contestants, while Fev Rover could be the best, given she recorded third place in the last year’s British 1000 Guineas and even then ran well at the Graded stage plus earned some money in Bahrain.

Munnyfor Ro could snatch up a fine place after winning two black-type events, with Seasons might draw on her promising Allowance victory.

Wakanaka, whose progress could be enough to earn some Graded glory.

In this G3 race, three-year-old and older fillies and mares will clash over the distance of six and half a furlong. On the all-weather track, they will compete for the purse of $150,000, with Boardroom looking ready to add another Graded victory to her record.

The five-year-old mare has nine outings under her belt, from which she earned six wins and three places, being quite a smart servant for trainer Josie Carroll. After finishing second in the G2 Bessarabian Stakes in 2020, she then ran just twice in 2021, but both G3 attempts resulted in victories.

In the ongoing season, Boardroom took second place at the G3 stage and last time out, she triumphed in the G2 Royal North Stakes due to which she’s about to carry the biggest weight on Sunday. Still, she is smart enough to handle it. Artie’s Princess will carry the same weight as she scored a black-type race in June, but both times she clashed with Boardroom in the last couple of years concluded in her defeat.

Nevertheless, she’s the favorite’s main rival here, with Dynasty of Her Own and Amalfi Coast could snatch up a fine place. The former placed at the G3 level in 2022, and the latter has a lacklustre seasonal debut under her belt, but in previous years, she scored two Graded races and placed in the 2021 Hendrie Stakes in front of La Libertee.

To complete the list of the contestants, we need to talk about Hazelbrook who is also respected thanks to her promising seasonal debut in the Allowance race, where she narrowly prevailed, while Lorena finished second in a black-type last time out.

Must be Boardroom, as she’s classy and in form.